Neuroscience: You're Just a Machine & There's No Free Will 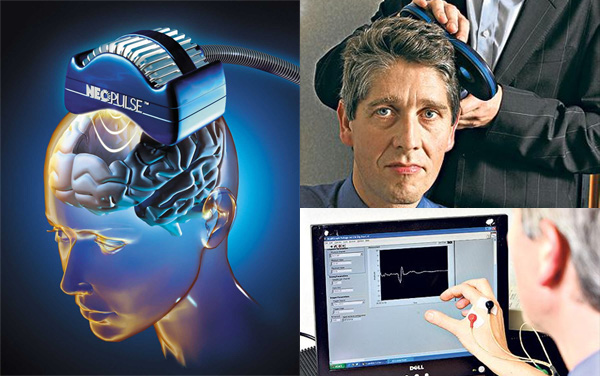 Magnetic coils are used to affect Prof Haggard's brain and control his body.
Our bodies can be controlled by outside forces in the universe, discovers Tom Chivers. So where does that leave free will?

For a man who thinks he's a robot, Professor Patrick Haggard is remarkably cheerful about it. "We certainly don't have free will," says the leading British neuroscientist. "Not in the sense we think." It's quite a way to start an interview.

We're in the Institute for Cognitive Neuroscience, in Queen Square in London, the nerve centre – if you will – of British brain research. Prof Haggard is demonstrating "transcranial magnetic stimulation", a technique that uses magnetic coils to affect one's brain, and then to control the body. One of his research assistants, Christina Fuentes, is holding a loop-shaped paddle next to his head, moving it fractionally. "If we get it right, it might cause something." She presses a switch, and the coil activates with a click. Prof Haggard's hand twitches. "It's not me doing that," he assures me, "it's her."

The machinery can't force Prof Haggard to do anything really complicated – "You can't make me sign my name," he says, almost ruefully – but at one point, Christina is able to waggle his index finger slightly, like a schoolmaster. It's very fine control, a part of the brain specifically in command of a part of the body. "There's quite a detailed map of the brain's wiring to the body that you can build," he tells me.

I watch as Christina controls Prof Haggard's fingers like a marionette. The mechanical nature of it is unsettling. A graph on a screen shows his muscle activity plotted by time; 20 milliseconds after she clicks the button, it depicts an elegant leap and drop, like a heartbeat on an ECG. That 20 milliseconds is how long it takes for the signal to travel down his nerves. "The conduction time would be less from my jaw muscles, more from my leg muscles," he says. And as many of us will recognise, the process gets less effective as we age: "As I get older, the curve will move slowly to the right on the graph."

The idea that our bodies can be controlled by an outside force is a pretty astonishing one. "This is absolutely out of my control," insists Prof Haggard, as his muscles continue to move. "I'm not doing it, Christina is. I'm just a machine, and she is operating me."

What does this mean in terms of free will? "We don't have free will, in the spiritual sense. What you're seeing is the last output stage of a machine. There are lots of things that happen before this stage – plans, goals, learning – and those are the reasons we do more interesting things than just waggle fingers. But there's no ghost in the machine."

The conclusions are shocking: if we are part of the universe, and obey its laws, it's hard to see where free will comes into it. What we think of as freedom, he says, is a product of complexity. "An amoeba has one input, one output. If you touch it with one chemical, it engulfs it; with another, it recoils.

"If you see a light go green, it may mean press the accelerator; but there are lots of situations where it doesn't mean that: if the car in front hasn't moved, for example. The same stimulus sometimes makes me press the accelerator, but sometimes the horn. We are not one output-one input beings; we have to cope with a messy world of inputs, an enormous range of outputs. I think the term 'free will' refers to the complexity of that arrangement."

Slowly, however, we are learning more about the details of that complexity. This, Prof Haggard says, has profound implications: philosophically, morally, and – most worryingly – legally. "We understand what brain areas are responsible for impulsive behaviour, and which bits are responsible for inhibiting that behaviour. There's a whole brain network associated with holding back from things you shouldn't do.

"What happens if someone commits a crime, and it turns out that there's a lesion in that brain area? Is that person responsible? Is the damage to the machine sufficient for us to exempt them from that very basic human idea that we are responsible for our actions? I don't know." He refers to a major project in America, where "lawyers, neuroscientists, philosophers and psychiatrists are all trying to work out what impact brain science has on our socio-legal sense of responsibility".

This runs shockingly contrary to the sense of freedom that we feel in terms of controlling our actions, on which we base our whole sense of self and system of morality. "As far as I know," says Prof Haggard, "all societies hold individuals responsible for their actions. Even in animal societies, individuals have reputations. Non-human primates adjust their behaviour according to how other animals will respond. Junior males will not steal from older males, because they know they'll get beaten up. That's the beginning of social responsibility; the awareness that your behaviour has effects on the behaviour of others, and can have good or bad consequences.

"It's a rule that we need to have as social animals. You couldn't have society unless, if you do something wrong, you pay for it. The question is, what do we do when people don't have the brain machinery to play by the rules – or decide not to play by them? That's not a scientific question. That's a moral one."

Maybe, I suggest, we've over-defined free will. Perhaps it doesn't exist in the mystical breaking-the-laws-of-the-universe way, but there is a sense in which this "me", this brain and body, responds to the world, reacts to information, tries to shape its environment; takes decisions. Can we not pull free will back to something more defensible? He taps his fingers.

"Yes, interacting intelligently with your environment might be enough. The philosophical definition of free will uses the phrase 'could have done otherwise'. I picked up the blue cup; could I have picked up the white one? Given the initial conditions, the world as it was, could I have acted differently?

"As a neuroscientist, you've got to be a determinist. There are physical laws, which the electrical and chemical events in the brain obey. Under identical circumstances, you couldn't have done otherwise; there's no 'I' which can say 'I want to do otherwise'. It's richness of the action that you do make, acting smart rather than acting dumb, which is free will."

Some philosophers – Robert Kane, and, famously, Karl Popper and John Eccles – have held out hope that quantum indeterminacy, the randomness at the level of the universe's finest grains, could rescue true freedom.

Prof Haggard is dismissive. "No one wants to be told they're just a machine. But there is simply nothing approaching convincing evidence for the quantum view. Popper and Eccles proposed that free will was due to quantum indeterminacy in the chemical messages that communicate between neurons.

"But none of that happens at the quantum level. From a physics point of view, it's macro-level." Besides, quantum activity is purely random, and randomness gives you no more freedom than determinism does.

Does this bother you, I ask? Being a machine? "I keep my personal and professional lives pretty separate," he says, smiling. "I still seem to decide what films I go to see, I don't feel it's predestined, though it must be determined somewhere in my brain.

"There's an idea in theology that our free will places us next to God. Milton describes this beautifully in Paradise Lost. We like to think we're wonderful, that we have this marvellous capacity. But we should be more impartial: perhaps we overestimate the value and the excitement of having free will."

On that note, I take my leave. Although really, I didn't have any choice.

Ed Comment: Speak for yourself "Professor" Haggard! You probably don't have a soul. Haggard is just another drone in the soulless scientific army (not acknowledging quantum physics) that is trying to make sense of the world and tell you that you're nothing more than a machine. This is the dumbest thing I've read in a long time. Just because our brain is influenced by transcranial magnetic stimulation (that causes muscle spasms), it doesn't mean that there is NOT a soul or consciousness in us that is making conscious decisions. However, I CAN see that people are slowly being turned into non-thinking amoebas.

Normally this kind of article is not even worth pointing out. There are a hundred of these coming out every month as we learn more about neuroscience, but it's a good example of where things might be heading. I can see a "danger" in the emerging "neuropropaganda". If you're coming from the point of view of someone like professor Haggard and think that we are nothing more than machines, operating on a static stimulus - response model or inputs and outputs, then the step to neurologically take control of human beings is not that far off. Morally, there would be nothing wrong with it. The justification is the crime aspect as detailed in the article. The logic might go something like this: Since your body (machine) is controlled by randomly generated signals or forces in the universe, many things can go wrong. Therefore, if we can just control those signals, then we could possibly prevent you from doing something stupid ...like killing somebody. This is morally acceptable because you have no soul, life as we know it is an accident. There is no greater purpose to your life. In fact, we're morally obligated to instigate this control.

This is "neuropropaganda", another small step in the dehumanizing transhumanist agenda, an agenda that is trying to convince you that you're nothing more than a body machine. Furthermore, it's the right thing to do to neurologically monitor, control and adjust you.