College students in Arizona can now take a class on “Hating Whitey.”

In a sign that America’s institutions of higher learning may be lost forever to the radical left, college students in Arizona can now take a class on “Hating Whitey.”

In line with the extreme academic discipline called critical race theory, which is prevalent on campuses across America, Arizona State University is now offering a course on “the problem of whiteness,” according to Campus Reform. 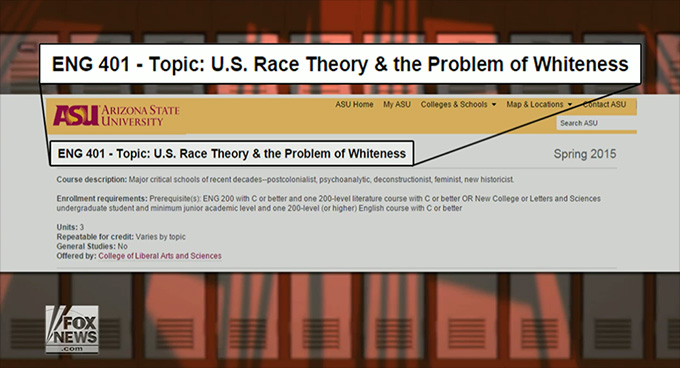 Critical race theory is a belief that relies heavily on the myth of institutional racism, the opinion that racism is inherent in America, brought on by white privilege and white supremacy.

And if that’s not bad enough, the class — ENG 401: “Studies in American Literature/Culture: U.S. Race Theory & the Problem of Whiteness” — is being taught by a white man.

Leave it to a white academic elitist, beset with “white guilt” no doubt, to corrupt the minds of young Americans with a theory driven by identity politics that has little basis in reality.

Campus Reform correspondent Lauren Clark, a student at Arizona State, joined Elisabeth Hasselbeck this week on “Fox and Friends,” and talked about the books associated with the course.

“All of the books have a disturbing trend, and that’s pointing to all white people as the root cause of social injustices for this country,” Clark said.

Related: The War Against Whites Is Massively Incentivized

MSNBC is of course trying to justify the course:

Eighteen students at Arizona State University are enrolled in a new, controversial English class about “the problem of Whiteness.”

Five books are listed as required for the upper-division class, called “U.S. Race Theory and the Problem of Whiteness.” The texts include “Playing in the Dark” by Toni Morrison, an acclaimed novelist who has won a Pulitzer Prize, a Nobel Prize and the Presidential Medal of Freedom.

The other required books are “Critical Race Theory: An Introduction” by Richard Delgado, “Everyday Language of White Racism” by Jane Hill, “Alchemy of Race & Rights” by Patricia Williams, and “The Possessive Investment in Whiteness” by George Lipsitz.

ASU issued a statement about the class:

“This course uses literature and rhetoric to look at how stories shape people’s understandings and experiences of race. It encourages students to examine how people talk about – or avoid talking about – race in the contemporary United States. This is an interdisciplinary course, so students will draw on history, literature, speeches and cultural changes – from scholarly texts to humor. The class is designed to empower students to confront the difficult and often thorny issues that surround us today and reach thoughtful conclusions rather than display gut reactions. A university is an academic environment where we discuss and debate a wide array of viewpoints.”

The idea of “Whiteness” as a concept, rather than just skin color, has been a popular topic for research and academic classes since the late ’90s. The study of “Whiteness” typically examines

Lauren Clark, an ASU student who is not in the class, said on the show that she is disappointed that the university is offering the course.

“Clearly we have a lot of work to go as a society in terms of racial tensions, but having a class that suggests an entire race is the problem is inappropriate, wrong and quite frankly, counterproductive,” she said on the show.

Bebout declined to comment Friday, writing in an e-mail that “the last 24 hours have been stressful with some of the vitriolic hate-mail that I have received.”