Ferromagnetism -- the simple magnetism of a bar magnet or compass needle -- has been known for centuries. In a second type of magnetism, antiferromagnetism, the magnetic fields of the ions within a metal or alloy cancel each other out. In both cases, the materials become magnetic only when cooled below a certain critical temperature. The prediction and discovery of antiferromagnetism -- the basis for the read heads in today’s computer hard disks -- won Nobel Prizes in physics for Louis Neel in 1970 and for MIT professor emeritus Clifford Shull in 1994.

"We’re showing that there is a third fundamental state for magnetism," says MIT professor of physics Young Lee. The experimental work showing the existence of this new state, called a quantum spin liquid (QSL), is reported this week in the journal Nature, with Lee as the senior author and Tianheng Han, who earned his PhD in physics at MIT earlier this year, as lead author. 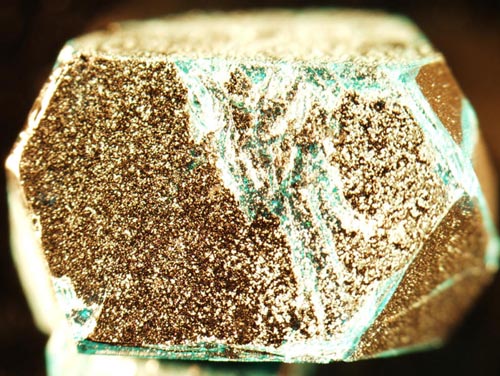 MIT physicists grew this pure crystal of herbertsmithite in their laboratory. This sample, which took 10 months to grow, is 7 mm long (just over a quarter-inch) and weighs 0.2 grams.
The QSL is a solid crystal, but its magnetic state is described as liquid: Unlike the other two kinds of magnetism, the magnetic orientations of the individual particles within it fluctuate constantly, resembling the constant motion of molecules within a true liquid.

There is no static order to the magnetic orientations, known as magnetic moments, within the material, Lee explains. "But there is a strong interaction between them, and due to quantum effects, they don’t lock in place," he says.

Although it is extremely difficult to measure, or prove the existence, of this exotic state, Lee says, "this is one of the strongest experimental data sets out there that [does] this. What used to just be in theorists’ models is a real physical system."

Philip Anderson, a leading theorist, first proposed the concept in 1987, saying that this state could be relevant to high-temperature superconductors, Lee says. "Ever since then, physicists have wanted to make such a state," he adds. "It’s only in the past few years that we’ve made progress."

The material itself is a crystal of a mineral called herbertsmithite. Lee and his colleagues first succeeded in making a large, pure crystal of this material last year -- a process that took 10 months -- and have since been studying its properties in detail.

"This was a multidisciplinary collaboration, with physicists and chemists," Lee explains. "You need both … to synthesize the material and study it with advanced physics techniques. Theorists were also crucial to this."

Through its experiments, the team made a significant discovery, Lee says: They found a state with fractionalized excitations, which had been predicted by some theorists but was a highly controversial idea. While most matter has discrete quantum states whose changes are expressed as whole numbers, this QSL material exhibits fractional quantum states. In fact, the researchers found that these excited states, called spinons, form a continuum. This observation, they say in their Nature paper, is "a remarkable first."

Read the full article at: sciencedaily.com