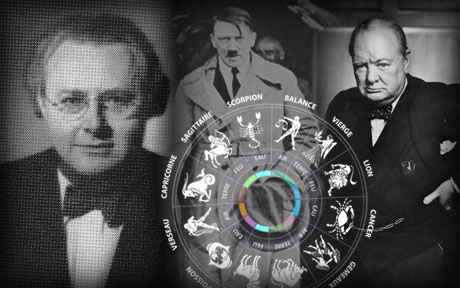 Louis De Wohl, Hitler & Churchill
If you believe the publicity machine, Louis De Wohl was the wartime astrologer employed by the British government to inform them, what advice the astrologer Karl Ernst Krafft was giving the Third Reich, and how astrology helped De Wohl win the war for Britain.

We really have only his own written record on this, and history must dictate a closer look and a re-appraisal.

Born Ludwig Von Wohl, on Jan 24th 1903 in Berlin, he like many Jews got into banking but his heart was in acting, he eventually found his way into writing small film scripts, and came to Britain as a Hungarian refugee, to offer his services, posing as one of Hitler’s astrologers, he claimed inside knowledge of Third Reich generals, and was taken on in Churchill’s Black team of occultists, eventually promoted to his own suite at the luxurious Grosvenor House Hotel in Park lane in 1940, and asked to produce horoscopes for both battle outcomes and the German high command.

Never a real astrologer, this was a cover for his position as part of the I.R.D.or Information Research Dept’s dirty tricks brigade, producing anti-German literature.

He had powerful friends, Litzi Friedman the wife of superspy Kim Philby, according to her wartime security file, ran the local Jewish underground cell that assisted the Soviet cause.

Abraham Gamse, under the name Abram Games, was Churchill’s producer of propaganda pictures and posters, and faked some superb photographs, Millionaire Phil Share ran safe houses, black marketeering and money laundering, Herbert Morrison who claimed to have the ear of Churchill all through the war when he was sober, ( Yuri Modin diaries ) was home office minister and a soviet sympathizer who was part of economic fund management, and a key link in the “Oneg Shabbat” ( wartime Jewish underground ) and it was when Morrison was Foreign secretary that the Guy Burgess and Donald MacLean Russian spy scandal exploded, it has never been discovered who warned them, but M I 6 is governed by the Foreign secretary, and the home office governs M I 5. Morrison had dominion over both positions.

Soviet masterspy Ruth Werner, alias Ursula Kuczysky ( codenamed Sonja ) whose own security file runs to over 70 pages, was to service Oxford, as Yuri Modin and others serviced the socialist traitors at Cambridge.

In her debriefings she refused to talk of Atom spy Klaus Fuchs, but did say she was protected by lord Rothschild, who also protected the “Cambridge Apostles” and it was Rothschild’s bank who in 1936 bought the services of Winston Churchill to lead the call for another war on Germany for 50,000 pounds, a huge sum in those days.

Kuczynsky also said that perhaps Britain’s most popular prime minister in contemporary polls, Neville Chamberlain was forced into resignation and died in Nov 9th 1940, she claims this was probably murder.

Critics have said Chamberlain was an “appeaser” to the Natzis, but Churchill was also an “appeaser” but to the Soviets, maybe that did not count, the intelligence community actually saw the Soviets as a bigger threat than the Germans.

Churchill changed parties 4 times in his career, and because of his initials W.C. he was known in parliament as “the shithouse” Britain later broke the Enigma codes and was reading all the German secret signals, we knew all about the concentration camps, but were forbidden by Rothschild to intervene.

Remember it was the Rothschild banking syndicate who funded both Britain’s war effort, and also that of the Germans.

Louis De Wohl as a member of the American screen writers guild, was connected to the U.S film industry, which was investigated so thoroughly by J. Edgar Hoover as “Un-American “ ex president Ronnie Reagan was a covert informant for many years.

After the war when Churchill was thrown out of office, he was given a bugged luxury suite at Claridge’s hotel, paid for by film magnate Allex Korda, real name Sandor Laszlo Kellner, and when Rothschild stopped paying the drinks bill, it was taken up by Film maker Sam Goldwyn.

Louis De Wohl was part of the team who went to the U S A to work secretly into dragging America into the war, and the British Security Coordination ( B S C ).

Led by William Stephenson, (A man called intrepid) ran 3000 sub agents working in secret producing race hate pamphlets, putting anti-German fake news on the radio and in the newspapers, such claims as Hitler was insane, homosexual or physically malformed, and wanting to attack America and divide it into 5 zones ruled by the SS, and wanting to be king of the world was common place.

Leaflets telling people that anyone either supporting German views, or not supporting American entry into the war, were to have their tyres let down, their families attacked and be the victim of other nuisance tactics.

De Wohl in the U.S.A worked from the Rockefeller Centre in Manhattan to widen the scope for profit in the war, with the secret connivance of President Roosevelt and the C.F.R, Dre Wohl was given restricted war info, to boost and bulk out his fake predictions, and charged vast sums to interested punters for individual planetary charts, while wearing fake army uniforms or dressed in women’s clothing.

The forerunner to the C.I.A the O.S.S have some amusing comments in the agent’s comments section, yet he was to marry the novelist and activist Ruth Feiner, and later was to write several rather good catholic inspired novels.

Herbert Morrison was to say he was the best card sharp he ever met, and was a familiar character drinking in the pubs of London’s Edgware Rd, his close friend Harry Etting remembered his large cigars, card tricks and fake gold headed notepaper.

An intelligent and very funny man at times, his part in Churchill’s “Black Team” often referred to in wartime documents as the “Black group” was to produce propaganda and distort the truth, they produced spurious Nostradamus pamphlets which were dropped over Germany, and the much used term “The Special Relationship” was coined by them, this of course never existed, America always demanded the highest possible price, and Churchill’s famous phrase, “The Iron Curtain” was actually from a suffragette speech in W.W.1.

Their combined knowledge of the occult was used to great effect by the Information Research Dept, who was behind the revenge prosecution of medium Helen Duncan for revealing the sinking of the Hood, the Barham, and the merchantman Wilhelm Gustoff with the loss of 8000 German civilian lives, so great a war crime was this that it is still kept secret.

Ed Note: The Wilhelm Gustloff had very few survivors but interestingly on top of the list we find a Eva Rothschild.

* With thanks to all the ex intelligence personnel who contributed to this over 45 years.