Print media in the United States is now largely a failed business model that has been in secular decline for years.  While print media's failure is largely attributed to technological shifts that have changed consumers' media consumption behaviors, we would argue that biased reporting and a complete lack of journalistic integrity at many "real news" outlets facilitated the decline.  The American population has rejected the notion of paying for "journalistic integrity" only to get hyper-partisan, leftist, manufactured narratives in return.

That said, Mark Thompson, the President and CEO of the New York Times, is convinced that Silicon Valley's social media and search giants are to blame for failing print newspapers around the country.  And, like any good liberal, Thompson's first reflex to fix failing businesses is to provide subsidies...and apparently he thinks the tech titans should pay those subsidies.

But we also know that here in Detroit and almost every other city in America, many of our colleagues – who do not have the national and international opportunity of The Times, or our successful digital subscription model – are having a much harder time. Their ability to deliver real news – about city hall and the state legislature, about local schools and businesses, as well as about America and the world – is under direct economic threat.

Here too I believe that the search and social media platforms could play a role. The advertising which once paid for professional journalism across this country and the rest of the western world is now migrating to them. Far from helping, if anything initiatives like Facebook Instant Articles, which host news stories natively, seem to make it even hard for responsible publishers to get their business models to work.

In all but a handful of cases like The Times with large audiences, deep engagement and real subscription potential, it’s easier today to make a profit on search and social from fake news than it is from the real thing. Where will that take us if uncorrected? The big search and social companies must do more to sustain the economics of real journalism.

But while Thompson lectured attendees of the Detroit Economic Club about the risks of "fake news" yesterday, we find it supremely "ironic" that the New York Times also announced the hiring of Glenn Thrush, of Politico, who described himself as a political "hack" and was repeatedly caught sending advance copies of articles to Hillary campaign staff for approval ahead of publishing (see "New York Times Hires Politico's Self-Described "Hack" Who Sent Stories To Clinton For Approval").  Is that not "fake news," Mark?

As a quick reminder, WikiLeaks revealed that Thrush sent the following email to Podesta back in April 2015:

Please don't share or tell anyone I did this

Tell me if I fucked up anything 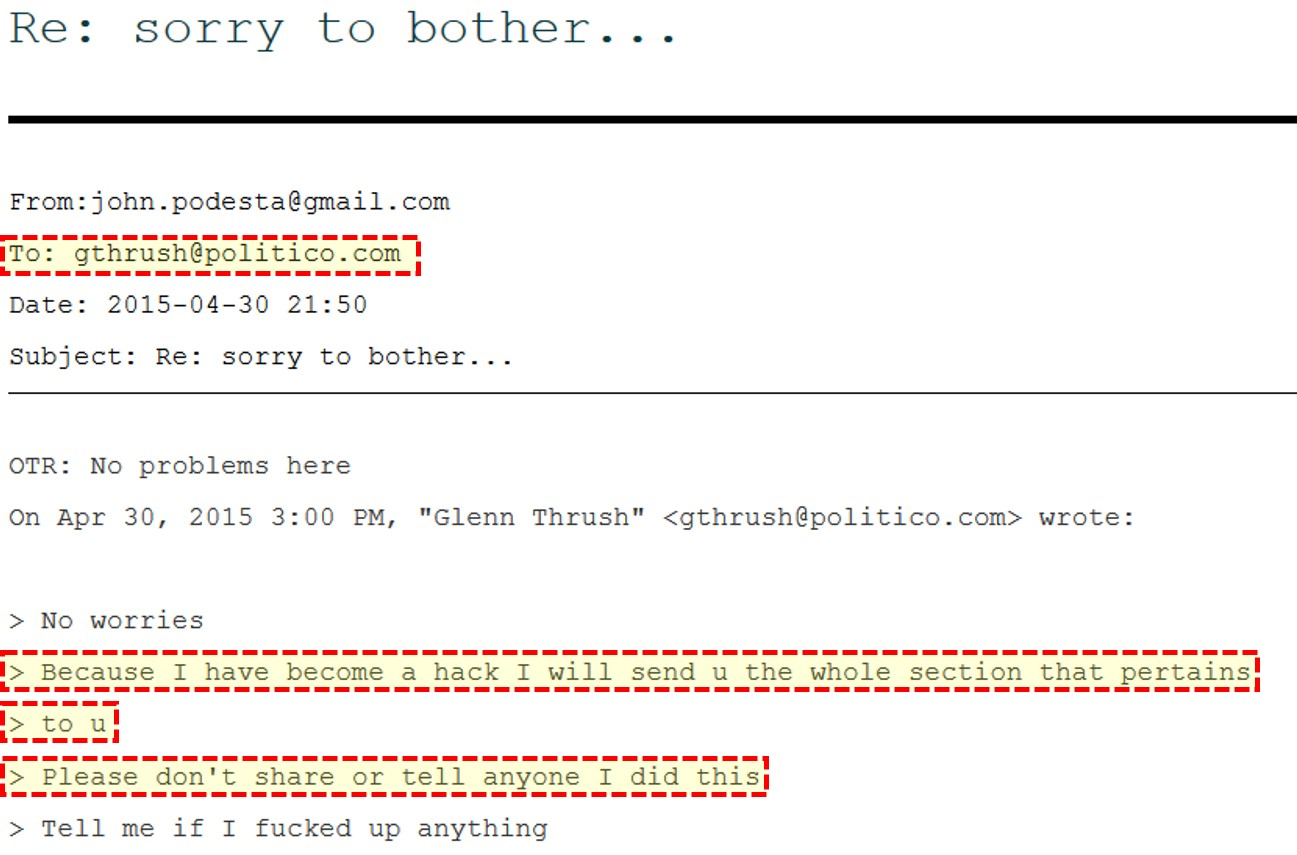 And while, Thompson rambled on endlessly about Pizzagate and other "fake news" stories, we couldn't help but wonder whether he could share his evidence proving that Russia hacked John Podesta's emails...certainly given the frequency of articles written on the topic and the grave nature of the accusations, which if proven accurate could threaten our democracy, combined with the ultimate journalistic integrity of the New York Times must imply that they have been able to uncover some fairly convincing, tangible evidence, right?

But Pizzagate is only a single drop in what has become a springtide flood of false information.

Fake news is not new. The spreading false rumors for political advantage, for pure malice, or just for entertainment, is as old as the hills. Supermarket checkout magazines have been assuring us for decades that Elvis never died at all and is alive and well and eating unhealthy snacks inside a replica of the Sphinx on the surface of Mars.

And yet what’s happening now feels different. Whatever its other cultural and social merits, our digital eco-system seems to have evolved into a near-perfect environment for fake news to thrive. In addition to enthusiastic domestic myth-makers, it’s easy for hostile foreign governments and their proxies not just to initiate a fake news cycle – it is now widely accepted that it was Russian hackers who broke into John Podesta’s emails and gave them to Wikileaks, beginning the chain of events that led to Pizzagate – but to intensify it, and on occasion even to manage it with armies of human “trolls” and cyber botnets. This is a form of what the military calls “black psy-ops”, in other words covert psychological operations.