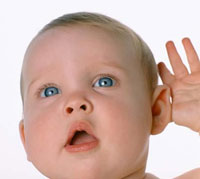 Just hours after they’re born, babies seem to be able to tell the difference between sounds in their native tongue and a foreign one, according to a new study that suggests language learning begins in utero.

"The mother has first dibs on influencing the child’s brain," researcher Patricia Kuhl, of the University of Washington, said in the statement. "The vowel sounds in her speech are the loudest units and the fetus locks onto them."

Researchers examined 40 babies (an even mix of girls and boys) in Tacoma, Wash., and Stockholm, Sweden. At about 30 hours old, the infants in the study listened to vowel sounds in their native language and in foreign languages. The babies’ interest in the sounds was measured by how long they sucked on a pacifier wired to a computer.

The study found that, in both countries, the infants listening to unfamiliar sounds sucked on the pacifier for longer than they did when exposed to their native tongue, suggesting they could differentiate between the two. Lead author of the study, Christine Moon, a professor of psychology at Pacific Lutheran University in Tacoma, said the results show that fetuses can learn prenatally about the particular speech sounds of a mother’s language.

"This study moves the measurable result of experience with speech sounds from six months of age to before birth," Moon said.