May 6, 2007 By Henrik Palmgren | redice.tv
I am quite involved with many alternative agriculture
groups, and I received this email from a trusted
friend...you might want to check it out for your news
section... 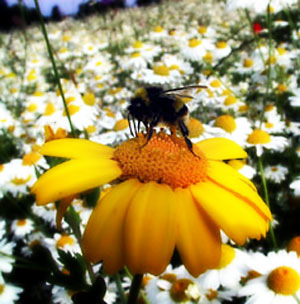 "Sharon Labchuk is a longtime environmental activist and part-time organic beekeeper from Prince Edward Island. She has twice run for a seat in Ottawa's House of Commons, making strong showings around 5% for Canada's fledgling Green Party. She is also leader of the provincial wing of her party. In a widely circulated email, she wrote:

I'm on an organic beekeeping list of about 1,000 people, mostly Americans, and no one in the organic beekeeping world, including commercial beekeepers, is reporting colony collapse on this list. The problem with the big commercial guys is that they put pesticides in their hives to fumigate for varroa mites, and they feed antibiotics to the bees. They also haul the hives by truck all over the place to make more money with pollination services, which stresses the colonies.

Her email recommends a visit to the Bush Bees Web site at Here, Michael Bush felt compelled to put a message to the beekeeping world right on the top page:

Most of us beekeepers are fighting with the Varroa mites. I'm happy to say my biggest problems are things like trying to get nucs through the winter and coming up with hives that won't hurt my back from lifting or better ways to feed the bees.

This change from fighting the mites is mostly because I've gone to natural sized cells. In case you weren't aware, and I wasn't for a long time, the foundation in common usage results in much larger bees than what you would find in a natural hive. I've measured sections of natural worker brood comb that are 4.6mm in diameter. What most people use for worker brood is foundation that is 5.4mm in diameter. If you translate that into three dimensions instead of one, it produces a bee that is about half as large again as is natural. By letting the bees build natural sized cells, I have virtually eliminated my Varroa and Tracheal mite problems. One cause of this is shorter capping times by one day, and shorter post-capping times by one day. This means less Varroa get into the cells, and less Varroa reproduce in the cells.

Who should be surprised that the major media reports forget to tell us that the dying bees are actually hyper-bred varieties that we coax into a larger than normal body size? It sounds just like the beef industry. And, have we here a solution to the vanishing bee problem? Is it one that the CCD Working Group, or indeed, the scientific world at large, will support? Will media coverage affect government action in dealing with this issue?

These are important questions to ask. It is not an uncommonly held opinion that, although this new pattern of bee colony collapse seems to have struck from out of the blue (which suggests a triggering agent), it is likely that some biological limit in the bees has been crossed. There is no shortage of evidence that we have been fast approaching this limit for some time.

We've been pushing them too hard, Dr. Peter Kevan, an associate professor of environmental biology at the University of Guelph in Ontario, told the CBC. And we're starving them out by feeding them artificially and moving them great distances. Given the stress commercial bees are under, Kevan suggests CCD might be caused by parasitic mites, or long cold winters, or long wet springs, or pesticides, or genetically modified crops. Maybe it's all of the above...

Discuss this article in the forum