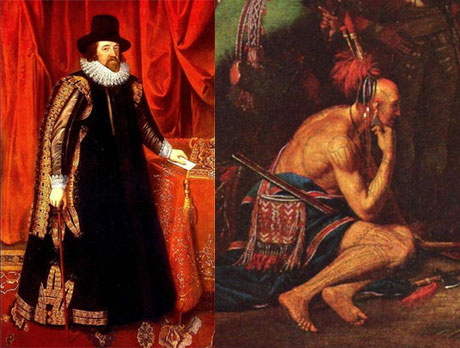 Left: Francis Bacon author of The New Atlantis. Right: A detail from Benjamin West's The Death of General Wolfe; West's idealised depiction of this American Indian is in the tradition of the "Noble savage"
The late Joseph Campbell maintained that civilizations are not based on science, but on myth. “Aspiration,” Campbell explained, “is the motivator, builder and transformer of civilization.” Our technological society has been built on Francis Bacon’s myth of the New Atlantis.

Competing with Bacon’s vision of a scientific society based on intelligence, knowledge and innovation, is an older, more persistent fable: the Noble Savage. The Noble Savage is not a person, but an idea. It is cultural primitivism, the belief of people living in complex and evolved societies that the simple and primitive life is better. The Noble Savage is the myth that man can live in harmony with nature, that technology is destructive and that we would all be happier in a more primitive state.

Before Christ lived, the Noble Savage was known to the Hebrews as the Garden of Eden. The Greeks called it the lost Golden Age. In all the ages of the world, otherwise intelligent and learned persons have fallen swoon to the strange appeal of cultural primitivism. In the 16th century, French writer Michel de Montaigne described Americans Indians as so morally pure they had no words in their languages for lying, treachery, avarice and envy. And Montaigne portrayed the primitive life as so idyllic that American Indians did not have to work, but could spend the whole day dancing.

In 1755, Jean-Jacques Rousseau argued that what appeared to be human progress was in fact decay. The best condition for human beings to live in, according to Rousseau, was the “pure state of nature” in which savages existed. When men lived as hunters and gatherers, they were “free, healthy, honest and happy.” The downfall of man occurred when people started to live in cities, acquire private property and practice agriculture and metallurgy. The acquisition of private property resulted in inequality, aroused the vice of envy and led to perpetual conflict and unceasing warfare.

According to Rousseau, civilization itself was the scourge of humanity. Rousseau went so far as to make the astonishing claim that the source of all human misery was what he termed our “faculty of improvement,” or the use of our minds to improve the human condition.

Since Rousseau wrote, more than 250 years of archeological and ethnographic research have shown that most of the imaginative conceptions associated with the Noble Savage are simply wrong. Archeologist Steven A. Leblanc wrote that “warfare in the past was pervasive and deadly.” Conflict between bands of hunter-gatherers was universal and intense, and the practices of cannibalism and infanticide were common.

Before the Industrial Revolution disease and poverty were endemic, even in civilized societies. In 18th century Europe half of all children died before their 10th birthday, and life expectancy at birth was only 25 years.

Neither did pre-industrial civilizations live in a state of ecological harmony with their environment. Their exploitation of nature was often destructive. The Mediterranean islands colonized by the ancient Greeks were transformed into barren rock by overgrazing and deforestation. The Bay of Troy, described in Homer’s Iliad, has been filled in by sediment eroded from surrounding hillsides destabilized by unsustainable agricultural practices.

All of this would be of academic interest only, were it not the case that the modern environmental movement and many of our public policies are based implicitly on the myth of the Noble Savage. The fountainhead of modern environmentalism is Rachel Carson’s “Silent Spring.” The first sentence in “Silent Spring” invoked the Noble Savage by claiming “there was once a town in the heart of America where all life seemed to live in harmony with its surroundings.”

But the town Carson described did not exist, and her polemic, “Silent Spring,” introduced us to environmental alarmism based on junk science. As the years passed, Carson was elevated to sainthood and the template laid for endless spasms of hysterical fear-mongering, from the population bomb, to nuclear winter, the Alar scare and global warming.

The truth is that human beings have not, cannot, and never will live in harmony with nature. Our prosperity and health depend on technology driven by energy. We exercise our intelligence to command nature, and were admonished by Francis Bacon to exercise our dominion with “sound reason and true religion.”

When we are told that our primary energy source, oil, is “making us sick,” or that we are “addicted” to oil, these are only the latest examples of otherwise rational persons descending into gibberish after swooning to the lure of the Noble Savage. This ignorant exultation of the primitive can only lead us back to the ages when human lives were “nasty, brutish and short.”

David Deming is a geologist and associate professor of Arts and Sciences at the University of Oklahoma.