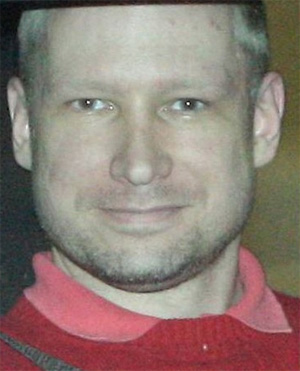 Remember that the hearings was closed to the public and the media. Classic Scandinavian style - an "open society" right.

The judge ordered that 32-year-old Andres Behring Breivik is to be detained without access to letters or visitors, apart from his lawyer. He’s getting four weeks in isolation. Maybe enought time to carry out more mind control experiments on Breivik.

Apparently the police knew the gunman’s name before the arrest he’s was on a intelligence watch list since March. Someone in Poland was said to be arrested, this is now being denied by Polish authorities.

Questions have been raised about why it took 90 minutes for the police to reach the island Utoya.

Breivik has said he was “surprised” he wasn’t stopped sooner.

In an article from the telegraph, Breivik now claims that he was recruited to a secret society in London and that he guided by an English “mentor”.

We don’t know the truth about this "secret society" or English "mentor", this could be nonsense put out by Breivik to further confuse the investigation. It could be the truth but it could also be the spin of the "advisers" and the "" behind the scenes.

Tragedies are always used for political purposes. This will justify another hunt for a "new kind of terrorist" that isn’t really there.

This might even change the fact that you have the right of meeting in "secret" or doing things in "secret". Even if you might not agree to how the masons do business, I think most people value their privacy and right do do what they want to do - without the knowledge of authorities or other people ...as long as it doesn’t hurt anybody.

Now your thoughts and opinions are the target and all the "insane ideas" that are spreading on the internet.

Be sure that laws will be put in place, guns will be banned and nationalism will further be branded as "extremism".

It’s also a reminder that the mainstream press instantly falls in line with whoever the establishment designates the enemy du jour to be at any given time. Now that Muslims have been so vehemently demonized as terrorists, it’s the turn of so called “right-wing extremists,” or anyone who disagrees with mass immigration, loss of sovereignty and globalist financial looting, to feel the heat.

The effort to smear European conservatives as unhinged radicals who harbor simmering urges for bloodlust is now in full swing, and it’s a demonization campaign firmly founded on the carefully crafted public portrayal of Anders Behring Breivik.

This tragedy is now in the hands the media, the police and the politicians.

They are now spinning a web designed to further trap anybody that have valid points of criticism against how society is being guided down the toilet.

Anders Behring Breivik had extensive links to the far-Right English Defence League, senior members of the group have admitted.

Breivik was understood to have met leaders of the EDL in March last year when he came to London for the visit of Geert Wilders, the Dutch Right-wing politician. Daryl Hobson, who organises EDL demonstrations, said Breivik, who told police there were “two more cells” ready to follow him, had met members of the group.

Another senior member of the EDL said Breivik had been in regular contact with its members via Facebook, and had a “hypnotic” effect on them.
Scotland Yard was investigating Breivik’s claims that he began his deadly “crusade” after being recruited to a secret society in London, and that he was guided by an English “mentor”. David Cameron, who was being kept updated on developments, said Breivik’s claims were being taken “extremely seriously”.

Breivik wrote of having strong links with the EDL, saying he had met its leaders and had 600 EDL members as Facebook friends.
Mr Hobson said in an online posting that: “He had about 150 EDL on his list … bar one or two doubt the rest of us ever met him, altho [sic] he did come over for one of our demo [sic] in 2010 … but what he did was wrong. RIP to all who died as a result of his actions.”

Another senior member of the EDL, who spoke to The Daily Telegraph on condition of anonymity, said he understood Breivik had met EDL leaders when he came to Britain to hear Wilders speak in London last year.

“I spoke to him a few times on Facebook and he is extremely intelligent and articulate and very affable,” said the source. “He is someone who can project himself very well and I presume there would be those within the EDL who would be quite taken by that. It’s like Hitler, people said he was hypnotic. This guy had the same sort of effect.”

The source said Breivik began making friend requests with EDL members on Facebook in 2009 and knew “three or four” people in the group.

Breivik told his Facebook friends he would be coming to London for Wilders’s visit. “I remember he [Breivik] was on Facebook saying that he felt he had to come over. Maybe he thought it was the only chance he’d get to come to a big demo,” said the source.

“Geert Wilders was a high-profile anti-Islamic politician, coming to Britain. Everyone was raving about it.

“He [Breivik] was obviously in contact with some of us. If this bloke was coming all the way from Norway the leadership would have wanted to meet him.

“If there is someone who can put themselves across in an articulate way about the radicalisation and Islamisation of Europe then people at the top of the EDL are very welcoming.”

Breivik compiled a 1,518-page manifesto, written entirely in English under his Anglicised name, Andrew Berwick, in which he made repeated references to his British links and in particular his links to the EDL.

“I used to have more than 600 EDL members as Facebook friends and have spoken with tens of EDL members and leaders,” he wrote. “In fact, I was one of the individuals who supplied them with processed ideological material (including rhetorical strategies) in the very beginning.”

He also suggested that one of two English extremists who attended a founding meeting of the Knights Templar in London in April 2002 might have been a member of the EDL. “I wonder sometimes if one of the EDL founders was one of the co-founders of PCCTS,” he wrote. “I guess I’ll never know for sure.”

Breivik also wrote about an English “mentor” he named only as “Richard”.
Another alleged member of the EDL, Katie Hedderick, posted a comment on an online message board that suggested she had come across Breivik. She wrote: “OMG [Oh my God] … HIM?! He wrote some books and did talks didn’t he?”

The EDL had stated on its website that it had no links to Breivik. Stephen Lennon, the leader of the group, was unavailable for comment on the claims, but the EDL said journalists could attend a press conference with him on Tuesday if they paid a £50 fee.

Lennon, 28, of Luton, Beds, was convicted of using threatening, abusive or insulting behaviour by magistrates yesterday over a street brawl involving 100 football fans.

He was sentenced to a 12-month community rehabilitation order, 150 hours of unpaid work and banned from football grounds for three years.