Sep 21, 2011 Source: aftenposten.no
This one went under the radar. A VITAL news story from august 29th: 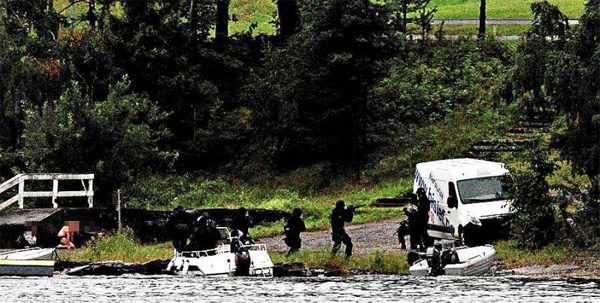 The Norwegian newspaper Aftenposten reports that police sources have confirmed that hours before Anders Behring Breivik launched his deadly attack at a political summer camp on Utøya island on July 22, police had conducted a drill for a “practically identical scenario.”

“Sources within the top level management of the police in Oslo have confirmed to Aftenposten that the drill finished at 15:00 that same Friday,” the newspaper reports. “All of the officers from the anti-terror unit that later took part at the bombsite at the government buildings and went out to Utøya to apprehend Anders Behring Breivik had been training on the exact same scenario earlier the same day and in the days preceding,” writes Andreas Bakke Foss.

The bomb attributed to Breivik went off only 26 minutes after the anti-terror drill finished, according to officials.

Norwegian police characterize the “very similar” drill and its chronological proximity to the “practically identical scenario” as a coincidence.

Question: If the police did these drills the same day, just hours before it ACTUALLY happened, how is it that they failed so miserably to reach the island in time to rescue more people?

See the nine minute long video off the police boats

The four days in advance, and also the same Friday that the attack was carried out, trained police special unit on an ongoing terror campaign that was approximately equal to the situation that hours later, met the 22 police officers in the emergency squad on Utøya.

Aftenposten is confirmed from key sources in the management of the Oslo police that exercise was terminated at 15 that same Friday.

All officers from the emergency squad that participated in the government quarter after car bomb and later came ashore on Utøya and arrested Anders Behring Breivik, had earlier that same day and in the days ahead participated in training on a very similar scenario.

So did the police so far to stop the exercise until they had trained on the reality.

The training shall thereafter Aftenposten know, have gone straight into the met police in Tyrifjorden the same day: a mobile terrorist attack in which one or more perpetrators only goal is to shoot as many people as possible and then shoot the police when they arrive.

- It was very close to the answer key. Chance would have it that way, says a key police source, who declined to quoted by name.

The police should not have trained in a scenario with as many victims as they met on Utøya.

Police special unit trains continuously. But every quarter, the “blocks” where they train to different types of scenarios.

These are different scenarios police envisions might occur where the emergency squad must be inserted. There may be actions indoors, in cities or out in other environments.

According to police, this is a scenario they train on several times a year and has trained for several years, especially after some events in other countries.

Only 26 minutes after training for emergency squad was closed, went car bomb in the government quarter. Emergency Squad was early room.

At 17.30 was the staff of the Oslo police told a shooting at Utøya. They attached so much trust in the message that the emergency squad sat in the cars they already had in its ministries and cars that came from the police station at Grønland in Oslo.

On the way they struggled to reach the North Buskerud Police District, but at 18.02, six minutes before they arrived, they contact and agreed to meet at Storøya.

There were seven people from the emergency squad and three officers from Nordre Buskerud Police District into a 4.9 meter long rubber dinghy. This was so heavily loaded that it began taking in water. The police were assisted by a civilian boat and drove towards Utøya.