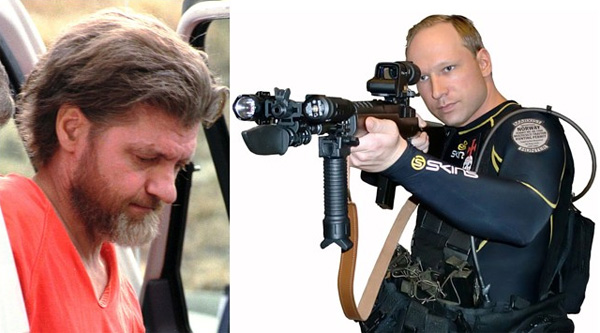 Anders Behring Breivik was thought to have worked nine years of his so-called manifesto. Now it turns out that large parts of the script is plagiarism - copied verbatim from a known American terrorist.

The site Document.no as Sunday reveals that some of Anders Behring Breivik’s book, called "2083 - A European Declaration of Independence," is straight out of the so-called Unabomber manifesto.

While Breivik several places in the text is careful to cite external sources, Theodore Kaczynski - known as the Unabomber - is not mentioned once.

Kaczynski is an American terrorist who was sentenced to life in prison for a series of letter bombs he sent to universities and airlines from the late 1970s to the mid-1990s.

Some online newspapers have already compared Kaczynskis manifest with the 1,511-page document Breivik posted on the Internet shortly before the terrorist attack.

Now it turns out that the Northern man simply copied large parts of the text.

But where Kaczynski reviews the enemy as "leftism" and "leftist," Breivik use the words "Multiculturalism" and "Cultural Communism."

- This must be a way of version 2.0 of the Unabomber Manifesto, says Aage Borchgrevink, advisor to the Norwegian Helsinki Committee, to NRK.no

"When we speak of leftist in this article we garden in mind Mainly Socialists, Collectivist, ’politically correct’ types, feminists, gay and disability Activists, Animal Rights Activists and the like."

With a few changes in wording, type Breivik the same:

Breivik has especially been inspired by the Kaczynskis theory that the left is suffering from a crippling inferiority complex.

"The two psychological Tendencies That underlie cultural Marxists we call ’feelings of inferiority’ and ’over-socialisation," repeats Breivik - without quoting.

Again, he has replaced "leftism" with "cultural Marxists". Apart from paraphrasing from American to British English is the wording is identical.

According to a source Document.no talked with Breivik has in several places replaced Kaczynskis use of "black" with the word "Muslim".

In a explanation about affirmative action, for example, Kaczynski writes:

"Hostility is too prominent a component of leftist behavior; so is the drive for power. More over, much leftist behavior is not Rationally Calculated to Be of benefit to the people WHOM the leftist claim to Be Trying to help. For example, if one believe That Affirmative action is good for black people, does it make sense two demand Affirmative action in hostile or dogmatic terms?"

Here Breivik not only replace "leftist" with "cultural Marxist", but also "black people" with "Muslim":

"Hostility is too prominent a component of cultural Marxist Behaviour, so is the drive for power. More over, much cultural Marxist Behaviour is not Rationally Calculated to Be of benefit to the people WHOM They claim to Be Trying to help. For example, if one believe That Affirmative action is good for Muslims, does it make sense two demand Affirmative action in hostile or dogmatic terms? "

Aage Borchgrevink is not surprised that Breivik wrote Muslim rather than black or dark-skinned.

Theodore Kaczynski, a.k.a. the Unabomber - A Volunteer in LSD Mind-Control Experiments Sponsored by the CIA 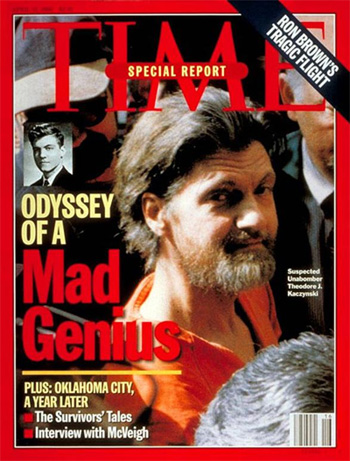 It turns out that Theodore Kaczynski, a.k.a. the Unabomber, was a volunteer in mind-control experiments sponsored by the CIA at Harvard in the late 1950s and early 1960s.

Michael Mello, author of the recently published book, "The United States of America vs. Theodore John Kaczynski," notes that at some point in his Harvard years--1958 to 1962--Kaczynski agreed to be the subject of "a psychological experiment." Mello identifies the chief researcher for these only as a lieutenant colonel in World War II, working for the CIA’s predecessor organization, the Office of Strategic Services. In fact, the man experimenting on the young Kaczynski was Dr. Henry Murray, who died in 1988.

Murray became preoccupied by psychoanalysis in the 1920s, drawn to it through a fascination with Herman Melville’s "Moby Dick," which he gave to Sigmund Freud, who duly made the excited diagnosis that the whale was a father figure. After spending the 1930s developing personality theory, Murray was recruited to the OSS at the start of the war, applying his theories to the selection of agents and also presumably to interrogation.

As chairman of the Department of Social Relations at Harvard, Murray zealously prosecuted the CIA’s efforts to carry forward experiments in mind control conducted by Nazi doctors in the concentration camps. The overall program was under the control of the late Sidney Gottlieb, head of the CIA’s technical services division. Just as Harvard students were fed doses of LSD, psilocybin and other potions, so too were prisoners and many unwitting guinea pigs.

Sometimes the results were disastrous. A dram of LSD fed by Gottlieb himself to an unwitting U.S. army officer, Frank Olson, plunged Olson into escalating psychotic episodes, which culminated in Olson’s fatal descent from an upper window in the Statler-Hilton in New York. Gottlieb was the object of a lawsuit not only by Olson’s children but also by the sister of another man, Stanley Milton Glickman, whose life had disintegrated into psychosis after being unwittingly given a dose of LSD by Gottlieb.

What did Murray give Kaczynski? Did the experiment’s long-term effects help tilt him into the Unabomber’s homicidal rampages? The CIA’s mind experiment program was vast. How many other human time bombs were thus primed? How many of them have exploded?

There are other human time bombs, primed in haste, ignorance or indifference to long-term consequences. Amid all the finger-pointing to causes prompting the recent wave of schoolyard killings, not nearly enough clamor has been raised about the fact that many of these teenagers suddenly exploding into mania were on a regimen of antidepressants. Eric Harris, one of the shooters at Columbine, was on Luvox. Kip Kinkel, who killed his parents and two students in Oregon, was on Prozac.

There are a number of other instances. Apropos possible linkage, Dr. Peter Breggin, author of books on Prozac and Ritalin, has said, "I have no doubt that Prozac can contribute to violence and suicide. I’ve seen many cases. In the recent clinical trial, 6% of the children became psychotic on Prozac. And manic psychosis can lead to violence."

A 15-year-old girl attending a ritzy liberal arts school in the Northeast told us that 80% of the kids in her class were on Prozac, Ritalin or Dexedrine. The pretext used by the school authorities is attention deficit disorder or attention deficit hyperactivity disorder, or ADHD, with a diagnosis made on the basis of questions such as: "Do you find yourself daydreaming or looking out the window?"

Ritalin is being given to about 2 million American schoolchildren. A 1986 article by Richard Scarnati in the International Journal of the Addictions lists more than a hundred adverse reactions to Ritalin, including paranoid delusions, paranoid psychosis, amphetamine-like psychosis and terror.

Meanwhile, uncertainty reigns on the precise nature of the complaint that Ritalin is supposed to be treating. One panel reviewing the proceedings at a conference on ADHD last year even doubted whether the disorder is a "valid" diagnosis of a broad range of children’s behavior, and said there was little evidence Ritalin did any good. In 1996, the Drug Enforcement Administration denounced the use of Ritalin and concluded that "the dramatic increase in the use of [Ritalin] in the 1990s should be viewed as a marker or warning to society."

Indeed. Land mines now litter the terrain of our society, waiting to explode.

Connection: Norway has been busy since WWII doing their own LSD experiments on kids