Breivik’s Terror: Was It a Deep Event?

The most surprising aspect of the recent unexpected terrorist violence in Norway is that, in retrospect, it is not surprising. Our revived hopes after the end of the Cold War, that we might finally be emerging into a world of diminishing bloodshed, have been abundantly disabused. Events of seemingly random irrational violence, such as that which so shocked us when President Kennedy was assassinated, have become a predictable part of the world in which we live.

To some extent we can blame the violence on our social system itself. It is clearly unsatisfactory, and needs fundamental reconstructions that nonviolent actions have been painfully slow to deliver. Thus violence slowly builds up at all levels, from the flash mobs of the hopeless at the base of society to the war schemes of those in high places. In such a milieu Anders Breivik is only one of many, from the Unabomber in America to the jihadi suicide bombers everywhere, who have chosen to dedicate themselves to sacrificial violence, rather than to an eventless survival in an alienating status quo.

But the backgrounds of some violent events are more mysteriously organized than, say, those of a resentful and quasi-spontaneous grudge killing or flash mob. For some time I have discussed acts such as the Kennedy assassination as what I have called deep events: events, obscured and/or misrepresented in mainstream media, whose origins are mysterious but often intelligence-related, attributed to marginal outsiders, but intersecting with large and powerful but covert forces having the power and the intent to influence history. More recently I have emphasized the need to analyze deep events comparatively, as part of an on-going hidden substrate in so-called developed societies. And to raise the question whether key deep events are interrelated.

Breivik’s mayhem on July 22, 2011, (henceforth 7/22) has forced me to clarify my definition of a deep event, to distinguish between those which are merely unsolved or mysterious in themselves, and those which have proved to be part of a larger systemic mystery grounded in the structures of either society itself, or its shadow underworld (demi-monde, Irrwelt), or in some combination of the two. As I wrote three years ago, “The unthinkable – that elements inside the state would conspire with criminals to kill innocent civilians – has become not only thinkable but commonplace in the last century.”1

There is no evidence that Unabomber’s actions, or the two assassination attempts against President Gerald Ford (by Lynette Fromm and Sara Jane Moore) were deep events in this second, more limited sense. The still not understood nerve gas attacks of 1995 in the Tokyo subway, by the Buddhist group Aum Shinrikyo, can be seen as a possible deep event.2 The attack on Pope John Paul II is a more probable one, because of the murderer’s membership in the Turkish Grey Wolves, an activist movement close to the Turkish security apparatus now known as Turkey’s gizli devlet or deep state.3

As examples of systemic deep events, we can point to two spectacular bombings in Italy, the Piazza Fontana bombing in Milan and simultaneous Rome bombing of 1969. These were initially blamed on marginal left-wing anarchists, but were ultimately revealed to have been false-flag attacks organized, as part of a strategy of tension, by right-wing neo-fascists inside the Italian military intelligence agency SISMI, with a possible green light (according to the chief of SISMI) from elements in the CIA.4 Since then an Italian premier has confirmed that the parallel intelligence structure responsible for the bombings was part of a stay-behind network, Gladio, which we now know was originally organized by NATO as a potential resistance in the event of a Soviet occupation of western Europe. Moreover, in the words of an Italian parliamentary commission, “Those massacres, those bombs, those military action had been organized or promoted or supported…by men linked to the structures of the United States.”5

In country after country, the Gladio networks soon deteriorated into activist anti-democratic cells with intelligence connections. They have been shown to have been behind other acts of violence, including the actions of the Grey Wolves in Turkey, and the Brabant massacres of 1983-85 in Belgium.6 Nor is this ancient history. In November 1990 Italian Premier Andreotti revealed that Italy, along with France and the other NATO countries, had just convened at a secret NATO Gladio meeting just the month before – i.e., after the fall of the Berlin Wall.7

This persisting presence of Gladio networks throughout Europe, including Norway, raises the question: was 7/22 a systemic deep event, or at least a possible deep event? Having pondered this for a month, my conclusions, all tentative except the first, are these:

1) Breivik most probably did not act alone, despite the latest official reports: “prosecutors and police have said they are fairly certain that Breivik planned and committed them on his own.”8

2) We should probably look for his associates in the demi-monde mobilized outside and against the state, rather than in the structures of the state itself.

3) 7/22 is probably not a traditional false-flag operation; the milieu of Breivik’s associates is indeed probably that pointed to, without incrimination, in the alleged Breivik manifesto and video.

4) The motive of 7/22 may have been to maximize publicity for the political message of one particular group in this milieu, the Euronationalist Knights Templar of former neo-Nazi turned counter-jihad publicist Nick Greger.

5) We should look behind the counter-jihad ideology of Breivik and Greger’s Knights Templar to the arms-for-drugs trafficking connections of their avowed heroes and contacts – particularly of the Serbian Mafioso and Red Beret veteran Milorad Ulemek.

6) Of particular interest are the criminal connections between the drug trafficker Ulemek (and possibly Breivik) and the Russian arms-and-drugs meta-group Far West LLC – a group I have discussed elsewhere for its involvement in systemic destabilization and conceivably even 9/11.9

7) Far West’s involvement in systemic destabilization was probably not just self-motivated, but had protection if not instigation from Far West’s connections to what David Rothkopf, in an important book, has called the illicit shadow elites that are part of the world’s elite superclass.10

8) Thus Norway’s terror, like comparable bombings in Italy and Turkey, illustrates, once again, the congruence between the dark quadrant of systemic destabilization (or what I once called “managed violence”) and the milieu of the international drug traffic.11

James Petras has wondered whether Breivik’s actions on 7/22 were part of a Norwegian strategy of tension on the model of Piazza Fontana. He has raised what he calls the “obvious question…as to the degree to which the ideology of right wing extremism – neo-fascism – has penetrated the police and security forces, especially the upper echelons?”12 He thus suspects the extreme delay of the police in reaching the island of Utøya – a suspicion enhanced by “confirmed reports in the Norwegian news media that Mr. Breivik had called the police several times during the attack on Utoya.”13

In response, the Norwegian peace researcher Ola Tunander has observed that the Norwegian security establishment and police resources are smaller than foreigners might imagine: “Norway is a small country with a relatively unified power structure, where everyone knows each other, and there is less of a clear split between the security forces and the political elite. Close friends of the Chief of Police, for example the Deputy Foreign Minister, were among those with children on the Utøya island."14

This may not close the debate. For Norway also had a Gladio stay-behind network, ROCAMBOLE (ROC), that was partly funded and controlled by NATO, the CIA, and the British service MI6. ROC was also controversial. In the 1950s a secret controversy arose from Norway’s discovery that an American in Norway’s NATO HQ had “spied upon high-ranking Norwegian officials.” The left-wing Norwegian intelligence chief who discovered this situation and protested it to NATO, Vilhelm Evang, was later forced out of office by other Norwegian security officials, as the indirect result of a secret allegation forwarded by CIA Counterintelligence Chief James Angleton.15 So Norway’s security apparatus was not entirely homogeneous and autonomous. 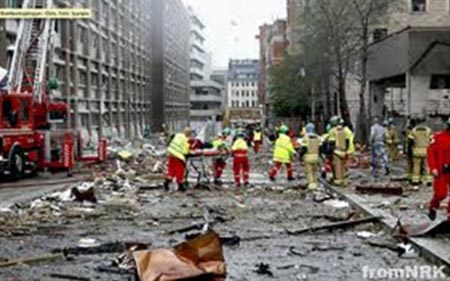 Whatever the facts, 7/22 must be distinguished from a classical false-flag event by Gladio stay-behind networks. Traditionally in such cases, the designated perpetrator was associated, not with right-wingers, but the left.

Breivik the man is unique, proclaiming his affiliations with both the Unabomber’s philosophy and the right-wing counter-jihad milieu. But 7/22 the event is more familiar, and presents a number of features that are also familiar from past deep events:

1) a “legend” or documented characterization of the perpetrator;

2) “planted clues,” or what I have elsewhere referred to as a “paper trail,” often including videos suitable for post-event promotion of the legend;

3) in particular, planted autodocumentation, a genre ranging in variety from the “historic diary” of Lee Harvey Oswald to the manifesto of the Unabomber;

4) a tested modus operandi for a mass bombing.

The word “legend” is a term of art from the intelligence world meaning a myth created around a person, usually to hide their real intent or loyalties.16 I use it here without prejudging the truth or falsity of the myth, or the related question of authorship. Above all, in what follows, I do not mean to imply that the myth can be dismissed as a cynical artifact. Indeed it seems clear that the author of the manifesto/video, whether Breivik alone or someone else, was consciously creating a myth of a crusade against Islam which they sincerely believed in.