Obama Granted Clemency Unlike Any Other President In History

In one more end-of-presidency act of clemency aimed at prisoners serving long sentences for drug-related offenses, President Obama announced Thursday that he is commuting the sentences of 330 prisoners. He has granted clemency to more people than any president since Harry S. Truman, and Thursday’s announcement was typical of how Obama’s approach to clemency has differed from that of his predecessors: Obama’s clemency is almost always given by freeing people from prison with commuted sentences, not pardoning people after their release.

On Tuesday, with less than a week left in office, Obama granted clemency to 273 federal inmates, including Chelsea Manning, the army intelligence analyst who was convicted in 2013 of disclosing sensitive information to WikiLeaks. Manning’s commutation was one of 209 that Obama made Tuesday; with the 330 from Thursday, his total number of commutations is now 1,715, more than any other president in history, according to the White House. Obama also issued 64 pardons this week.

Obama has granted dozens of pardons and commutations about once a month since August, and in December, he gave clemency to a record 231 federal inmates on a single day — a record that he broke on Tuesday and again on Thursday.

Although pardons are typically granted to people years after their release and serve as a formal gesture of forgiveness and a restoration of rights (such as voting for convicted felons), commutations can actually free people from prison. Manning, whose original sentence would have ended in 2045, is now slated for release on May 17. 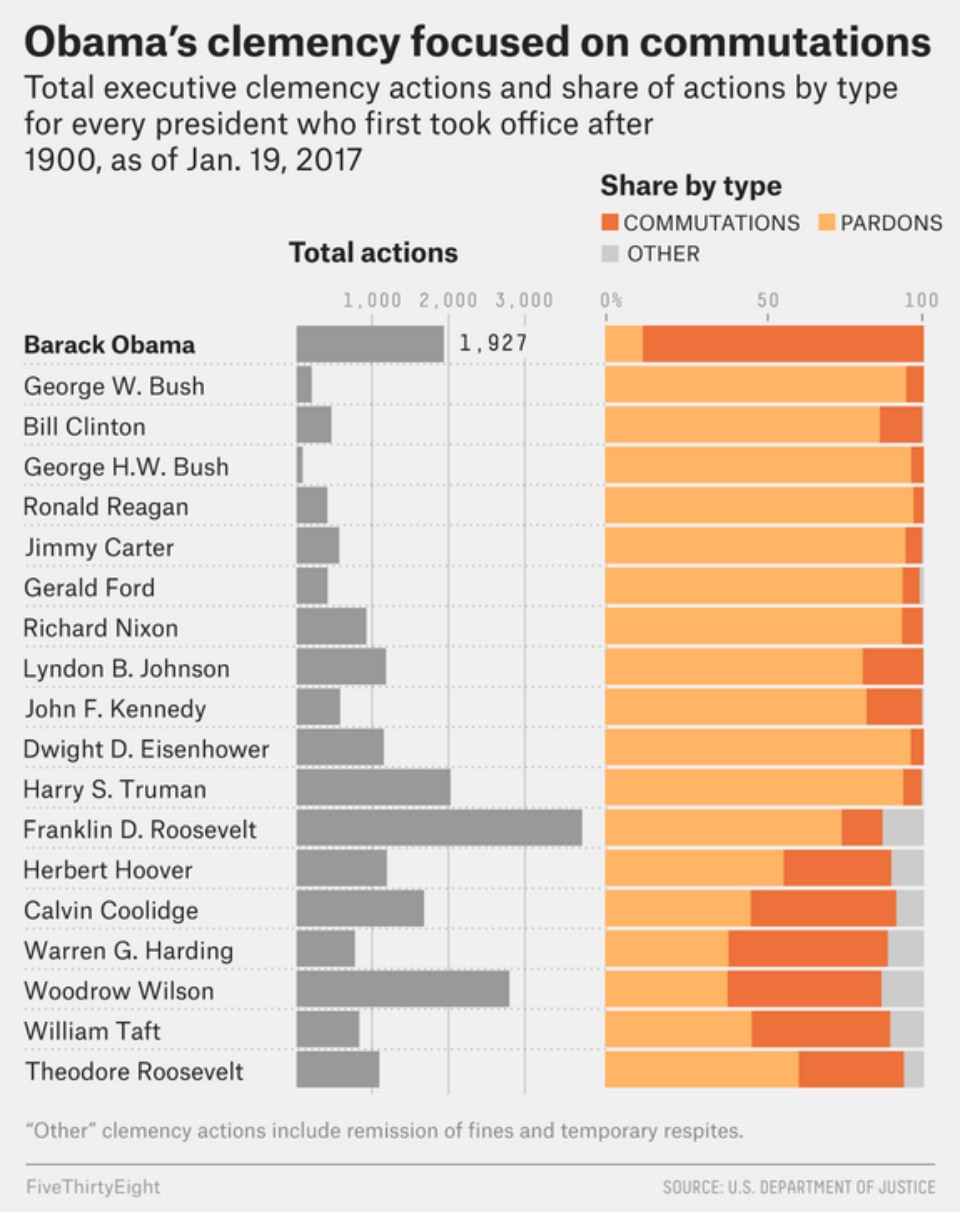 Among recent presidents that preceded Obama, commutations were much rarer than pardons because they tend to be politically riskier. When Bill Clinton commuted the sentences of 16 members of FALN, a group that wanted independence for Puerto Rico and claimed responsibility for more than 100 bombs in the United States, he received letters of protest from the Fraternal Order of Police and other law enforcement groups. President-elect Donald Trump has suggested that commutations create a risk by freeing prisoners who might reoffend.

But in his last year in office, Obama has not appeared to be overly concerned with the optics of freeing hundreds of prisoners. Along with Manning, Obama commuted the sentence of Oscar López Rivera, an FALN member.

In general, commutations have been a significant part of the Obama administration’s push for criminal justice reform. In 2014, the Justice Department announced an initiative to grant clemency to inmates who meet certain criteria, including that their sentences would have been shorter had they been convicted now. This is consistent with the Obama administration’s rethinking of the harsh “mandatory minimum” drug sentences of the 1980s. The number of new petitions for commutations nearly tripled to 6,561 in fiscal 2014 from 2,370 the year before. That number rose again, to 11,028 petitions, in 2016.

According to our analysis of Justice Department records, about 98 percent of Obama’s commutations through Tuesday were for prisoners convicted on drug offenses. And many of those, more than 60 percent of all commutations, were charged under conspiracy laws. Activist groups like the American Civil Liberties Union argue that these laws allowed low-level drug dealers to be unjustly charged with the more serious crimes that distributors often face.

As Obama prepares to leave the Oval Office on Friday, the future of the roughly 13,000 commutation applicants still waiting for a response remains uncertain. If history is any guide and Trump follows other recent presidents in granting relatively few commutations, it’s unlikely that many of them will see freedom any time soon.