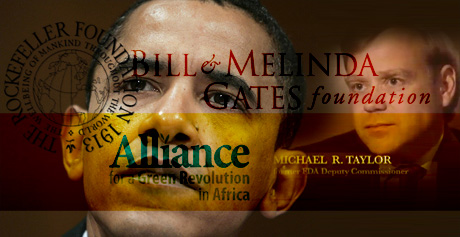 I am an African born in America, and I am an admirer and follower of Kwame Nkrumah, Marcus Garvey and Malcolm X. Therefore, this article caused me to have much concern about the direction in which Ghana is moving.

President Obama wishes to introduce the Rockefeller and Gates supported Green Revolution to Africa. He appointed Michael R. Taylor, VP for Public Policy at Monsanto from 1998 to 2001, as Senior Advisor to the Commissioner of the FDA. Taylor, with Rockefeller Foundation funding, authored two papers which tied US agricultural aid to Africa to the implementation of biotechnology, including pesticides and GM seeds.

The "Green Revolution" has led to financial ruin, suicide and cancer for many farmers and farm communities in India, Asia and Latin America. Please see Monsanto’s man in the Obama administration, with an eye on Africa

The Green Revolution has brought about many crop failures in Africa. This includes millions of dollars of lost income suffered by South African farmers when 82,000 hectares of genetically-manipulated corn (maize) failed to produce hardly any seeds. Monsanto offered compensation to those farmers who purchased seeds however, no compensation was offered to farmers who were given seeds (Please see Monsanto genetically modified corn harvest fails massively in South Africa)

In the 1990s, USAID, together with Monsanto, helped spearhead a 14-year, $6 million project through the Kenya Agricultural Research Institute (KARI) to develop a genetically modified, virus-resistant sweet potato. The project has proven to be a failure. Local varieties outperformed GM varieties in field trials. Researchers in Uganda developed a virus-resistant hybrid through conventional breeding techniques at a tiny fraction of the cost.

In the 1990's scientists from the US FDA (Food and Drug Administration) warned about the health problems associated with GMO foods. However, high-ranking officials in the FDA quashed these reports. According to documents released from a lawsuit, the scientific consensus from the agency was that GM foods were inherently dangerous, and might create hard-to-detect allergies, poisons, gene transfer to gut bacteria, new diseases and nutritional problems. (See Hazards of Genetically Engineered Foods).

The Ghanaian public must be made aware of the role of Rockefeller and Gates' Foundations in the negative eugenics movement. According to the Webster's Dictionary, negative eugenics is the "improvement of the genetic makeup of a population by preventing the reproduction of the obviously unfit."

According to, eugenics-watch.com the Rockefellers "funded the Kaiser Wilhelm Institute in Germany, when eugenicists were preparing the way ideologically for what eventually became the world's most infamous slaughter, the Nazi holocaust. The Rockefeller Institute supported Alexis Carrel, who advocated the use of gas to get rid of the unwanted."

The Rockefellers also funded the American Birth Control League (which later changed its name to Planned Parenthood) which was founded by Margaret Sanger. Sanger along with Dr. Clarence Gamble (of Procter & Gamble) proposed the "Negro Project" which would encourage Black Ministers to promote birth control in the Black Community. According to Sanger, Black Ministers were used because "We do not want the word to go out that we want to exterminate the Negro population, and the minister is the man who can straighten that idea out if it ever occurs to any of their more rebellious members." (See The Truth about Margret Sanger).

In her book, "Pivot of Civilization," Sanger also said that "Colored people are like human weeds and are to be exterminated." According to the Guttmacher Institute, Black Women have 37% of the abortions in the US, although they are only 13% of the total population. This equates to 1,216 aborted black children per day. Planned Parenthood performs 22% of all abortions in the United States and 80% of all of their clinics are located in non-white communities (see Abortion Rate Among Black Women Far Exceeds Rate for Other Groups).

Also, limiting population in Developing (read: Resource Rich) Countries has been a major tenet of US foreign policy since the 1970s. National Security Study Memorandum 2000 authored in 1974 by then U.S. Secretary of State Henry Kissinger and his deputy Brent Scowcroft stated "...the US economy will require large and increasing amounts of minerals from abroad, especially from less developed countries… Wherever a lessening of population pressures through reduced birth rates can increase the prospects for…stability, population policy becomes relevant to resource supplies and to the economic interests of the United States.” (see National Security Study Memorandum 200).

We must also keep in mind the "Billionaires Club" meeting which took place in May in a bid to curb the world's population. Among the participants were David Rockefeller Jr, Warren Buffett, George Soros, Ted Turner, Oprah Winfrey and Bill Gates. (see Billionaire club in bid to curb overpopulation).

President Obama insists that GMO food will be beneficial to Africa. However, he and the First Lady have established an organic garden at the White House and, primarily serve organic food to their children. See Michelle Obama’s Agenda Includes Healthful Eating and Obamas to Plant Vegetable Garden at White House and First Grandma: Michelle Obama's mom in White House.

The sign of a healthy democracy is an informed populace.