Official Working for the Swedish Government: "There Is No Native Swedish Culture." 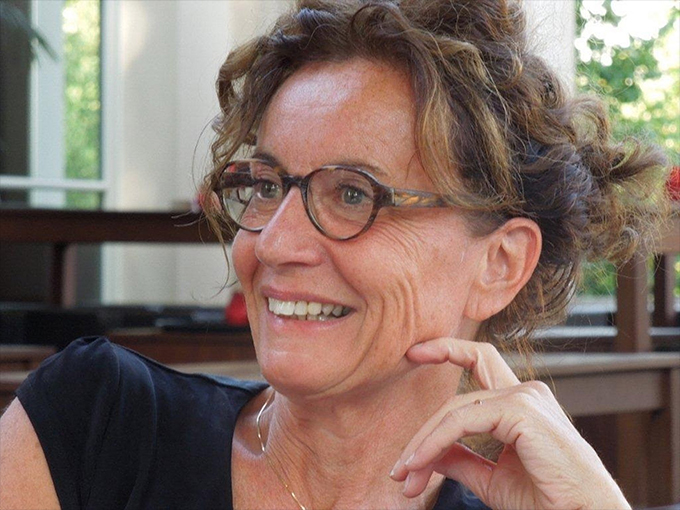 This brave woman, who is just such a counter culture rebel is trying to convince Swedes - yet again - that there isn't such a thing such as a "native Swedish culture."

This courageous woman, Ingrid Lomfors, who just happens to be Jewish, has not only been educated in Jerusalem at the Hebrew University. She's also been trained at the Hebrew collage in Boston. She is the general secretary at the Jewish Synagogue / Jewish Community in Stockholm, Sweden.

Currently she is the head of the "Forum for living history" in Sweden.

Well today right here dear reader is where you'll see a true history enthusiast share their knowledge and wisdom with you.

In a recent talk, given on October 12, 2015 to some of the establishment in the Swedish government, she gave the following three solid points:

1. “IMMIGRATION IS NOTHING NEW”

Comment: Exactly, so relax! The invasion you're seeing now into Europe is nothing new, I mean during the Migration Age there wasn't any real consequences due to it anyway. It's all just so very normal and you should embrace it goy. I think it's great these state puppets and propagandists have to continue to reassure us that everything is fine, once some topics heat up a bit too much.

2. “WE ARE ALL A CONSEQUENCE OF IMMIGRATION”

Comment: Oh yeah and also most of us alive today are a consequence of rape, somewhere down the line of our ancestors. So obviously every practice that has been a prominent feature of our past must naturally be a good thing and it most be brought back again, right Ingrid? So by that logic let's also bring back human sacrifice and slavery (although some of that still goes on in non-European countries).

Perhaps that's why you and all the state sponsored feminists in Sweden, don't speak up for your fellow women when they are getting raped, You can continue to ignore the rape epidemic in Sweden, Germany and in other European countries, but due to the recent invasion the numbers are now going to grow so fast, exponentially, that even you won't be able to stick your head in the sand any more. Thanks so much for helping to keep the lid on about this.

Here is the best one of her three:

3. “THERE IS NO NATIVE SWEDISH CULTURE”

Comment: Bah! Where do you even begin? Is this a HISTORIAN? Tells you how much they know about the culture of the country that they hate so much. We covered this aspect in the video we did on the housing crisis in Sweden due to the invasion. In that video we also focus on this common quackademic statement that there is no culture in Sweden.

We have, according to some finds, 40 000 years of history in Northern Europe. Even if it was only 20 000 years, would that somehow be less impressive? It's been proven that Scandinavians were the FIRST Europeans. To denigrate and try to erase our history, culture and achievements is frankly something only a myopic kosher certified historian like Ingrid could not only do, but also get away with. Thank you for revealing yourself and making your hatred of us so obvious.

Here is the video of the event (In Swedish):

She is not the first one and she won't be the last either. See this list for other examples:

Ervin Kohn: "Norway is TOO WHITE!"

This is just what they do.

We also have our own influence by these folks, such as Mona Sahlin 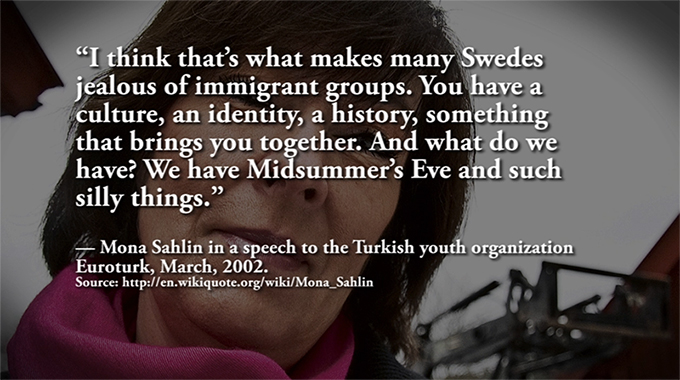 The kind of message that Ingrid Lomfors presents is applauded by the political establishment in Sweden. Circled in this screenshot from the event is the French imported King of Sweden and his Argentinian Wife, who by the way recently was accused of having "nazi ties" via her father. Well, here is the final proof that she is a radicalized racialist national socialist, by applauding the cultural - and literal - genocide of the Swedes, just like a true "nazi" would.

One of the questions we would post to the Hebrew educated propagandist and hater is:

WHY DON'T YOU GO TO ISRAEL AND PREACH YOUR IMMIGRATION MESSAGE?

Your country was LITERALLY founded just a few decades ago, in 1946, on a bunch of superstitious nonsense by fanatical extremists - who violently forced their way into a land already inhabited and you're COMING TO US, trying to say we don't have a legitimate claim to preserve who we are.

The immigration laws into Israel are very strict. They literally have a wall around them. You cannot get citizenship in Israel if you are not by DNA classified as jewish. They have lobby groups that try to discouage jews from marrying non-jews.

The Israeli Government openly exports African illegal immigrants to Sweden, so that we will have to deal with the problem.

There are also Jewish organizations and Israeli NGOs facilitating the invasion of Europe.

So Ingrid, why don't you look in the mirror. Go to your homeland and push the message on your own folks as opposed to us, who actually have a real national foundation to stand on.

Have a look at her wikipage as well. It reads like one of the most ethnocentric bios you could ever read with a mesmerizing fascination (fashist-nation) with jews and the nazis, writing book after book on this topic.

She is also married to Anders Carlberg, the former president of the Jewish Community in Gothenburg.

Why don't you just go to Israel! 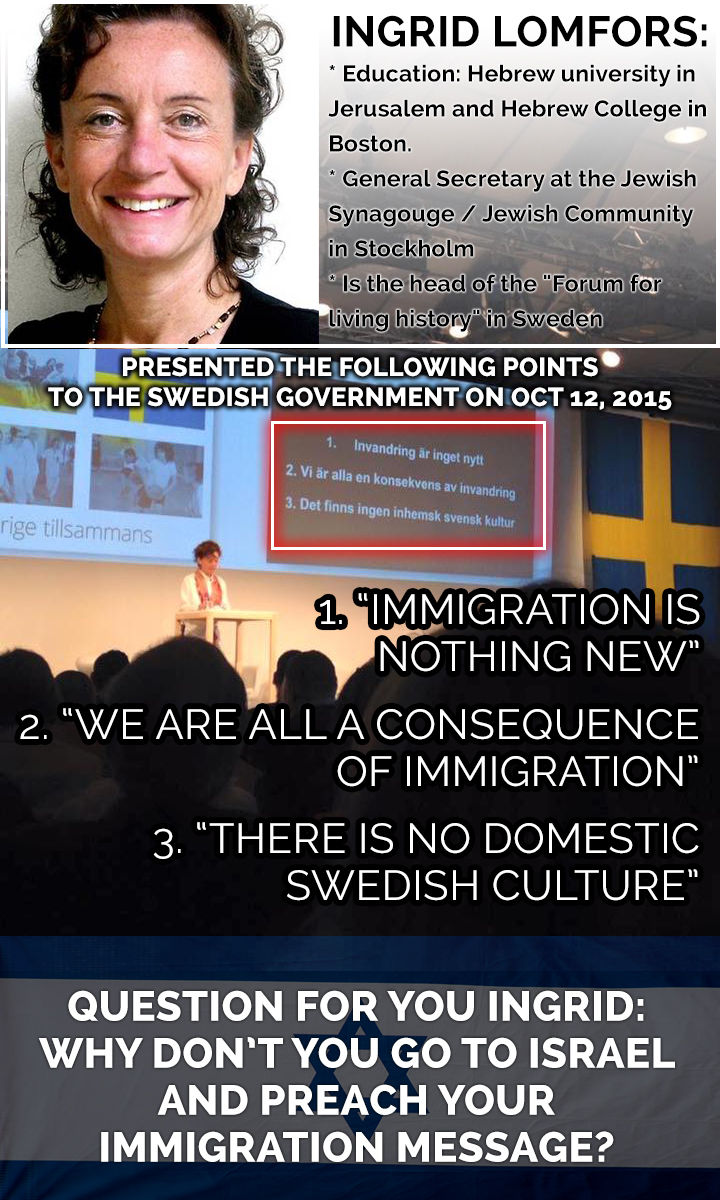 And, oh yeah, there is is no difference between Europeans and the invaders: