"This morning, wearing a dark suit, a white shirt and a dark tie, Omar Khadr, the Canadian citizen who was just 15 years old when he was seized after a firefight in Afghanistan in July 2002, ended an eight-year struggle -- first by the Bush administration, and then by the Obama administration -- to convict him in a war crimes trial at Guantánamo, when he accepted a plea deal in exchange for a reported eight-year sentence.

According to an article in the Miami Herald, drawing on comments made by “two legal sources with direct knowledge” of the deal, Khadr said he “eagerly took part in a July 28, 2002 firefight with US Special Forces in Afghanistan that mortally wounded Sgt 1st Class Christopher Speer.” This was the crux of the case against him, and a charge that he had always previously denied. He also apparently said that he had “aspired as a teen to kill Americans and Jews,” and described his father, Ahmed Said Khadr, who had been responsible for taking him on numerous visits to Pakistan and Afghanistan as a child, leading to the events on the day of his capture, as “a part of Bin Laden’s inner circle, a trusted confidant and fundraiser.”

Khadr’s plea was submitted to the judge, Army Col. Patrick Parrish, by his military defense lawyer, Army Lt. Jon Jackson, and Col. Parrish made sure that he knew what he was doing as he ran thought the charges. “Yes,’’ Khadr replied. “You should only do this if you truly believe it is in your best interests,” Col. Parrish then told him. “Yes,” Khadr replied again. According to the Miami Herald, his voice was “a near whisper,” but became stronger as Col. Parrish read out the charges." 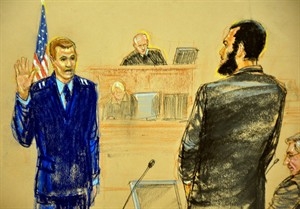 
The news of Omar Khadr’s guilty plea in Guantanamo today comes as no surprise to Cageprisoners and others who have been fighting for justice for him over the past decade. 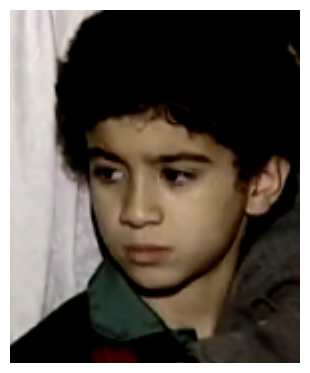 Khadr, Guantananmo’s youngest prisoner and last remaining western national, was brought into US custody barely alive, suffering horrific wounds. Despite his tender age he was not afforded the rights granted to children in a war zone and was designated an ’enemy combatant’ accused of killing a US soldier and other ‘war crimes’. 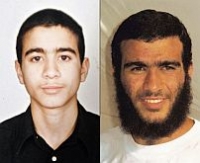 Omar Khadr, photographed before his capture, and at Guantanamo last year.
Over 600 people have been released from Guantanamo but none of them faced a transparent and internationally recognised legal process. Instead, most were repatriated to countries of origin or resettled in third-party nations (around 30). Six men left Guantanamo in a coffin while and others took plea-bargains. Within a period of three years all western nationals were repatriated and released to their countries of origin - all except for Australian David Hicks who took a plea-deal and returned to Australia shortly after and Salim Hamdan who returned to his native Yemen.

Offering a plea-bargain under the rules of the much discredited military commissions is an exercise in face-saving by the US administration - especially since the President Obama resurrected them instead of closing down the prison as he’d promised. 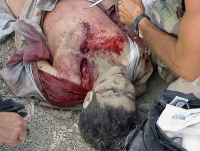 When the dust cleared, OC-1 saw Khadr crouched on his knees facing away from the action and wounded by shrapnel that had just permanently blinded his left eye, and shot him twice in the back.

Khadr was given on-site medical attention, during which time he repeatedly asked the medics to kill him, surprising them with his English. An officer present later recorded in his diary that he was about to tell his Private Second Class to kill the wounded Khadr, when Delta Force soldiers ordered them not to harm the prisoner. Source

“Under the circumstances, Omar Khadr accepting a deal should not be seen as an admission of guilt, rather it is one of the few but paradoxical ways of finding a way out of Guantanamo. Shamefully, the Canadian government was unwilling to do what almost all other western nations did: take back its own citizen and treat him with some level of dignity. Instead, even though he‘ll be repatriated he will now have to learn to live in a new prison environment all over again. This child who became an adult in the world‘s most infamous prison. At least though his family will be able to visit him and, his ordeal finally has an end date.”

Cageprisoners is a human rights NGO that exists to raise awareness of the plight of the prisoners at Guantanamo Bay and other detainees held as part of the War on Terror. We aim to give a voice to the voiceless.

Give a voice to the voiceless.