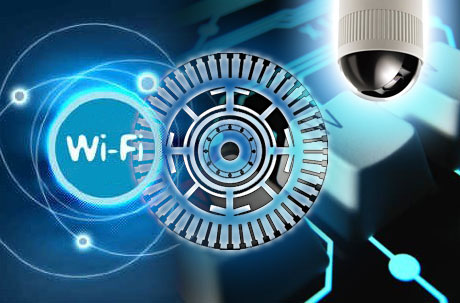 "...just by walking down the street you could be subject to a personal biometric system, you could be scanned by the gateway of the transit system, there could be something embedded in the street or in the flooring beneath you... you could be touching other tangible interfaces in the environment around you... the lamp posts and the other features of the streetscape could have informational services... and last but not least there's the surveillance element, there's a UAV, a robotic helicopter which is also surveying the cityscape and communicating with all of these devices... This is really what I mean by a transformation of the relationship between user and device. This person is not a user anymore in any real sense of the English world, they are a subject."

It may seem like a vision of a distant science fiction world, but this scenario laid out by Adam Greenfield, author of "Everyware: The Dawning Age of Ubiquitous Computing", could be just around the corner. In fact, at this very moment in South Korea an entire city, a "U-city", is being built that utilizes ubiquitous technology. It had it's first test run in March of last year. Several other countries are currently planning, or are currently building cities modeled around South Korea's U-city.

What exactly is Ubiquitous Computing?
An "Everyware" world, as Adam Greenfield calls it, is a world in which computers are embedded and merged seamlessly everywhere in the environment. Radio Frequency Identification (RFID) tags communicate their position and other information constantly in a vast network. Everyday objects become "searchable" as if they were part of the interconnected world wide web. Surveillance in an "Everyware" world is perfected to a degree that is unimaginable. Scientific management of people and the environment we inhabit becomes possible, and marketers' ultimate dreams come true.

(article continues below the videos)
Part 1


Part 8
As computer chips become smaller and their processing power increases exponentially, ubiquitous computing has become a practical reality. As Wired News reports, ubiquitous systems are to be rolled out in New York City next year,

"The Architectural League of New York invites architects, artists, designers, technologists, engineers, urbanists, or teams thereof, to submit qualifications for an exhibition that will critically explore the evolving relationship between ubiquitous/pervasive computing and urban architecture.

The League will commission five to seven teams to develop urban interventions–to be installed in and around New York City in spring 2009–that will imagine alternative trajectories for how various mobile, embedded, networked, and distributed forms of media, information and communication systems might inform the architecture of urban space and/or influence our behavior within it."

Consumer convenience is a central selling point for ubiquitous computing technology. The well established consumer base for mobile devices was discussed at the March 2008 International Conference on the Internet of Things in Zurich, Switzerland (sponsored by Google, IBM and others) as serving as a means of acclimating individuals to the presence and use of ubiquitous technology. Possible marketing plans were discussed to introduce "self scanning" through the use of mobile devices to "scan" physical products and browse the items on digital mobile screens in a manner similar to internet shopping. Andreas Schaller, a senior engineer for Motorola, presented information to the Zurich conference. Schaller's presentation is outlined in the conference proceedings,

"The next step is to Internetenable physical objects — connecting people with things and even things with things. The Internet of Things will enable connectivity not just between people and their computing devices, but between actual, everyday things. By enabling connectivity for virtually any physical object that can potentially offer a message, the Internet of Things will affect every aspect of life and business in ways that used to be the realm of fantasy — or even beyond fantasy.

To ensure a fast adoption rate it is necessary to start with low hanging fruit technologies like barcode scanning by camera, which will become a “free” feature for mobile devices morphing into high end camera phones."

Ubiquitous Surveillance
On top of the consumer layer of ubiquitous computing - which will likely be its most visible and emphasized aspect - sits the incredible surveillance capability of this technology. With video surveillance cameras protruding from every building it isn't very hard to figure out that you are being watched, but with the internet of things the surveillance grid is merged seamlessly and invisibly into the entire environment. In an internet of things, every object, as well as people who are wearing RFID tagged clothes or are using electronic devices, would be "readable" by a computer or wireless network. The object's (or person's) details, exact location and other information could be obtained electronically by invisible sensors in sidewalks, roads, or doorways.

In a document dated February 2000, Hewlett Packard's Internet and Mobile Systems Laboratory announced that, "We want to make people, places, and things web-present." The document details the infrastructure of the "internet of things",

"The convergence of Web technology, wireless networks and portable client devices provide new opportunities for computer communications systems designs. At HP Labs we have been exploring these opportunities through an infrastructure to support “web presence” for people, places and things. Our goal is a bridge between the World Wide Web and the physical world we inhabit. This bridge includes the ability to interact with devices such as printers from a browser using standard HTTP communication. It also includes the ability to provide people, places and things – electronic or otherwise – with a web resource that is used to store information about them and which is automatically correlated with their physical presence. We aim to provide users, particularly mobile users, with support for their everyday activities, which mostly concern physical objects other than PC’s." [emphasis added]

Marketers also see the rise of ubiquitous computing as opening the doorway to scientifically crafted advertising. Web history is already used to target computer users with ads based on their browsing behavior, and it is quite easy to see how that model could be applied to the "internet of things". Google is currently developing ad technology which uses your computer's microphone to listen to key words being spoken by you or your nearby television which triggers relevant ads on your computer screen. Mobile devices are already being tracked and monitored through stores and other public places in the U.K. for marketing purposes. According to the report,

"Foot traffic monitoring firm Path Intelligence, based in the city, is testing patent-pending surveillance technology that continuously tracks mobile phone signals to understand the movement of shoppers as they flow through retail centres or public amenities.

Through this technique, it is possible to gather data on how many people are in a store at a specific time, how many customers visit specific stores, and how shoppers group stores together. In addition, the firm says that the system can also help organisations optimize the layout of their space and improve their retail tenancy mix."

South Korea's U-City: A Model of the Future?
South Korea is at the forefront in implementing ubiquitous technology. An entire city, New Songdo, is being built in South Korea that fully utilizes the technology. Ubiquitous computing proponents in the United States admit that while a large portion of the technology is being developed in the U.S., it is being tested in South Korea where there are less traditional, ethical and social blockades to prevent its acceptance and use. As the New York Times reports,

"Imagine public recycling bins that use radio-frequency identification technology to credit recyclers every time they toss in a bottle; pressure-sensitive floors in the homes of older people that can detect the impact of a fall and immediately contact help; cellphones that store health records and can be used to pay for prescriptions.

These are among the services dreamed up by industrial-design students at California State University, Long Beach, for possible use in New Songdo City, a large "ubiquitous city" being built in South Korea.

Much of this technology was developed in U.S. research labs, but there are fewer social and regulatory obstacles to implementing them in Korea," said Mr. Townsend [a research director at the Institute for the Future in Palo Alto, California], who consulted on Seoul's own U-city plan, known as Digital Media City. "There is an historical expectation of less privacy. Korea is willing to put off the hard questions to take the early lead and set standards." [emphasis added]

A smaller U-city in South Korea, Hwaseong Dongtan, has already been partially completed and tested. A promotional video for the Hwaseong Dongtan U-City can be seen here. The heavily invested in U-City model of South Korea is currently being exported worldwide.

Interestingly, but perhaps not surprisingly, Bill Gates' Microsoft Corporation is involved with the technological development of South Korea's U-Cities. A Microsoft press release on May 9th of this year reported that,

"Microsoft Corp. will play a key role in creating a ubiquitous computing environment for future citizens and businesses of Songdo International Business District (IBD). The city of the future is currently under construction in Incheon just 40 miles southwest of Seoul, South Korea. Songdo will be the first “new” city in the world designed and planned as an international business district."

What will happen to traditional notions of privacy in an "Everyware" world? Could individuals and dissidents potentially be electronically blacklisted and denied access to cashless payment systems and transit systems as if they were a banned web page in the "internet of things"? It remains to be seen whether the ubiquitous computing infrastructure can be fully realized, but it is a technological trend with vastly important implications that is worth keeping an eye on.