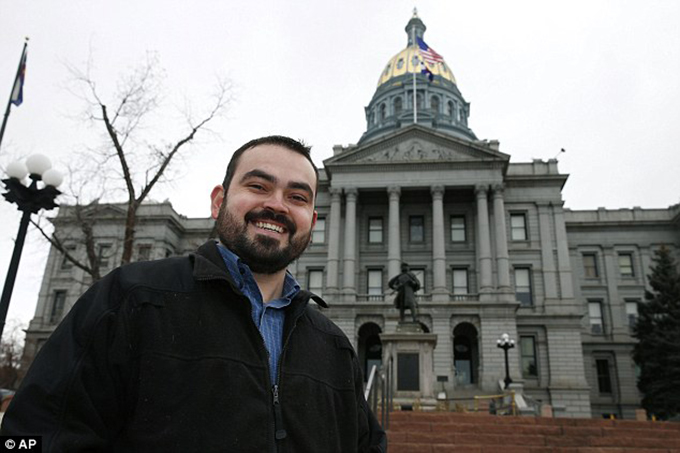 A Colorado restaurant owner catching fire for his barbecue joint's upcoming 'White Appreciation Day' claims the US is victimizing its white population - as he posted a quote from Martin Luther King Jr. to his Facebook page.

Edgar Antillon, one of Rubbin' Buttz BBQ and Country Cafe's owners, spoke out to Daily Mail Online about the June 11 event, which includes a 10percent discount.

Addressing critics, Antillon said 'I think they should actually know what the day is really about.'

He said the day was 'making a joke about the need of us having Black History Month and Hispanic Heritage Month, and understanding what we want to accomplish is eliminate the need for that.'

Antillon said 'We wanted to emphasize white appreciation because there's a lack of that. If anything, we're victimizing the white community because of what happened a few hundred years ago.'

Antillon said that slavery was horrible, 'but we have to move past that.'

'Is there still racism? Absolutely,' he said.

He also revealed the restaurant was forced to evacuate Friday because of a bomb threat.

When asked about patrons' reception of 'White Appreciation Day,' Antillon said 'There's been zero negativity, which is wonderful.'

'We're all Americans,' Antillon said. 'We're all from one country whether we were born here or not.'

Antillon had told KUSA, which first reported on the scheduled event, that he wasn't likely to offer other races discounts.

Antillon told Daily Mail Online everyone will be able to get ten percent off.

'That's something that's been there from the beginning,' he said. Customers from other races can get the discount if they ask for it, he confirmed.

Commenters on the Milliken restaurant's Facebook page have claimed that Rubbin' Buttz is offering a racist deal. Its Yelp page has also received a heap of negative one-star reviews, ever since the scheduled event was first revealed by KUSA.

'Wow, so much animosity over a simple point being made. A small business just trying to show that they won't embrace racism, reverse racism, bias and bigotry, in marketing, by offering an equal day of appreciation to a group that some people feel don't need it,' one Facebook user wrote. 'Some of these reactions alone show why it probably needs to be done.'

Another said 'I think it's great that you're doing this. I've always wondered when America would ever celebrate white heritage. Thank you!'

'I support you and thank you!! It's sad that people against this don't realize how racist THEY are being!!' one Facebook supporter said.

A Facebook commenter critical of the move asked 'What exactly are you in appreciation for, genocide of native americans, enslaving blacks, what exactly.'

'Do they realize this violates the law?' one Facebook comment read. 'You cannot discriminate on the basis of race and giving a discount to only your white customers is just that.'

A separate comment on the social media site said 'Sorry, but EVERY MONTH is white appreciation month...which is what the problem is. Same old white privilege.'