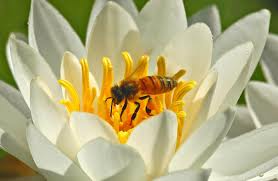 Experts have long believed there is a connection between bees, pesticides, and the worrying decline of the insect population.

Colony Collapse Disorder has puzzled and concerned scientists, and a new study has revealed that a common pesticide used on flowering plants (pyrethroid) stunts the growth of bees, making them smaller.

Smaller bees may be less effective at harvesting honey and pollination, vital to our food chain and environment.

Neonicotinoid pesticides have recently had a European ban on their use because of their negative effect on bees. As a result, it’s likely other types of pesticides, such as the pyrethroid pesticide used in the study, will continue to be applied in their absence.

More on the disappearing bees ...

[...]Scientists in the UK conducted laboratory tests which showed how a pyrethroid pesticide stunted the growth of worker bumblebee larvae, causing them to hatch out reduced in size.

Gemma Baron, one of the researchers from the School of Biological Sciences at Royal Holloway, University of London, said: "We already know that larger bumblebees are more effective at foraging.

"Our result, revealing that this pesticide causes bees to hatch out at a smaller size, is of concern as the size of workers produced in the field is likely to be a key component of colony success, with smaller bees being less efficient at collecting nectar and pollen from flowers."

The study, the first to examine the pesticides’ impact across the entire lifecycle of bumblebees, tracked the growth of bee colonies over a four month period.

Researchers exposed half the bees to a pyrethroid while monitoring the size of the colonies as well as weighing individual insects on micro-scales.

They found that worker bees from colonies affected by the pesticides over a prolonged period grew less and were significantly smaller than unexposed bees.

Findings from the study, funded by the Natural Environment Research Council (Nerc), appear in the Journal of Applied Ecology.

Professor Mark Brown, who led the Royal Holloway group, said: "Bumblebees are essential to our food chain so it’s critical we understand how wild bees might be impacted by the chemicals we are putting into the environment.

Read the full article at: theguardian.com