Police State UK: At last, a law to stop almost anyone from doing almost anything 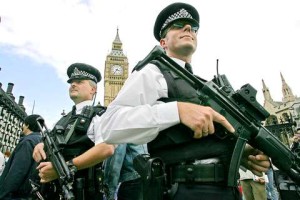 Until the late 19th century much of our city space was owned by private landlords. Squares were gated, streets were controlled by turnpikes. The great unwashed, many of whom had been expelled from the countryside by acts of enclosure, were also excluded from desirable parts of town.

Social reformers and democratic movements tore down the barriers, and public space became a right, not a privilege. But social exclusion follows inequality as night follows day, and now, with little public debate, our city centres are again being privatised or semi-privatised. They are being turned by the companies that run them into soulless, cheerless, pasteurised piazzas, in which plastic policemen harry anyone loitering without intent to shop.

Street life in these places is reduced to a trance-world of consumerism, of conformity and atomisation in which nothing unpredictable or disconcerting happens, a world made safe for selling mountains of pointless junk to tranquillised shoppers. Spontaneous gatherings of any other kind – unruly, exuberant, open-ended, oppositional – are banned. Young, homeless and eccentric people are, in the eyes of those upholding this dead-eyed, sanitised version of public order, guilty until proven innocent.

Now this dreary ethos is creeping into places that are not, ostensibly, owned or controlled by corporations. It is enforced less by gates and barriers (though plenty of these are reappearing) than by legal instruments, used to exclude or control the ever widening class of undesirables.

The existing rules are bad enough. Introduced by the 1998 Crime and Disorder Act, antisocial behaviour orders (asbos) have criminalised an apparently endless range of activities, subjecting thousands – mostly young and poor – to bespoke laws. They have been used to enforce a kind of caste prohibition: personalised rules which prevent the untouchables from intruding into the lives of others.

You get an asbo for behaving in a manner deemed by a magistrate as likely to cause harassment, alarm or distress to other people. Under this injunction, the proscribed behaviour becomes a criminal offence. Asbos have been granted which forbid the carrying of condoms by a prostitute, homeless alcoholics from possessing alcohol in a public place, a soup kitchen from giving food to the poor, a young man from walking down any road other than his own, children from playing football in the street. They were used to ban peaceful protests against the Olympic clearances.

Inevitably, more than half the people subject to asbos break them. As Liberty says, these injunctions “set the young, vulnerable or mentally ill up to fail”, and fast-track them into the criminal justice system. They allow the courts to imprison people for offences which are not otherwise imprisonable. One homeless young man was sentenced to five years in jail for begging: an offence for which no custodial sentence exists. Asbos permit the police and courts to create their own laws and their own penal codes.

All this is about to get much worse. On Wednesday the Antisocial Behaviour, Crime and Policing Bill reaches its report stage (close to the end of the process) in the House of Lords. It is remarkable how little fuss has been made about it, and how little we know of what is about to hit us.

The bill would permit injunctions against anyone of 10 or older who “has engaged or threatens to engage in conduct capable of causing nuisance or annoyance to any person”. It would replace asbos with ipnas (injunctions to prevent nuisance and annoyance), which would not only forbid certain forms of behaviour, but also force the recipient to discharge positive obligations. In other words, they can impose a kind of community service order on people who have committed no crime, which could, the law proposes, remain in force for the rest of their lives.

The bill also introduces public space protection orders, which can prevent either everybody or particular kinds of people from doing certain things in certain places. It creates new dispersal powers, which can be used by the police to exclude people from an area (there is no size limit), whether or not they have done anything wrong.

Read the full article at: stratrisks.com

The Birth of a Police State: UK Police to be Granted Sweeping New Powers
From: Scriptonite Daily

The UK Government is about to pass legislation which will make any behaviour perceived to potentially ‘cause nuisance or annoyance’ a criminal offence. The Anti-Social Behaviour, Crime and Policing Bill also grants local authorities, police and even private security firms sweeping powers to bar citizens from assembling lawfully in public spaces. The Bill has successfully passed through the House of Commons without issue, and is now in the latter stages of review by the House of Lords, after which it will receive Royal Assent and become Law. Those who refuse orders under the new rules will face arrest, fines and even prison time.

The Anti-Social Behaviour, Crime and Policing Bill, purports to simplify this legacy of New Labour’s legislative promiscuity. In reality, it creates a series of wildly ambiguous, generic orders which grant officers of the state and private sector even greater powers to issue tougher sentences, with fewer checks and balances to protect citizens.

Read the full article at: redicecreations.com