Professor in NY Times: White Americans should 'admit to the racist poison inside you' 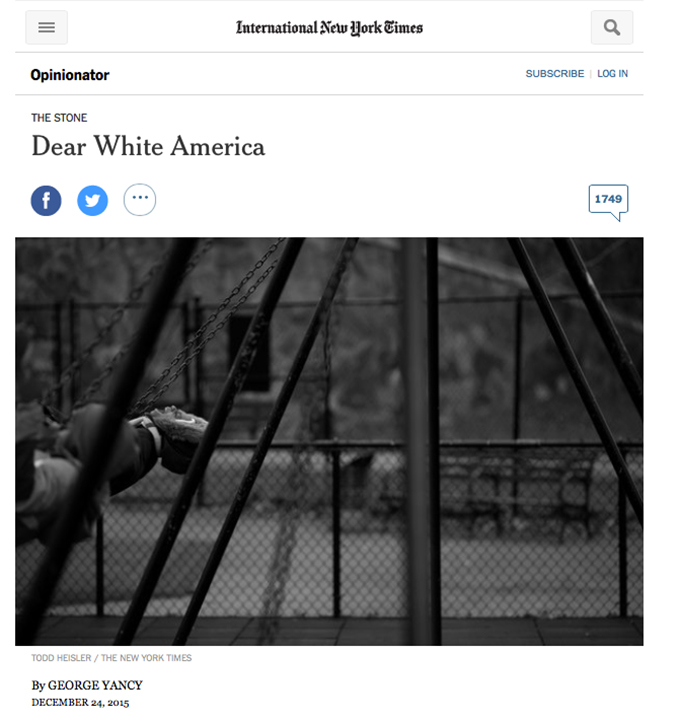 Nothing says “Merry Christmas” like a letter to white Americans calling them racist. Make no mistake, if you are white, you are racist.

As theBlaze pointed out, black professor George Yancy called on white America to examine the “racist poison that is inside of you.” And Yancy means all white America.

The letter was published in the New York Times on Christmas Eve titled “Dear White America.” Despite the sweeping generalization against an entire race, Yancy begins by claiming “I want you to listen with love.”

Yancy begins his letter by checking his own privilege and conducting his self-shaming in how he is a sexist. And these don’t even include active examples. As Yancy writes:

As a sexist, I have failed women. I have failed to speak out when I should have. I have failed to engage critically and extensively their pain and suffering in my writing. I have failed to transcend the rigidity of gender roles in my own life. I have failed to challenge those poisonous assumptions that women are “inferior” to men or to speak out loudly in the company of male philosophers who believe that feminist philosophy is just a nonphilosophical fad. I have been complicit with, and have allowed myself to be seduced by, a country that makes billions of dollars from sexually objectifying women, from pornography, commercials, video games, to Hollywood movies. I am not innocent.

When it comes to white America, Yancy continues with the same vein. This is something that you can’t hide from. And nobody “will get… off the proverbial hook.” If you’re white, you’re racist:

If you are white, and you are reading this letter, I ask that you don’t run to seek shelter from your own racism. Don’t hide from your responsibility. Rather, begin, right now, to practice being vulnerable. Being neither a “good” white person nor a liberal white person will get you off the proverbial hook. I consider myself to be a decent human being. Yet, I’m sexist. Take another deep breath… After all, it is painful to let go of your “white innocence,” to use this letter as a mirror, one that refuses to show you what you want to see, one that demands that you look at the lies that you tell yourself so that you don’t feel the weight of responsibility for those who live under the yoke of whiteness, your whiteness.

There need not be examples of active racism, as Yancy himself admits. But, by the mere color of their skin, white Americans are racist for benefiting from a racist society:

Before closing with “In peace,” Yancy also seeks to use the children of whites against them by inviting them to “see the miracle that is your child. And then, with as much vision as you can muster, I want you to imagine that your child is black.”

In peace indeed. White and female students may have an interesting time next semester at Emory University where George Yancy teaches.

Not Another ‘Dear White America’
From: dailycaller.com

As if “White America” didn’t have enough angry letters to read, The New York Times thought it was appropriate to publish yet another contribution to the bitter genre during the most joyful time of the year.

On Christmas Eve, George Yancy, an Emory University professor who specializes in Race and “Critical Whiteness Studies,” issued a message to white Americans in a Times op-ed creatively titled “Dear White America“: you are all racists.

“If you are white and you are reading this letter, I ask that you don’t run to seek shelter from your racism,” Yancy writes. “Being neither a ‘good’ white person nor a liberal white person will get you off the proverbial hook.”

According to the race philosophy expert, all minorities live under the “yoke of whiteness” and every Caucasian perpetuates racism with their mere existence. “As you reap comfort from being white, we suffer for being black and people of color,” Yancy explains in the heavy-handed prose typical of the letter.

He argues that since the American system was built for the benefit of white people, all whites share in its supposed cruelty. Yancy prefaced his argument by saying he himself is a “sexist” because he is a male in a society that oppresses women.

Anything that blacks may do wrong — such as commit crime — can be blamed on the ills imposed upon the African-American community by the inherently injust system.

The writer claims the knowledge he is imparting on his light-skinned readers is a gift of “love” that will allow them to wage “war” against “yourself, your white identity, your white power, your white privilege.”

Yancy also points out in the op-ed a few pasty leftists who agree with his assessment. Two academics with impeccable left-wing credentials admit that in spite of all their hard work, they’re still racist because security doesn’t follow them around in malls like the guards would do with African-Americans.

It would be nice if we could laugh these words off as the ramblings of a lone radical — if they weren’t published in the nation’s premier paper of record, if they didn’t mirror the work of the man the chattering class has deemed America’s foremost intellectual and if they didn’t reflect the spirit of the country’s current campus unrest.

The idea that all white people are inherently racist (or at least American society is racist) is fundamental to left-wing discourse circa 2015. This summer, Ta-Nehisi Coates’s new book, “Between the World And Me,” received rave reviews that bordered on devotional and earned his spot as the intellectual of choice for urban elites.

In the book, Coates argues America was founded upon the brutalization of “black bodies” and it is the nation’s original sin. Even to this day, our society is suffused with this latent racism and white people in particular can do little to remove the taint from themselves and the system we live by.

The one proposal Coates has in mind for whites to make any kind of amends for their history of evil is reparations — an idea that’s strongly opposed by most of the public.

The one notable stylistic difference between Coates and Yancy is that the super-duper, number one intellectual keeps his venom on an abstract societal level. Yancy brings it down to the individual Caucasian and lets the proverbial whitey know how bigoted he really is.

The big stylistic similarity between the two is the imagery of pain and degradation, which is used to heighten the perception of the black experience as one of unrelenting agony.

However, there is an educational aspect to reading Dr. Yancy’s letter and the works of Mr. Coates in both allow you to understand the radical mindset behind the present crop of college protesters. It is true that many of these kids are proving the entitled crybaby stereotype true by demonstrating for the right to not be offended. But there is something deeper and more troubling to all the madness.

The new outcry on college campuses is not over merely being offended — it’s against “systematic racism.” This notion says that institutions like universities are full of unintentional discrimination against people of color, and it makes college life unbearable for non-whites. With allusions to violence which seemed ripped straight from Coates himself, protesters claim that minority students are brutalized on a daily basis and they can no longer take the pain of living under systematic oppression.

The agony they supposedly live with is how they get away with shutting down opposing viewpoints and forcing out administrators on dubiously-thin charges. The argument also allows them to demand benefits that have little to do with restoring harmony to campus and are all about expanding the power of a specific racial group.

How does hiring staff based on the color of their skin rather than the quality of their resume make a school a less racist place?

To say this kind of rhetoric is divisive is an understatement. It stirs up racial animosity against one group of people and places all of the woes of the country upon their shoulders. It removes any degree of responsibility for the actions of minorities from themselves and allows them to blame all their problems on whites. Most troubling of all, it’s an insidious way to demand more power for people of a certain skin color — making racialism all the more attractive in our society.

While white liberals may go hogwild at being lectured on how racist they are, the rest of society will be repulsed by the idea. Contrary to Yancy’s wishes, the majority of Americans don’t want to live in a society where people are deemed racist solely due to their skin color.

In many ways, it sounds like inverted white supremacy — and the consequences for society accepting that idea could be just as bad as the days when America had Jim Crow.