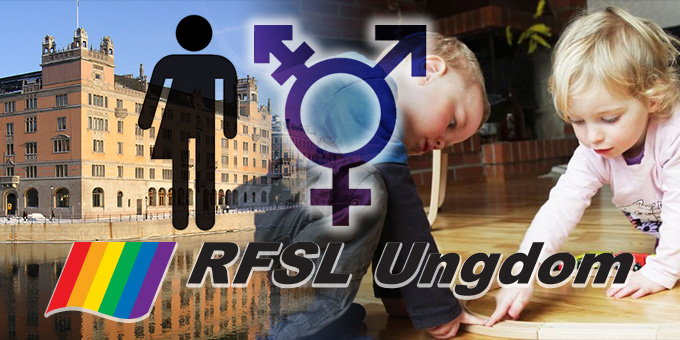 A recent investigation done by the Swedish government, propose to make it possible for children over 12 years to change their legal gender and for slightly older children to surgically remove their genitals. The investigation also suggests that the age limit should be lowered for gender reassignment surgery.

According to the investigation, conducted by the Ministry of Social Affairs on behalf of the Government, persons 15 years of age have the opportunity to decide on amending their legal gender, by application to the Swedish Tax Agency.

Even from the age of 12 it should be possible to undergo a "legal sex change," with guardian permission, according to the report.

A legal change of sex means that you get a new Social Security number. The study suggests, however, that young people over 15 years should be given permission to "engage in sexual organs or the removal of gonads," provided there is an approval from the Socialstyrelsen (The National Board of Health and Welfare) and from parents. Previously there has been a 18-year limit for that type of surgery.

Tax-financed RFSL (The Swedish Federation for Lesbian, Gay, Bisexual and Transgender Rights), which has long lobbied work for lowered age limit for sex change, welcomes the proposal. The organization regrets that the report does not propose that the age limit be eliminated entirely.

"In the years that RFSL Youth has pushed the issue concerning the age limit for change of legal sex has several parliamentary parties referred to an investigation by a team of experts will decide which route is best to go. We hope therefore that the politicians now look further into commission's proposals and make decisions along the lines presented in the report, or rather suggest that the age limit be eliminated entirely," said Gisela Janis, Chair of RFSL Youth in a press release.

RFSL and RFSL Youth also calls for a study on the feasibility of a "third legal sex" or to eventually completely eliminate legal gender.

Editor's comment: By comparison, in 2010 the Swedish government banned homeschooling for fear of having the bias of the parents pass down to the child. How gender reassignment surgery at the age of 12 (or younger!?) isn't child abuse, is just a remarkable feat of cognitive dissonance. As concerned as the Swedish government claim they are for the children, this is beyond any level of insanity. This is child abuse on so many levels. The inmates are running the asylum.

The article below from Metro explains further that they don't know what is causing the rise in gender dysphoria. Like it's some kind of mystery. The fact is that the science is clear on why this is happening. It's related to estrogen mimicking chemicals that upset the hormone balance, especially in the womb. Listen to Radio 3Fourteen with Claire Randall on The Biology of Gender Dysphoria. for further clarification

More and more children and young people seeking treatment for so-called gender dysphoria, the experience of being born to the wrong biological sex. The increase is evident in child and adolescent psychiatry at the Astrid Lindgren Children's Hospital, which is expected to bring in around 100 referrals of such cases this year, reports Swedish radio P4.

There is a threefold increase compared with 2013. The reason for the increase is unclear.

- It could be because there are people who have not previously been aware that this possibility exists. It could also be a lowering of the threshold on the basis of other factors in society, such that these phenomena are increasingly being observed and it becomes something that more young people choose to explore as part of their identity development, says Louise Frisén at the Astrid Lindgren Children's Hospital to P4 Stockholm.

Other countries have noted the same increase, according to Louise Frisén.