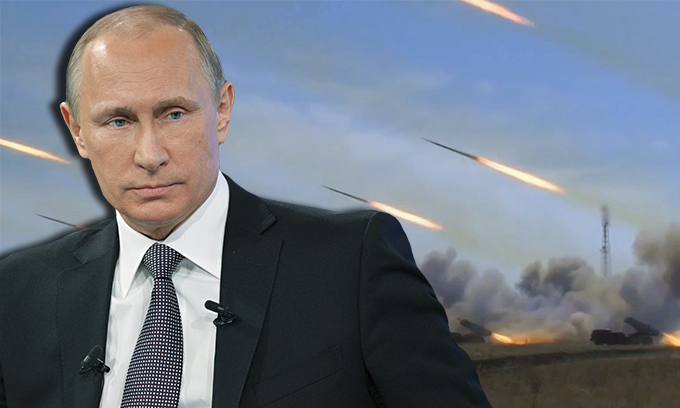 The risk that the multi-sided Syrian war could spark World War III continues as Turkey, Saudi Arabia and U.S. neocons seek an invasion that could kill Russian troops - and possibly escalate the Syrian crisis into a nuclear showdown, amazingly to protect Al Qaeda terrorists.

When President Barack Obama took questions from reporters on Tuesday, the one that needed to be asked – but wasn’t – was whether he had forbidden Turkey and Saudi Arabia to invade Syria, because on that question could hinge whether the ugly Syrian civil war could spin off into World War III and possibly a nuclear showdown.

If Turkey (with hundreds of thousands of troops massed near the Syrian border) and Saudi Arabia (with its sophisticated air force) follow through on threats and intervene militarily to save their rebel clients, who include Al Qaeda’s Nusra Front, from a powerful Russian-backed Syrian government offensive, then Russia will have to decide what to do to protect its 20,000 or so military personnel inside Syria.

A source close to Russian President Vladimir Putin told me that the Russians have warned Turkish President Recep Tayyip Erdogan that Moscow is prepared to use tactical nuclear weapons if necessary to save their troops in the face of a Turkish-Saudi onslaught. Since Turkey is a member of NATO, any such conflict could quickly escalate into a full-scale nuclear confrontation.

Given Erdogan’s megalomania or mental instability and the aggressiveness and inexperience of Saudi Prince Mohammad bin Salman (defense minister and son of King Salman), the only person who probably can stop a Turkish-Saudi invasion is President Obama. But I’m told that he has been unwilling to flatly prohibit such an intervention, though he has sought to calm Erdogan down and made clear that the U.S. military would not join the invasion.

So far, Erdogan has limited Turkey’s direct military attacks on Syria to cross-border shelling against U.S.-backed Kurdish forces that have seized territory from the Islamic State (also known as ISIS) in northern Syria. Turkey considers the Kurdish fighters, known as YPG, to be terrorists but the U.S. government sees them as valuable allies in the fight against Islamic State terrorists, an Al Qaeda spinoff that controls large swaths of Syria and Iraq.

But Erdogan’s short fuse may have grown shorter on Wednesday when a powerful car bomb killed at least 28 people in Turkey’s capital of Ankara. The bomb apparently targeted a military convoy and Turkish officials cast suspicion on Kurdish militants who also have been under assault from Turkish forces inside Turkey.

Though showing no evidence, Turkish officials suggested the attack may have been sponsored by Iran or Russia, another sign of how complicated the geopolitical morass in Syria has become. “Those who think they can steer our country away from our goals by using terrorist organizations will see that they have failed,” declared Erdogan, according to The Wall Street Journal.

(On Wednesday night, Turkey retaliated for the Ankara bombing by launching airstrikes against Kurdish targets in northern Iraq.)

The dilemma for Obama is that many traditional U.S. allies, such as Turkey, Saudi Arabia and Qatar, have been the principal backers and funders of Sunni terror groups inside Syria, including Al Qaeda’s Nusra Front and – to a lesser degree – the Islamic State. Now, the “allies” want the United States to risk a nuclear confrontation with Russia to, in effect, protect Al Qaeda.
Turkish Prime Minister Recep Tayyip Erdogan.

The twisted reality was acknowledged by no less an authority than Vice President Joe Biden during a talk at Harvard in 2014. Biden answered a student’s question by saying Turkey, Saudi Arabia and the United Arab Emirates had “poured hundreds of millions of dollars and tens, thousands of tons of weapons into anyone who would fight against [Syrian President Bashar al-] Assad.” The result, Biden said, was that “the people who were being supplied were Al Nusra and Al Qaeda and the extremist elements of jihadis coming from other parts of the world.”

The risks from these tangled alliances were also highlighted by a Defense Intelligence Agency report in August 2012, warning the Obama administration that the growing strength of Al Qaeda and other Sunni jihadists in Syria could lead to the creation of “an Islamic state” whose militants could move back into Iraq where the threat originated after the U.S. invasion of Iraq.

The DIA said Al Qaeda’s growing strength in Syria “creates the ideal atmosphere for AQI [Al Qaeda in Iraq] to return to its old pockets in Mosul and Ramadi and will provide a renewed momentum under the presumption of unifying the jihad among Sunni Iraq and Syria and the rest of the Sunnis in the Arab world against what it considers one enemy, the dissenters [i.e. the Shiites].

“ISI [Islamic State of Iraq, forerunner of ISIS, also known as the Islamic State] could also declare an Islamic state through its union with other terrorist organizations in Iraq and Syria, which will create grave danger in regards to unifying Iraq and the protection of its territory.”

Despite the prescient DIA report and Biden’s blunt admission (for which he quickly apologized), President Obama failed to put a stop to the strategy of supporting Assad’s opponents. He let Saudi Arabia, Qatar and Turkey continue funneling weapons to the most extreme elements of the rebellion. Meanwhile, the U.S. government insisted that it was only arming “moderate” rebels, but those groups were largely subsumed or controlled by Al Qaeda’s Nusra and/or ISIS, a hyper-violent spinoff from Al Qaeda.

In Syria, rather than cooperate with Russia and Iran in helping Assad’s military defeat the jihadists, the Obama administration has continued playing it cute, insisting – as Secretary of State John Kerry has said recently – that armed “legitimate opposition groups” exist separately from Al Qaeda’s Nusra Front.

In reality, however, the so-called “moderate” rebels around Aleppo and Idlib are Al Qaeda’s junior partners whose value to the cause is that they qualify for CIA weaponry that can then be passed on to Nusra as well as Nusra’s key ally Ahrar al-Sham and other jihadist fighters.