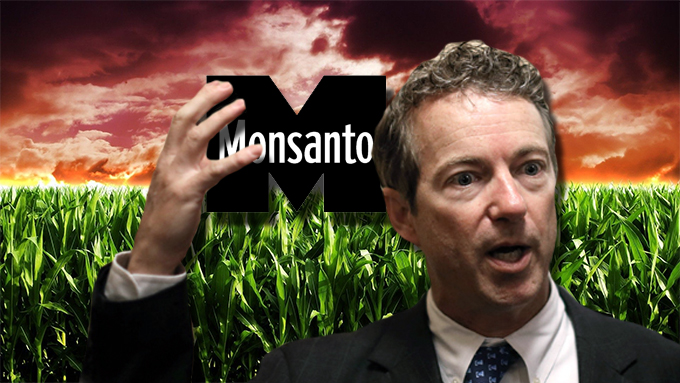 In a strange twist, Rand Paul has recently allied with Monsanto and has joined the ranks of academic shill Kevin Folta after coming out against GMO labeling, stating that the labeling requirements would push up the price of food for consumers — particularly poor ones.

To make matters worse, this year Rep. Mike Pompeo (from Kansas) proposed a bill that would block states' citizens from democratically mandating GMO labeling. (Pompeo is also the single largest recipient of campaign funds from the Koch Brothers.) This bill, also known as the DARK (Deny Americans the Right to Know) Act, would effectively block Vermont and other states from being able to vote on or enforce GMO labeling, making it impossible for them to protect their consumers. Pompeo's bill would instead set up a "voluntary labeling program" that companies could either opt in or opt out of; however, with Big Food's near monopoly, this approach amounts to little more than wishful thinking.

Too, taking away states' rights constitutes the worst type of government overreach. With that in mind, it seems odd that a self-proclaimed libertarian like Rand Paul would say that "he has not yet decided how he will vote on the Pompeo bill," as reported by Agri-Pulse.com.

Rand Paul's excuse for coming out against GMO-labeling falls flat. He is spreading a misconception by saying that requiring GMO labeling would drive up food costs, since most estimates show that GMO labels may cost consumers only $2.30 per person per year, assuming that these costs would be passed on to consumers at all, despite the fact that food corporations routinely change their product labels anyway. Why then does Cornell Professor William Lesser claim that GMO labels would cost each American family of four an average of $500 a year? Hmm... Is it because he was funded by the Council for Biotechnology Information, an industry front group that is dedicated to promoting the use of biotech and GMOs in agriculture? Could it be that industry money influenced Lesser's conclusions?

Meanwhile, it sounds as though Rand Paul is getting his "facts" straight from the mouth of Monsanto. Consumers Union reported that the costs reported for GMO labeling are wildly overestimated:

The Lesser study was funded by the Council of Biotechnology Information and is their intellectual property. The Council consists of major biotechnology companies Monsanto, DuPont, Syngenta, BASF, Bayer, and Dow, which are all in opposition to A3525 and have actively lobbied against labeling bills across the country.

Consumers Union found that this industry-funded study is based on faulty assumptions and that A3525 will not lead to any appreciable increase in the price of food bought by consumers.

Why then would Rand Paul say, "The labeling requirements are enormously expensive and just add to the cost of foods. Somebody who is poor can't buy as much food because of requiring labels to be stuck on things."

Is it because Rand Paul has been in the pockets of Monsanto all along? In 2012, Paul voted against a GMO labeling amendment, put forth by Bernie Sanders, that would "permit States to require that any food, beverage, or other edible product offered for sale have a label on indicating that the food, beverage, or other edible product contains a genetically engineered ingredient." In response to a question about why he voted down the GMO labeling amendment, Paul said, "So while there is evidence we should be concerned about GMOs, we should also be careful not to lose our constitutional perspective simply because the end result is one we may desire."

If Rand Paul were that concerned about the Constitution, then he would presumably come out loud and clear against the DARK Act, which would limit states' rights to pass laws on whether or not they want GMO labeling. The People of Vermont have already decided that they are for GMO labeling, and the DARK Act would prevent them from moving forward. Rand Paul's persistent waffling on this issue is clearly in contradiction of his reported views on states' rights.

Check out GMOFood.news to stay up to date on breaking news regarding the unlabeled GMOs in food.

As Natural News Editor Mike Adams pointed out in 2013, the problem with believing that a free market, voluntary labeling program will create a level playing field for food companies is "magical thinking" when much of the country's food supply is an oligopoly controlled by only a handful of corporations:

And here's where I slightly disagree with the libertarians: the free market alone cannot solve this problem. Corporations will NEVER disclose such things unless they are forced to. Some libertarians will argue that consumer pressure alone can force companies to engage in things like GMO labeling, yet experience tells us this is simply not so. When the food industry is so completely dominated by only a handful of companies, consumers have no real alternatives through which to apply market choice forces.

Rand Paul has pathetically fallen for Monsanto's anti-labeling excuse, which claims that labeling is just too expensive to implement. If that's such a problem, then why require any labeling at all, since ALL labeling costs money? If labeling hurts the poor, then let's get rid of the Nutrition Facts label while we are at it. All those facts are useless anyway, when you're eating GMOs.

In the end, the health costs of consuming GMO foods will outweigh the costs of food labeling, regardless of how inflated they may be. But if cost were really Rand Paul's concern, he would realize that eating GMOs will make people sick in the end. Perhaps his head is too clouded from GMO brain fog.

To learn the truth about the dangers of GMO foods, watch the documentary Seeds of Death, or find new articles on GMOs at GMO.news.