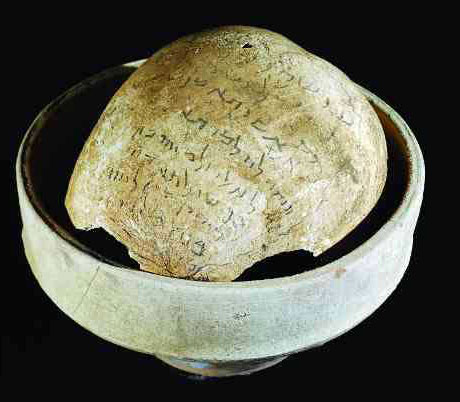 Only five skulls inscribed with Jewish Aramaic magic incantation texts have come to light, none from professional excavations. Like the others before it, this skull, acquired by collector Shlomo Moussaieff, raises more questions than it answers. Its relationship to the more common genre of incantation bowls and its use in a rite of magic seem clear enough. But until more information emerges, basic questions—how this skull was used, for whom, by whom and for what reason—remain unanswered.

Not long ago, the well-known collector Shlomo Moussaieff acquired two earthenware bowls, the open ends of which were adjoined to form a kind of case—inside the case was an ancient human skull. A magic incantation, written in Aramaic, was inscribed on the skull.

BAR readers already know about the more than two thousand magic incantation bowls that have survived from third–seventh-century C.E. Jewish communities in Babylonia.

The incantation bowls were made at the same time and in the very communities that produced the most intricate, complex and revered accomplishment of rabbinic Judaism, the Babylonian Talmud. Although some have deemed the incantation literature to be inconsistent with the spirit of the Talmud, recent research has shown it to be, rather, complementary and representative of aspects of life reflected within the Talmud. 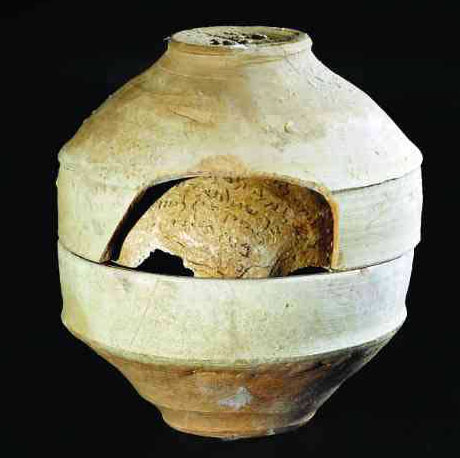 The Moussaieff incantation skull arrived in two earthenware bowls that form a container. The bowls themselves are not inscribed. It appears that the skull and bowls constituted a single ritual object, with the inscribed skull as the magical focal point.

The fact remains that belief in demons was widespread at this time among Jews as well as other peoples. Incantation bowls are known not only from Jewish communities but from other communities as well. The Jewish versions are written in what is commonly known as Jewish Aramaic.

To combat demons—who cause medical problems as well as other mishaps and ills—people invoked numerous magic rites and formulae. The magic rites could also serve as a love charm. Your desired one would surely fall in love with you if the proper incantation was invoked. The reverse was also true. To bring disaster on your personal enemy, you would invoke a curse text. These often-strange and mystifying incantations were usually inscribed in cramped writing in a spiral on the interior of the bowls.

Not all magic incantation texts were written on bowls. Sometimes they were written on parchment, tin, lead, copper, silver and even gold. Occasionally we find one on even more exotic materials such as eggs. Now from the Moussaieff collection comes one written on a skull.

It appears that only four other skulls with incantation texts have come to light—and a dim light at that.

None of them was excavated professionally. All simply surfaced on the antiquities market. 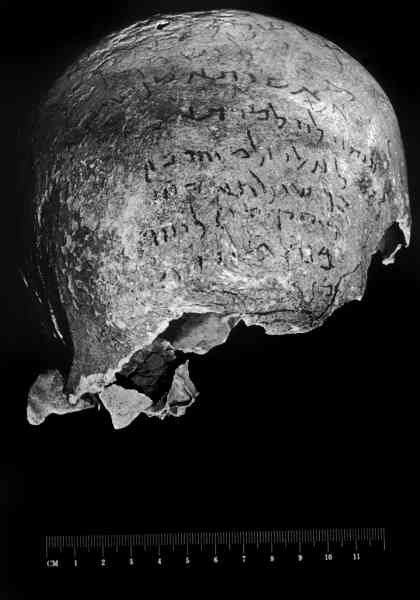 “BY MEANS OF A SKULL.” It is difficult to write on the idiosyncratic surface of a skull; reading a skull inscription can be equally difficult. Like the inscriptions on incantation bowls, the skull text is surrounded by a squiggly line. Although the inscription on the Moussaieff skull is very hard to decipher, one thing is clear: It contains names of people for whom the incantation was made. One of the names, Shilta, is derived from an Aramaic word meaning “after-birth.” The skull itself was probably that of a woman. The exact manner in which this skull was used, however, remains a mystery. A contemporaneous source, the Babylonian Talmud, Tractate Sanhedrin 65b, offers a possible clue: “There are two kinds of necromancy: the one where the dead is raised by naming him, the other where he is invoked by means of a skull.”

And all but the Moussaieff skull have been known since the early 20th century. The great Aramaic scholar James A. Montgomery of the University of Pennsylvania studied one in the university’s museum collection, about which he wrote in 1913.

When he examined it, the entire skull was there and well preserved, although in a shattered state. Montgomery reported two inscriptions on the skull. Unfortunately, the text was not very clear, and he managed only a few comments on the text. Even more unfortunate, the skull does not appear to have been well cared for since Montgomery’s time. Among the 17 remaining skull pieces I examined in Philadelphia—which were poorly mounted on a precarious wire structure with what appears to be something like epoxy glue—I found only what appears to be part of the shorter inscription. It is painfully clear that there is much less of the object at the present than there was when Montgomery examined it. And what is left of the skull appears to be in poor condition.

Montgomery’s comments on what he could salvage of the Philadelphia skull text indicate that it referred to “spirits” and “Liliths,” in the plural. In this period, high infant and birthing-mother mortality rates were attributed to Lilith demons, who were thought to roam the earth looking for pregnant women and newborn infants to attack. Lilith, of course, emerges later, in the medieval period, as the mythological first wife of Adam who refused to be subservient to him. But the motif of the demoness who roams the earth looking for newborn infants to devour has its roots in much-earlier Mesopotamian traditions and persists throughout history.

In addition to the Philadelphia skull, Montgomery mentioned two other skulls in the Berlin Museum that he was not able to examine. I noticed an additional skull at the Berlin Museum—so there are actually three, not two, specimens there. The texts on two of the three are extremely fragmentary. One fragmentary text, however, records the name of the powerful and sinister demon Yaror, the so-called “demon of dispatch” known from other incantation texts. This skull also contains a drawing of a bound demon, not dissimilar to the figures occasionally found in the incantation bowls. Perhaps this is Yaror himself.

One of the Berlin Museum skulls, however, bears a more extensive text. Parts of 16 lines have survived. The text mentions the son and grandson of Lilith, seven angels and Gabriel. One part of the text that is difficult to interpret mentions someone who “eats and is not filled … [who] drinks and is not intoxicated … [and who] is injured and not released [meaning uncertain].” This could refer to an insatiable demon (the grandson of Lilith), or it might be a description of either the client’s complaint or a description of what this incantation is meant to inflict on his enemy. The rareness of this type of text and the difficulty of reading it mean that we will have to wait for the appearance of more material to ascertain which of these possibilities is the more likely. 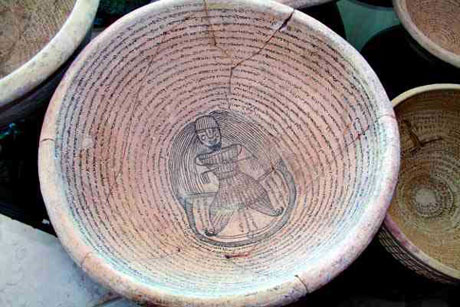 ANGELS AND DEMONS. Like their neighbors, Babylonian Jews invoked magic formulae to combat demons (often associated with illness), impose curses against human foes or charm potential mates. Generally written in Jewish Aramaic, incantations were inscribed on anything from parchment to eggshells, tin, lead, copper, silver and gold. More than two thousand magic incantation bowls from the third to seventh centuries C.E. survive. Although it is not entirely clear how they functioned, many bowls share certain features: an inscription that spirals out from the bowl’s interior and, in some cases, a drawing of a figure may represent the intended target. Recent scholarship has suggested that folk religion reflected in these magic rites often complements the more-austere traditions mentioned in the contemporaneous Babylonian Talmud. The bowls pictured here are from the Moussaieff collection. 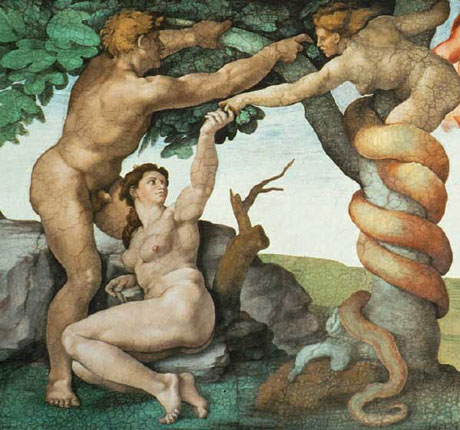 LILITH. In early Mesopotamian traditions, Lilith demons were thought to roam the earth, attacking birthing mothers and their infants. Later, in the medieval period, Lilith is identified as the rebellious first wife of Adam as the serpent in Michelangelo’s painting of the Temptation on the Sistine Chapel ceiling. Two of the five known Aramaic incantation skulls make reference to Lilith: A skull at the University of Pennsylvania refers to “Liliths” in the plural and a skull at the Berlin Museum mentions the son and grandsons of the demoness.

It is not easy to write on a skull. The texture of the surface, its curves, bumps and holes, requires scribal adjustments that affect the flow of the text and make reading it more difficult. This is certainly true of the recently surfaced example from the Moussaieff collection.

This skull came to Moussaieff inside two bowls that formed a case. The bowls themselves contain no writing. An examination of the bowls gave me the impression that they were an original and integral part of a single magical object of which the skull was the main part. This is, however, speculative. 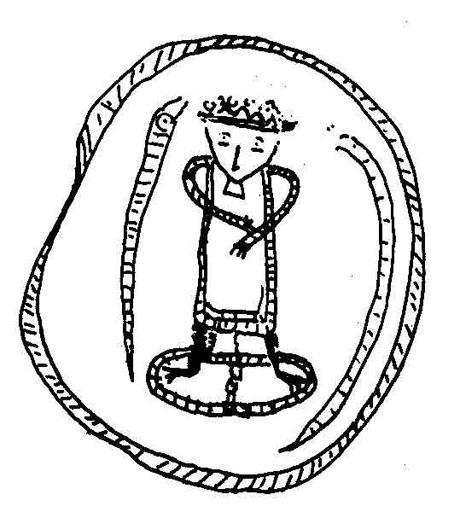 The drawing of a de-feminized image of Lilith circumscribed inside of a serpent comes from an incantation bowl, which describes a person inhabited by the evil spirit herself.

The inscription on the skull contains many of the features common to magic bowl inscriptions. We know the names of at least some of the people for whom the skull incantation was made. Two of them are common Jewish names: Martha and Shilta. According to one scholar, Shilta is derived from an Aramaic word meaning “after-birth.” And the skull is probably that of a woman. Although parts of 11 lines of text have survived, it is difficult to make much sense of what remains. The text is surrounded by a squiggly line, a common element among incantation bowls.

The text, however, is only part of the mystery. Basic questions continue to baffle: Why a skull? I have no certain answer. That so few examples exist, in comparison to the large number of bowls, suggests that the use of skulls for incantation texts was rare. Judaism, of course, has many taboos regarding human remains. Even touching a corpse imparts impurity. Necromancy is forbidden (although it was obviously sometimes practiced). Perhaps the skull was used for this text because it was thought that the spirits of the dead, to which skulls are obviously connected, have access to the supernatural realm.

In the end, this skull and its text remain mysterious, unfortunately revealing less than they conceal.