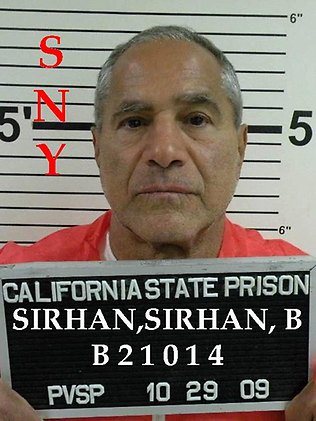 Recent legal filings on behalf of Sirhan Sirhan, jailed 45 years ago in the death of Robert F. Kennedy, reveal new evidence suggestive of a larger conspiracy. The filings also enumerate examples of obstructive tactics by a government representative—contortions reminiscent of the Warren Commission’s incredible, acrobatic magic bullet that was essential in creating consensus for a lone wolf assassin in the death of RFK’s elder brother, John. (If you’d like to read those filings, we’ve posted them here and here.)
Another “Patsy”?
Sirhan, the man almost everyone believes killed Robert F. Kennedy (and did so alone), is seeking a new trial. Sirhan’s current attorney, William Pepper, who also served as James Earl Ray’s final lawyer and believed that Ray had been set up, is seeking to convince the US District Court for the Central District of California not to accept a report from a magistrate judge, Andrew J. Wistrich, advising that the new trial request be dismissed. It’s up to the district court to decide whether to proceed.

Although Sirhan pled guilty at his original trial in 1969, Pepper contends that Sirhan was betrayed by a lead member of his original legal team, Grant Cooper, who Pepper notes was himself under federal indictment at the time for illegally possessing grand jury proceedings in another famous case, involving card cheating at the Beverly Hills Friar’s Club. Cooper, who faced possible jail time for that, ended up being let off with a $1000 fine. Intriguingly, his client in the Friar’s affair, John Roselli, was an organized crime figure with CIA ties often named as a possible conspirator in the death of President John F. Kennedy.

The defense had Sirhan admit guilt and sought to portray him as both mentally deficient and acting on impulse. Pepper notes that the attorney’s personal vulnerability was known to the judge and prosecution, and that they nevertheless said nothing while Sirhan’s real interests were not represented, and exculpatory evidence was suppressed.  Although Sirhan confessed to shooting at Robert Kennedy, he later said that he could remember nothing at all of that tragic day.

Now, Pepper is requesting a chance to come to court and offer two kinds of evidence – facts known at the time but not presented to Sirhan’s jury, and facts that have come to light since the trial. The fundamental claim is that Sirhan was genuinely unaware of his actions on June 5, 1968 —when he did, in fact, bring a gun to the pantry of the Ambassador Hotel in Los Angeles and shortly after midnight fire at Kennedy from the front. Pepper wants to introduce expert testimony that Sirhan was a guinea pig in a super-secret program to hypnotize people and turn them into unwitting killers. As crazy as this may sound at first blush, the United States government is on record as admitting to research in broad areas of mind control, particularly with regard to the CIA’s MKULTRA program, which among other things wanted to determine whether people could be made into killing machines. (For more on MKULTRA historically, see this, and more recently, including threats to Obama’s safety, see this.)

The Sirhan case was always, on the surface at least, open-and-shut. As if being apprehended with a gun at the scene wasn’t enough, police found Sirhan’s highly incriminating diaries, replete with declarations that RFK should die.

But some wondered whether he wasn’t too textbook-perfect a culprit.

Indeed, the cumulative evidence that has come out over the years suggests that things were far more complicated. Witnesses saw Sirhan with a woman in a polka-dotted dress; she was seen fleeing the scene, and heard to brag about having participated in the Kennedy hit. A man also was seen fleeing, gun in hand. And of course there was all that evidence that Sirhan could not have fired the fatal shots.

The clincher was Sirhan’s amnesia. What could that be about? As for Sirhan’s ranting in several spiral notebooks, some experts came to wonder if he had produced them while in a hypnotic state. In 1969, in the presence of several experts/witnesses, Sirhan, under hypnosis, engaged in “automatic writing.” After he was awakened, he remembered none of it.

This leads us to the recent work of Daniel Brown, a Harvard psychologist. Based on having spent more than 70 hours interviewing Sirhan at Pleasant Valley State Prison in California, Dr. Brown has concluded that, for some time prior to the events at the Ambassador Hotel, Sirhan had been hypnotized—and not just hypnotized but “hypno-programmed”.

Read the full article at: whowhatwhy.com