Dec 10, 2013 Source: rt.com
Rice from fields in the Fukushima prefecture, evacuated after the worst nuclear disaster in Japan, will be served to government officials for 9 days in a bid to demonstrate the safety of the country’s most-beloved crop, a local broadcaster reported. 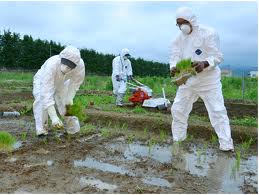 The rice cultivated in several decontaminated fields in the Yamakiya District in Kawamata Town and Iitate Village, two areas designated as evacuation zones after the March 2011 nuclear catastrophe, will be served in a government office in Tokyo from Monday.

Over half a ton (540 kilograms) of rice will be part of a test to prove the effectiveness of the decontamination process. Officials from the Fukushima prefecture have given assurances that the rice contains no radioactive substances.

A farmer from Kawamata Town told NHK that he will continue to cultivate the rice now that he knows it tastes good. Because the zone was evacuated after the nuclear crisis, he said that he had traveled from his temporary home to the paddy fields to tend the crops.

Some 160,000 people escaped the vicinity of the Fukushima Daiichi nuclear plant after an earthquake in March 2011 triggered a tsunami that hit Japan’s coast, damaging the plant’s three nuclear reactors. The catastrophe that hit Fukushima became the world’s worst nuclear disaster since Chernobyl.

AND: Japanese MP drinks Fukushima water under pressure from journalists