In an act condemned by candidates of both major political parties, unknown arsonists bombed the Orange County RNC headquarters in Hillsborough, North Carolina. Anti-Republican graffiti was found sprayed nearby.

Hillary Clinton and Donald Trump had a rare moment of agreement on Sunday as both took to Twitter to condemn an attack on the Orange County Republican Party headquarters in Hillsborough, N.C.

The night before, someone had thrown a bottle filled with flammable liquid through the windows of the office and spray-painted an anti-GOP message referring to "Nazi Republicans," authorities said on Sunday. The damage – which consisted of char-covered walls, a couch burned down to its springs, a floor covered in shattered glass, and melted campaign signs – was discovered the next morning by another business owner. On a building nearby, someone had spray-painted the words: "Nazi Republicans leave town or else." 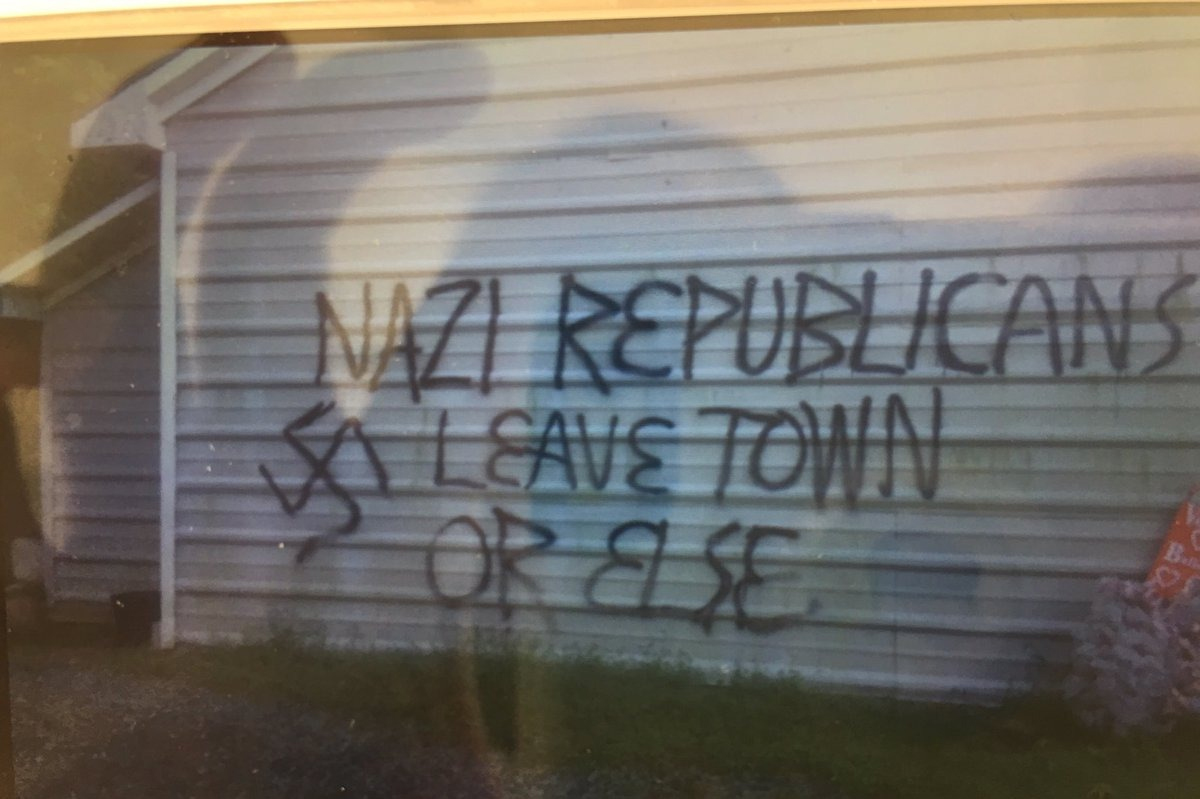 The incident, occurring less than a month before the 2016 presidential election, is the latest example of extreme political polarization in an election season characterized by divisive rhetoric and campaign rallies turned violent. Partisan polarization and animosity towards members of the other party are the highest they've been in nearly a quarter of a century, according to the Pew Research Center.

In Orange County, N.C., an area that includes much of Chapel Hill and the University of North Carolina campus, registered Democrats outnumber Republicans three to one.

"I'd like to believe we aspire to respect hearing differing views," Hillsborough mayor Tom Stevens told the Associated Press. "This is very troubling."

No one was injured by the attack, as no one was in the office at the time. But State GOP executive director Dallas Woodhouse said that people often work after hours, taking breaks to nap on an office couch. He called the fire "political terrorism," and said it was a "miracle that nobody was killed."

Politicians from both parties, including Republican nominee Donald Trump and Democratic nominee Hillary Clinton, were quick to condemn the act on social media.

"The attack on the Orange County HQ @NCGOP office is horrific and unacceptable," Mrs. Clinton wrote on Twitter. "Very grateful that everyone is safe."

Mr. Trump expressed similar disapproval of the attack but blamed it on Clinton and other Democrats, writing,

He added in another tweet directed at local Republicans: "With you all the way, will never forget. Now we have to win. Proud of you all!"

Gov. Pat McCrory, a Republican, shared photos of the damage on Twitter, calling the fire "clearly an attack on our democracy."

While the firebombing could easily have served to further divide Republicans and Democrats in North Carolina, there have been some signs of solidarity in its aftermath. Democrat David Weinberger, a research fellow at the Berkman Center for Internet and Society at Harvard Law School, quickly launched a GoFundMe campaign for those wishing to contribute money to the Orange County Republicans' efforts to re-open their office. The page reads:

As Democrats, we are starting this campaign to enable the Orange County, North Carolina Republican office to re-open as soon as possible. Until an investigation is undertaken, we cannot know who did this or why. No matter the result, this is not how Americans resolve their differences. We talk, we argue, sometimes we march, and most of all we vote. We do not resort to violence by individuals or by mobs. So, let's all pitch in, no matter what your party affiliation, in and get that office open again quickly.