Rome's She-Wolf Younger Than Its City 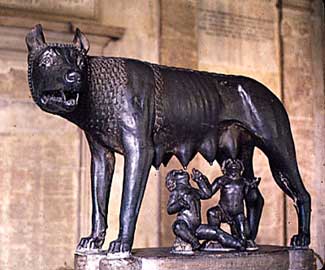 The icon of Rome's foundation, the Capitoline she-wolf, was crafted in the Middle Ages, not the Antiquities, according to a research into the statue’s bronze-casting technique.

The discovery quashes the long-prevailing belief that the she-wolf was adopted as an icon by the earliest Romans as a symbol for their city.

Recalling the story of a she-wolf which fed Romulus, the legendary founder of Rome, and his twin brother, Remus, after they had been thrown in a basket into the Tiber River, the statue has been always linked to the ancient world.

It was believed that the Romans later adopted the wolf since her defiant stance and raised eyebrows seemed to reflect Rome’s liberation from the Etruscan rule.

On the contrary, scholars have long established that the bronze figures of Romulus and Remus were added in the Renaissance, in accordance to the legend of Rome’s foundation.

"Now incontestable proofs tell us that also the she-wolf is not a product of the Antiquities," Adriano La Regina, former Rome’s archaeological superintendent and professor of Etruscology at Rome's La Sapienza University, wrote in Italy’s daily "La Repubblica."

According to La Regina, analysis carried out by restorer Anna Maria Carruba during the 1997 restoration of the bronze statue showed that the she-wolf was cast as a single unit. This technique was typically used in the Middle Ages.

"Ancient bronzes differentiate from those made in the Middle Ages because they were cast in separate parts, and then brazed together," La Regina said

First used by the Greeks and then adopted by Etruscan and Roman artists, the technique basically consisted of brazing the separate joints using bronze as welding material.

The new dating of the Capitoline she-wolf was not revealed at the presentation of the restored statue in 2000. The Capitoline Museum, where the bronze is displayed, claims the artwork traces back to 480-470 B.C.

"Analysis and findings from the restoration were ignored," wrote La Regina.

Indeed, it might have not been easy for the Romans to accept that the archetypal symbol of Rome was cast in the relatively recent Middle Ages.

The she-wolf was one of the favored images of Benito Mussolini, the fascist dictator, who considered himself the founder of the New Rome. He sent various copies of the bronze to American cities.

The Capitoline she-wolf was also used in the poster of the 1960 Rome Olympics and is one of the most popular items among souvenir sellers in Rome.

Gregory Warden, a professor of art history at Southern Methodist University who specializes in Etruscan bronzes, found the suggestion that the she-wolf may be medieval "intriguing." But, he does not consider the matter closed.

"While the statue is singular, and thus difficult to compare to other Etruscan statuary, I do not think that the technical argument is fully persuasive, since we have so little comparative evidence for large-scale bronze casting in the Etruscan world," he said. "We certainly cannot assume that Etruscan bronze-casting techniques would always have been identical to those of the Greeks."