Russia, US at Odds Over Future Asteroid Hit 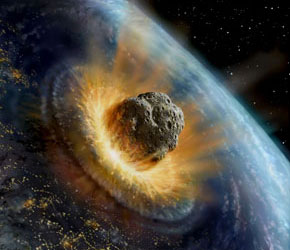 The threat of an asteroid crashing into Earth has captivated the imaginations of movie audiences for years. Now, however, Russia is working to develop a very real plan to counter such a threat.

The Russian space agency says it is working to prevent a large asteroid from colliding with Earth. Voice of Russia radio reported the agency's head, Anatoly Perminov, made the announcement Wednesday.

Without giving many details, Perminov said his agency is working on a way to divert the path of the asteroid, named Apophis, without destroying it.

Voice of Russia says he invited scientists and experts from U.S. Space Agency NASA, the European and Chinese space agencies to join the project.

NASA research scientist Dr. Paul Chodas specializes in the study of near-Earth objects, or asteroids that may one day threaten civilization.

He says that while there are hazardous asteroids in our universe, NASA's latest calculations put Apophis at having only a one in 250,000 chance of hitting Earth by, or during, the 2030s as Perminov predicted.

He says that with more research, he expects the probability of the collision to drop to zero. However, he says that other asteroids, including those that have not yet been discovered, could pose more of a risk and call for more research.

"The odds are very small that we will have a huge collision with the Earth, but it's certainly worth keeping an eye on these objects and ensuring that one is not going to hit any time soon. If one is headed for the Earth, then we feel, if we have enough warning time, we have the technology to divert the object. And that's what this proposal to develop this technology is all about," he said.

Chodas also noted that an asteroid hitting Earth would affect people from all parts of the globe, and praised Russia for suggesting international collaboration on how to avoid such a collision.


"(99942) Apophis (previously known by its provisional designation 2004 MN4) is a near-Earth asteroid that caused a brief period of concern in December 2004 because initial observations indicated a relatively large probability that it would strike the Earth in 2029. Additional observations provided improved predictions that eliminated the possibility of an impact on Earth or the Moon in 2029. However there remained a possibility that during the 2029 close encounter with Earth, Apophis would pass through a "gravitational keyhole", a precise region in space no more than about 400 meters across, that would set up a future impact on April 13, 2036. This possibility kept the asteroid at Level 1 on the Torino impact hazard scale until August 2006.

Additional observations of the trajectory of Apophis revealed the "keyhole" would likely be missed and on August 5, 2006, Apophis was lowered to a Level 0 on the Torino Scale. As of October 19, 2006 the impact probability for April 13, 2036 is estimated at 1 in 45,000. An additional impact date in 2037 has been identified, however the impact probability for that encounter is 1 in 12.3 million.

Despite the fact that there is no longer any significant probability of an Earth impact, the Planetary Society is offering a $50,000 prize for the best plan to put a tracking device on or near the asteroid."