Oct 1, 2012 Source: spiegel.de
Disposing of the Costa Concordia, which ran aground off the coast of Tuscany in January 2012, will be the most spectacular salvage operation in the history of seafaring. The pressure on the team is huge: If anything goes wrong, the ship’s operator will have another disaster on its hands.

Withered potted palms hang upside down over the rusty railing. Chairs lie scattered across the deck and devastated banquet tables can still be recognized under glass roofs. Viewed up close, from one of the coast guard’s inflatable boats, the cruise ship Costa Concordia resembles a city that has been hastily evacuated. 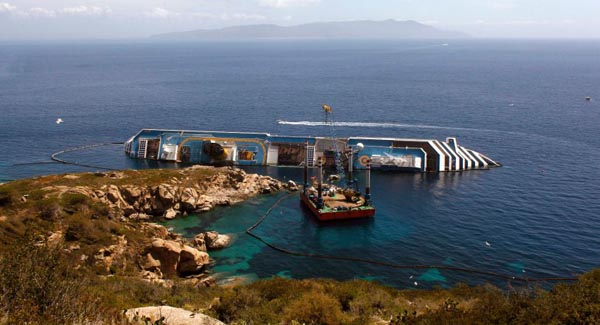 The clock over the children’s pool stopped at 11:30 p.m. on Jan. 14, the night that the ship ran aground. By that time, captain Francesco Schettino had long since abandoned ship, but passengers and crew were still fighting for their lives.

Nicholas Sloane, 51, a red-haired, freckled South African with hands like bear paws, is steering the rubber boat around the wreck. Before him looms the gaping gash in the large hull, many meters long, where part of the rock that caused the shipwreck was still embedded until recently. Above him, workers are hovering in a steel cage suspended from the swivel arm of a floating crane. He jokingly shouts to welders who are hanging against the sloping wall of the bow like mountain climbers.

Sloane is the senior salvage master for the Costa Concordia. He studied nautical science, and with his master’s certificate he could command a luxury ocean liner like the Queen Mary 2 or a supertanker, but that kind of career has never interested him. Sloane doesn’t steer ships -- he gets rid of them. For the past three decades, he has been working as a clean-up man on the world’s oceans, raising sunken oil rigs and cutting up ships underwater. But his job on Giglio Island is to return the wreck to an upright position and tow it to a mainland harbor -- in the best possible condition and ideally still in one piece. 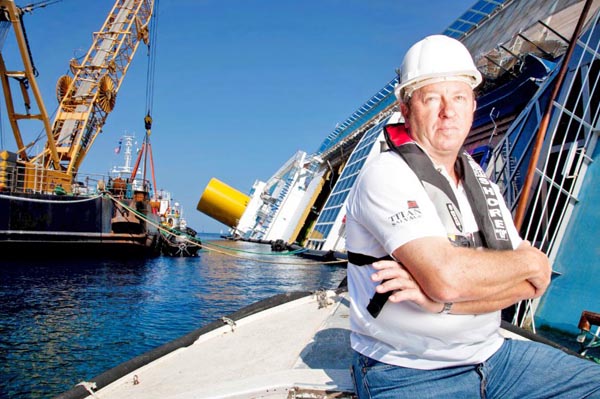 Nicholas Sloane is the senior salvage master for the Costa Concordia. His job is to return the wreck to an upright position and tow it to a mainland harbor -- in the best possible condition and ideally still in one piece.

Then the TV camera crews will produce new images that his employers hope will overshadow the old ones that have been indelibly etched in our minds: the images of people desperately clambering down ropes on the side of the ship to reach the lifeboats. Thirty-two people died that night, including 12 Germans.

The phone call from Florida-based company Titan Salvage reached Sloane while he was removing a freighter from a reef in New Zealand. He had never heard of Giglio, the so-called enchanted lily island, located between Elba, Montecristo and the coast of Tuscany. He thought of Italian red wine, pinot noir, which he highly appreciates. He called his wife and asked her if she wanted to meet up in "good old Europe." Forget it, his wife said. She had seen the horrific images from Giglio on TV. A few weeks ago, though, she changed her mind and visited him with their three children.

Sloane speaks tenderly and lewdly about the ship, like an old sea dog referring to his lover. He describes how he intends to bed her on a cement mattress -- how he plans to dress her in nappies, attaching floating pontoons to her flanks. His work uniform, a white polo shirt, is emblazoned with the mission’s motto: "Determination & Love."

Sloan is acting on behalf of Costa Crociere, the Italian shipping company that owns the Costa Concordia. He currently commands some 100 engineers, 24 divers and roughly 100 additional specialists. If the salvage operation is a success, he says with a grin, he will stand triumphantly on the upper deck next to the pool. The plan is for the Costa Concordia to float again in the spring, albeit only for a brief final voyage -- and a great deal can happen in the meantime.

On the island of Giglio, they are currently preparing the most spectacular shipwreck towing maneuver in maritime history. Never before has such a colossal cruise ship been raised to an upright position. The vessel is 290 meters (951 feet) long and 36 meters (118 feet) wide. It has a displacement of 50,000 metric tons. To make matters worse, it’s lying in a precarious position on a rocky slope and is in danger of sliding into deeper water. The salvage is expected to cost at least €300 million ($387 million) and will set new technical and environmental standards.

Indeed, the idea is to give a clean image to a tainted industry, to make a grand gesture after the grand fiasco. It’s also hoped that, if the pleasure vessel can be salvaged in an exemplary fashion, it will send a strong signal to those who criticize the trend in the industry to build ever more enormous cruise ships. For Costa Crociere, the future is at stake; the shipping company has to win back trust. As part of its bid to do so, the company took a SPIEGEL team to view the wreck and presented details of its work for the first time.

A hotel in the harbor of Giglio serves as an organizational hub for the salvage crews. The windows of the "salvage room" on the ground floor are covered with blue curtains. Fans whir in the background. Young men wearing caps and rugged boots sit at laptops and chase away anyone who has no business being here.

Before the salvage operation can begin, a lot of purely mathematical work is required. Hundreds of files have been sent back and forth between Giglio and the Hamburg-based marine engineering company Overdick. The work involves complex calculation models to determine whether the ship has the structural strength to be rolled upwards. At the moment, the plan appears feasible and the hull should be able to withstand the lifting forces. But what happens if the critical area along the edge where the ship is rotated breaks apart? No one can say with absolute certainty that it will work -- and there is no plan B.

In early May, four months after the ship ran aground, a technical committee comprised of representatives of the shipping company, shipbuilding companies and additional experts awarded the contract to Titan Salvage and Micoperi, a company based in Ravenna, Italy that specializes in underwater constructions such as oil platforms. Six other companies had also bid on the project, including specialists working for Smit from Rotterdam, who until just a few weeks ago had been pumping the heavy fuel out of the wreck. The Dutch were so popular that Giglio residents performed a Mexican wave for them down at the harbor. Smit was also the company that achieved the feat in 2003 of cutting apart a sunken car freighter in the English Channel and removing it piece by piece.

The committee decided against cutting apart the Costa Concordia, and instead opted for the most expensive proposal -- the plan to bring the capsized ship to an upright position. To achieve this, they will use a kind of rolling maneuver called the parbuckling principle (see graphics gallery). For the experiment, 33-meter high watertight steel boxes, or caissons, will be attached to the sides of the ship and used as floats. From an underwater platform deeply anchored in the bedrock, 36 steel cables, each as thick as a lamppost, will extend to the upper edge of the caissons. These cables will be used to almost silently rotate the ship out of its tilted position. It will have taken one year to painstakingly prepare the maneuver, but it will require less than two hours to perform it -- if all goes well.

It has already become clear that the salvage operation with Titan Salvage and Micoperi has set the stage for the clash of two very different corporate cultures: One is a team of daredevil problem solvers who rope down from helicopters to the decks of stricken tankers and lasso abandoned ships on the high seas as if they were wild horses. The other is a group of designer engineers who work meticulously according to official guidelines, where each step is coordinated with the coast guard, the Environment Ministry, the region of Tuscany or the mayor of Giglio. In situations like this, Italy’s bureaucrats can be very fussy. On numerous occasions, Micoperi engineers have urged their colleagues from Titan Salvage to show more respect for rules and regulations: "We are not in Bangladesh."

Captain Sloane often works in countries like Bangladesh. But he says this is the type of first-class salvage that only the industrialized world can afford.

There are certainly cheaper ways of dealing with wrecks. The most cost-effective solution is simply to leave it where it is. Blowing it up with dynamite is another solution. Sloane is an expert at doing that. He opens a folder on his laptop that he named "Blow Jobs" and shows films of stranded ships that collapse like high-rise buildings. "Blow jobs are always an option," says Sloane with a grin, "but not for Giglio."

The wreck is like a surprise package, he says, adding that you never know how much detergent and cosmetics, not to mention sheets and carpets, such an explosion would toss into the sea. And, of course, a demolition would show a lack of respect for the two corpses that are still presumed to lie within the ship’s hold -- the bodies of a Sicilian passenger and a waiter from India.

Read the full article at: spiegel.de

Salvage Operation to Bring the Capsized Costa Concordia (May 2012)