Jun 5, 2014 Source: unknowncountry.com
When most people think of genetically modified organisms, or GMOs, pictures of pest-hardy soya beans spring to mind, yet the true implications of this term are not widely considered.

Though the consumption of GMOs is a subject for debate in itself, there are other, less obvious areas in which other forms of genetic engineering could have - and are having - dramatic effects on our daily lives. In truth, under the umbrella of the term "genetic engineering," scientists have been given almost free rein to pursue a host of wild and weird endeavors that have resulted in some extremely questionable results. 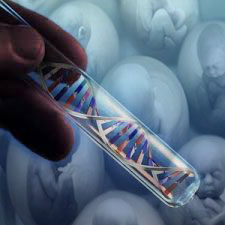 Astonishingly, genetic engineering is a practically unregulated area of science, at least in terms of ethics. Any regulations that are currently in place primarily assess food health risks rather than ethical considerations and, consequently, chimeras, clones and human-animal hybrids and other such freakish combinations have been created over the years in the interests of science.

"Genetic engineering involves producing and introducing a piece of DNA (the rDNA construct) into an organism so new or changed traits can be given to that organism. The rDNA construct can either come from another existing organism, or be synthesized in a laboratory. Although conventional breeding methods have been used for a long time to select for desirable traits in animals, genetic engineering is a much more targeted and powerful method of actually introducing specific desirable traits into animals."

So, apparently it is ethical to pervert nature and spawn designer animals with specific traits to order, but what are the future implications of this?

If the practice of genetically engineering animals was restricted to the production of cows with higher milk yields or lower fat content, then perhaps there would be little cause for concern, but some research projects have manipulated bovine genes in order to grow human clones in cow wombs. This process, which was being carried out over a decade ago, engineered over 200 cow-human embryos. In an article dated June 19 2011, The London Telegraph announced that “scientists have found they can create chimeric animals that have organs belonging to another species by injecting stem cells into the embryo of another species.”

A Daily Mail article from 2011 described how scientists have managed to create over 150 human-animal hybrid embryos in British laboratories. The top secret research was conducted by researchers looking into possible cures for a wide range of diseases, but it was labelled as "grotesque" by campaigners against the excesses of medical research.

The article described how the 2008 Human Fertilisation Embryology Act had legalised the creation of a variety of hybrids, including an animal egg fertilised by a human sperm; ‘cybrids’, in which a human nucleus is implanted into an animal cell; and ‘chimeras’, in which human cells are mixed with animal embryos.

The applications of genetic engineering seem to be limitless, encompassing everything from genetically modified foods to human milk in cow’s udders, and the justification for such procedures is that they will ultimately help to feed the planet or aid in disease prevention, but will "playing God" in such a way eventually have catastrophic results?

Read the full article at: unknowncountry.com