Secret Mission Accomplished: Mysterious space plane to land after a YEAR in orbit - and no one knows what it did up there

The experimental Boeing X37-B has been circling Earth at 17,000 miles per hour and was due to land in California in December. It is now expected to land in mid to late June. 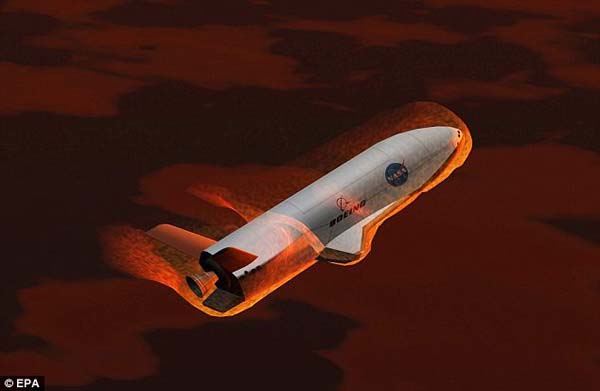 This computer image shows the space plane re-entering Earth. Although it resembles a small space shuttle it is not designed to carry humans. It’s wingspan is a mere 4.5m with a length of 8.9m. It is powered by batteries and solar cells.

At launch, the space plane was accompanied by staff in biohazard suits, leading to speculation that there were radioactive components on board.

The men and women of Team Vandenberg are ready to execute safe landing operations anytime and at a moment’s notice,’ said Colonel Nina Armagno of the U.S. Air Force’s Space Wing.

The plane resembles a mini space shuttle and is the second to fly in space.

It was meant to land in March, but the mission of the X-37B orbital test vehicle was extended – for unknown reasons.

The first one landed last December at Vandenberg Air Force Base in California after more than seven months in orbit.

The 29-foot, solar-powered craft had an original mission of 270 days.

The Air Force said the second mission was to further test the technology but the ultimate purpose has largely remained a mystery.

The vehicle’s systems program director, Lieutenant-colonel Tom McIntyre, told the Los Angeles Times in December: ’We initially planned for a nine-month mission. Keeping the X-37 in orbit will provide us with additional experimentation opportunities and allow us to extract the maximum value out of the mission.’

However, many sceptics think that the vehicle’s mission is defence or spy-related.

There are rumours circulating that the craft has been kept in space to spy on the new Chinese space station, Tiangong.

However, analysts have pointed out that surveillance would be tricky, since the spacecraft would rush past each other at thousands of metres per second.