Set Up To Fail: Gary McKinnon ’no choice’ but to refuse medical test

Jul 20, 2012 Source: bbc.co.uk
Computer hacker Gary McKinnon "has no choice" but to refuse a medical test to see if he is fit to be extradited to the US, his mother has said. 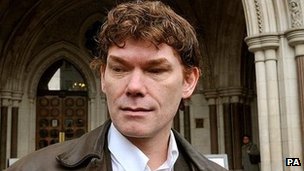 Janis Sharp said it was "an impossibility" because the expert chosen by the Home Office had no experience with Asperger’s syndrome.

Mr McKinnon, from north London, admits hacking US military computers but says he was looking for evidence of UFOs.

If he is convicted in the US, he could face up to 60 years in jail.

The Home Office said the matter would be discussed at a hearing at the High Court on 24 July.

At the last court hearing on July 5, judges were told Theresa May was "close" to making a decision.

But Mrs May said she was "personally concerned" he had not been examined by a Home Office-appointed medical assessor, to decide whether there was a risk of suicide if extradited.

Ms Sharp told BBC Three Counties Radio: "It is not a refusal, he had no choice - it is an impossibility because the assessment they want him to have is by someone who has no experience and wouldn’t be able to diagnose his suicide risk."

They concluded Mr McKinnon was at extreme risk of suicide if extradited and he was currently unfit for trial.

The family’s decision is supported by the National Autistic Society, which has written to the Home Office recommending alternative experts.

At the High Court hearing earlier this month Hugo Keith QC, appearing for the home secretary, said the case had important implications for Britain’s extradition laws.

What is Aspergers Syndrome?

Asperger’s syndrome is a form of autism - it is a developmental disorder that impacts on the individual’s ability to communicate and socialize, among other things. It begins in childhood and persists through adulthood and affects the way the person reaches "common sense" perceptions, as well as the way they process information related to other individuals. People with Asperger’s syndrome find human interaction challenging, and may interpret creative thought and use their imagination in different way from others.

Autism and Asperger’s syndrome are both part of autistic spectrum disorders (ASD). It is a range of related developmental disorders that affect people in many diverse ways and various degrees. However, people with Asperger’s syndrome tend to have average or above-average vocabularies and reach speech milestones at the same time as children in the general population.

Unlike other children (and adults) with an ASD, those with AS (Asperger’s syndrome) have average IQs and are pretty much just as likely to have learning disabilities as those without AS. However, their learning requirements may be different from other childrens’.

Asperger’s syndrome was named after Austrian pediatrician Hans Asperger, who first described the disorder in 1944. However, the syndrome was not recognized as a unique disorder until later on.

Asperger’s syndrome is not a disease, it is a syndrome. A syndrome is a collection of symptoms that occur together with a condition. People with AS have the same life expectancy as in the general population, and are no more or less susceptible to diseases or infections as others. The likelihood of developing depression later on in life is higher for those with AS, but this is probably a consequence of years of living with the stresses and anxieties that come with coping with life in a "non-AS" world.

People with this syndrome can have difficulty with social imagination. They may have trouble imagining alternative outcomes to situations. Make-believe games may seem pointless, impossible to do, or ridiculous. Topics based on logic, memory and systems are more interesting (mathematics, computer science and music). Many children with Asperger’s syndrome are exceptionally talented or skilled in those particular areas.