Jan 10, 2012 Source: reuters.com
A Polish military prosecutor shot himself in the head Monday after cutting short a news conference in what appeared to be a dramatic protest in a turf war between Poland’s civilian and military prosecution services.

Mikolaj Przybyl was taken to hospital in the western city of Poznan after reporters heard a gunshot and hurried back to find him lying slumped on the floor in a pool of blood. 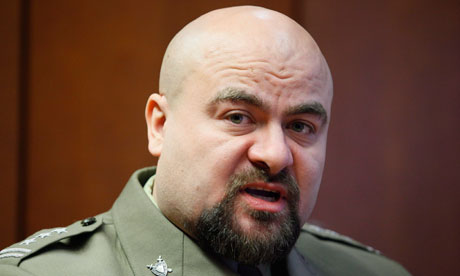 The military prosecutor Mikolaj Przybyl at a press conference in Poznan, Poland, before he is said to have shot himself. Photograph: Marek Zakrzewski/EPA 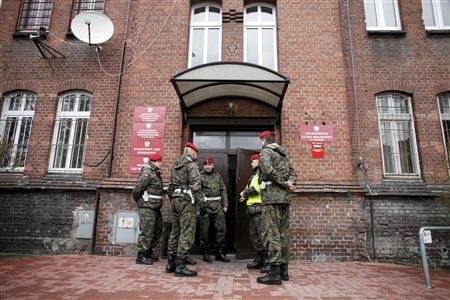 His life was not in danger, officials said, but the apparent suicide attempt quickly triggered a public dispute between the heads of Poland’s military and civilian prosecution services over plans, criticized by Przybyl, to merge the two.

Shortly before the shooting, Przybyl had asked the reporters to leave his office. In his news conference, he had criticized media leaks from the ongoing probe into the 2010 crash that killed President Lech Kaczynski and 95 others, mostly senior Polish officials, in Smolensk, western Russia.

Several news outlets showed footage of Przybyl’s body behind his desk before an ambulance took him to hospital. A doctor later told local media his team was still looking for the bullet that had lodged in the prosecutor’s head.

Parulski accused Seremet, his civilian supervisor, of acting unethically by seeking a separate analysis into the work of the military prosecutors and making it public before a court ruling.

Parulski said Przybyl had faced numerous threats, including a break-in at his flat and damage to his car, aimed at intimidating him and stalling other investigations the prosecutor was leading over possible financial misconduct within the army.

That is why Przybyl had lately been carrying a gun, Parulski added.

President Bronislaw Komorowski said in a statement he was "concerned" about the incident and asked the national security bureau to monitor the situation.

The Smolensk crash investigation remains a very sensitive political issue for Poland and for its relations with Moscow.

Jaroslaw Kaczynski, who leads the main opposition party and was twin brother of the late president, has accused Prime Minister Donald Tusk’s government of collaborating with Moscow to cause the crash and of later conniving with Russia to cover up its real causes.

The government says such claims are absurd.

Since taking office in late 2007, Tusk has tried to improve relations with Moscow that have long been strained over energy, security and other issues. But disagreements over the investigation into the Smolensk crash have chilled the atmosphere.