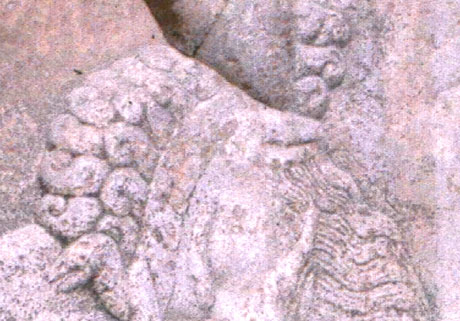 "Hostile Spirit"
This photo shows a closeup of a 3rd century A.D. relief from Iran. The "hostile spirit" Ahriman is depicted as having a crown in the shape of a snake.
Pre-Islamic Middle Eastern regions were home to mysterious snake cults, according to two papers published in this month's Arabian Archaeology and Epigraphy journal.

From at least 1250 B.C. until around 550 A.D., residents of what is now the Persian Gulf worshipped snakes in elaborate temple complexes that appear to have been built for this purpose, the studies reveal.

The first paper, by archaeologist Dan Potts of the University of Sydney, describes architecture and relics dating to 500 B.C. from Qalat al-Bahrain in Bahrain.

Two rooms in what is now known as the Late Dilmun Palace each contain 39 pits, some of which surround what appears to have been an altar. At least 32 of the pits housed ceramic vessels containing bones from rat snakes and sea snakes.

The remains showed no signs of mutilation.

"They were in cloth bags, now badly decomposed, and that might suggest that they had been buried alive, i.e. put into a bag, placed in a bowl, and then buried in the ground," Potts told Discovery News.

Some bowls found at the site have been identified as "wine-drinking" cups. Potts, however, does not necessarily think that wine consumption accompanied the snake rituals, which he speculates were meant to confer protection and good luck.

He described pottery decorated with snakes, snake artwork and even ancient oral traditions, such as the Epic of Gilgamesh, which originated at early Arabic sites and paid homage to snakes.

In the second paper, archaeologist Anne Benoist of the Eastern Archaeology Laboratory at the National Center for Scientific Research in France describes yet another Iron Age temple complex linked to snake cults.

Excavation of the site, at Al Bithnah in the United Arab Emirates, revealed both indoor and open-air altars, chapel-like structures, incense burners, man-made pools of water and numerous vessels and objects decorated with snakes.

Most of the snakes were depicted with triangular heads and scales, which Benoist said suggests "a viper species, which is striking, as they are venomous and therefore dangerous."

Benoist said early Middle Eastern traditions held that snake venom was viewed as "a source of power over life." Snakes are prevalent in Persian Gulf regions.

She pointed out that the association of snakes with power over life even carried over into the Old Testament. One passage describes Moses placing a bronze snake on a pole so that anyone who had been bitten by a snake would be healed upon seeing it.

The seasonal shedding of skin linked the reptile to cycles of death and rebirth, so snakes were probably also connected to fertility.

Potts thinks snake worship originated in India and spread throughout the Middle East. There is evidence for extensive trade and travel between the two areas.

As for the fate of snake cults, Benoist said later religions likely deemed them "superstitious," causing followers to practice snake veneration in secret. Eventually, she said, the cults were "overtaken by the official monotheist religion."