’Soft’ Biometric Cameras Are Watching: Cameras To Recognize People By The Shape Of Their Ears 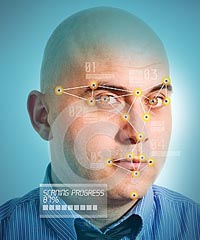 Facial recognition has become an increasingly common element in security surveillance, enabling identification of faces in images taken from a distance and in a crowd. But facial recognition is just a step along the way to more and better identification techniques being sought by the U.S. government’s Intelligence Advanced Research Projects Activity (IARPA). The agency has challenged top research teams to revolutionize how machines recognize people with a competition announced Nov. 8, according to New Scientist magazine.

The announcement on the IARPA website, dated Nov. 8 said, "Intelligence analysts often rely on facial images to assist in establishing the identity of an individual, but the sheer volume of possibly relevant video and photographs can be daunting. While automated face recognition tools can assist analysts in this task, current tools perform best on well-posed, frontal facial photos taken for identification purposes...IARPA seeks dramatic improvements in unconstrained face recognition by funding rigorous, high-quality research drawing on a variety of fields to develop novel representations to encode the shape, texture, and dynamics of a face and new ways to use these techniques for faster and more accurate search and retrieval."

The typical approach requires sorting through frame after frame of camera footage to find ones that offer a good chance for identification, then to attempt to match those images with an existing database, according to New Scientist.

"One of the goals of the IARPA challenge is to see what you can do with discarded data," said Mary Ann Harrison of the West Virginia High Technology Consortium Foundation in Fairmont. The data has "soft" biometrics such as height, gait or what may seem, at first glance, an underutilized body part for identification — ears. "Our main focus has been on ear recognition," said Harrison. "The evidence is that the structure is unique to each person. There is a whole science of the structure of the ears."

Read the full article at: isciencetimes.com

Spy movies and weekend television marathons of CSI have established the powers of fingerprint analysis and facial and iris recognition software to identify criminal suspects. The ear, however, may prove to be an even more effective identification tool than any of these techniques due to a new technology known as the “image ray transform.” Mark Nixon, a computer scientist at the University of Southampton’s School of Electronics and Computer Science and the leader of this technology’s research, recently presented the new algorithm at the Institute of Electrical and Electronics Engineers Fourth International Conference on Biometrics.

The image ray transform technique takes advantage of the tubular features of the outer ear. Rays of light are shined on the ear, and the software analyzes the way light reflects off its curved features and creates an image from this analysis. By repeating this process thousands of times, a clear image of the ear is formed. Subsequently, these curves are translated into a series of numbers that can be used as an identification tool. According to Alastair Cummings, the computer scientist at University of Southampton who developed the program, this method of ear identification boasts a 99.6 % success rate in an identification test with over 250 images of ears. Because ears are not affected by facial expression or by differences in background, Nixon alleges that image ray transform for ears can be used as a reliable biometric indicator.

Despite this potentially promising outlook, there are a number of limitations for the novel technology. For example, some experts question the ability of ears to serve as a practical identification tool because of the possibility of ear transformation with age. Although the ear is fully formed at birth, whether it significantly changes due to aging over time remains a controversial point. Yale Professor of Otolaryngology, Cellular and Molecular Physiology, and Neurobiology Joseph Santos-Sacchi is also skeptical of using the ear as a biometrical indicator. “Additional measures [beyond fingerprints and facial recognition] for identification are always welcome, [but] people more likely will manipulate their ears with jewelry and so on, which can alter the shape of the ear. I do not know how effective it would be using the ears as a substitute for fingerprints, [though the] details of the outer ear are unique to people,” he says. Santos-Sacchi also adds that ears can be easily changed with plastic surgery. Other limitations that need to be addressed for image ray technology include hair and glasses frames covering the ears, insufficient lighting conditions, and varying angles of ear images.

Read the full article at: yalescientific.org