Spider That Builds Its Own Spider Decoys Discovered

Dec 21, 2012 Source: wired.com
A spider that builds elaborate, fake spiders and hangs them in its web has been discovered in the Peruvian Amazon. 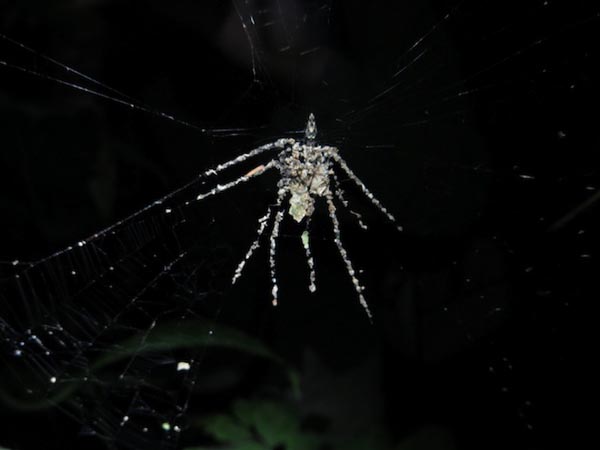 Believed to be a new species in the genus Cyclosa, the arachnid crafts the larger spider from leaves, debris and dead insects. Though Cyclosa includes other sculpting arachnids, this is the first one observed to build a replica with multiple, spidery legs.

Scientists suspect the fake spiders serve as decoys, part of a defense mechanism meant to confuse or distract predators. “It seems like a really well evolved and very specialized behavior,” said Phil Torres, who described the find in a blog entry written for Rainforest Expeditions. Torres, a biologist and science educator, divides his time between Southern California and Peru, where he’s involved in research and education projects.

“Considering that spiders can already make really impressive geometric designs with their webs, it’s no surprise that they can take that leap to make an impressive design with debris and other things,” he said.

In September, Torres was leading visitors into a floodplain surrounding Peru’s Tambopata Research Center, located near the western edge of the Amazon. From a distance, they saw what resembled a smallish, dead spider in a web. It looked kind of flaky, like the fungus-covered corpse of an arthropod.

But then the flaky spider started moving.

A closer looked revealed the illusion. Above the 1-inch-long decoy sat a much smaller spider. Striped, and less than a quarter-inch long, the spider was shaking the web. It was unlike anything Torres had ever seen. “It blew my mind,” he said.

So Torres got in touch with arachnologist Linda Rayor of Cornell University who confirmed the find was unusual. “The odds are that this [species] is unidentified,” she said, “and even if it has been named, that this behavior hasn’t previously been reported.” Rayor notes that while more observations are necessary to confirm a new species, decoys with legs — and the web-shaking behavior — aren’t common in known Cyclosa. “That’s really kind of cool,” she said.