Norfolk has once again been shown to be a treasure trove of archaeological finds after a second timber circle was uncovered off its coast.

The Bronze Age wooden structure was first discovered in the late 1990s on the beach by Holme-next-to-Sea, and tests have now revealed it dates back to the summer of 2049 BC.

That’s the same year as the timber used to build the original Seahenge circle, discovered in Norfolk in 1998 was felled. 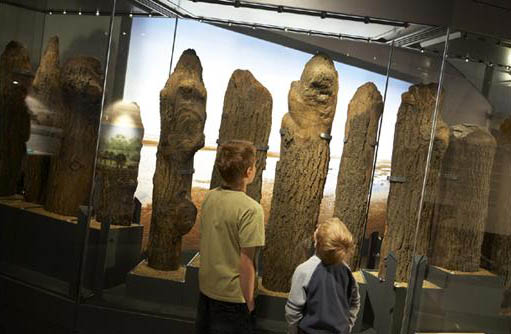 Specifically, research by Norfolk County Council’s historic environment team has confirmed that Seahenge’s sister circle was made from trees felled in the spring or summer of 2049BC.

Heralded as one of the greatest discoveries of the late 20th century, the iconic timber circle of Seahenge, also known as Holme I, sparked controversy when it was discovered, over whether it should be dug up and preserved for posterity, or left where it was.

The timbers came from a circle 21ft (6.6m) in diameter, comprising 55 closely-fitted oak posts, each originally up to (10ft (3 metres) in length.

This latest find looks similar to the original circle, and features two oak logs laid flat at its centre, surrounded by posts.

It has led archaeologists to again question why ancient people built the mysterious oak circles, during the early Bronze Age.

David Robertson, historic environment officer with Norfolk County Council, said: ‘The felling date on them is the spring or early summer of 2049 BC.

‘Those trees were felled at exactly the same time. Having one was fantastic - and having two just adds to the story.

‘We have to try to understand not just why they were built, but what were they used for.’

One theory is that the upturned stump was the final resting place of an important person after death, where his or her body would be allowed to break down in the open air.

The second circle could have been the burial place, or mound, where the wooden posts acted as a revetment, or sloping structures, into which soil was placed on top of the body.

While the results confirm it was almost certainly built by the same people as Seahenge, Robertson said the second structure would not be excavated.

‘Since 1999 it’s been visible at some times and covered by the sand at other times,’ he said.

‘There are no plans to dig it up.

‘It’s been decided with the second circle to let nature take its course. Over the years, the sea has claimed parts of the structure.’

Unlike the giant boulders of monuments such as Stonehenge, the only evidence for most prehistoric timber structures is post holes in the ground. However in Norfolk, because the salty silt preserved the wood, the two circles at Holme Beach are the only ones in Britain to have been dated precisely, to 2049BC.

In 1999, images went round the world of druids and other protesters chanting, weeping and trying to block the diggers from dragging the ancient timbers of Seahenge out of the silt and removing them from the beach.

It was the eerie beauty of Seahenge, with the posts half submerged in the waves surrounding the upended stump of a giant oak tree, which made it international news. But the protesters who demanded it be left on the beach missed the second Bronze Age circle, just visible at the lowest tides.

The circles were discovered at the same time, but while some of the conserved Seahenge timbers are now on display in the museum at Lynn, the other was never excavated.

The Seahenge timbers revealed the oldest marks of metal axes ever found in Britain, showing that bronze tools were being used for complex woodwork within a century of the introduction of bronze smelting. The marks of at least 36 separate axes were found, suggesting that its construction was a major communal project.