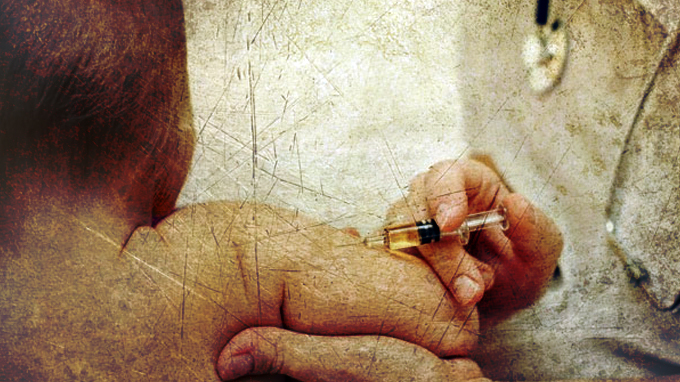 Editor’s Note: This study has not been widely discussed. It came out right as the big Ebola scare was taking off. Considering the debate over the MMR vaccine and the current measles outbreak, and considering the White House just granted immunity to the CDC Whistleblower to testify (although he’ll likely lie or wind up dead, that’s just how things go in this corrupt country these days), this study is more than relevant to revisit today.

While The Daily Beast, a left-leaning establishment-supporting outlet, raises a claim the study below is inaccurate here (and, if you look even today, the place seems to love to sling around the phrase “anti-vaxxer”), the actual article on TDB never even addresses the study’s data itself or the conclusion, but instead employs a logical fallacy strawman argument against said study authors (not seeming to even research who they are specifically) and even the journal the study is published in, never actually addressing the data itself or its findings.

The bulk of the argument by TDB claims the study is correlation, not causation, but why after studying the official government databases for 15 years of vaccine records in the United States, United Kingdom, Australia, and Denmark were they able to find a direct correlation systematically throughout the entire data set that linked change points in autism directly to the times at which vaccines developed with human fetal cell tissue lines were introduced on a mass scale? That’s incredibly troubling and obviously warrants further investigation.

Yes, correlation does not automatically automatically equal causation, but that doesn’t mean it should be automatically dismissed either. Far from it, this is a very compelling clue that something is not right and further study is absolutely needed to make sure there’s nothing here. Considering that none of the establishment scientists are doing that study or even ever addressed these findings, that’s very revealing. In fact, this is the first study ever to even examine the question of a relationship between human fetal cell line vaccines, specifically look at when they were manufactured, and the insane rise in autism.

Read the study for yourself and read the article below. The lead author is a PhD in Molecular and Cellular Physiology from Stanford University, with 23 U.S. patents and over 20 years in commercial biotechnology experience who has now chosen to dedicate her career to speaking out against using human fetal cells in products for health and safety reasons. Why should that automatically discredit her or this data? Because she’s against Soylent Green?

Beyond that, who thought it was a good idea to shoot people up with human fetal cells in the first place, anyway? Doesn’t it make sense that could trigger switches? Furthermore, the issues of a vaccine being regulated to have >10ng of DNA per dose and all doses analyzed having between 142ng and 2,000ng seems more than slightly disconcerting considering the vaccines in question — the MMR, hepatitis A, and the chickenpox vaccines — are given to one-year-old children simultaneously in this country.

Autism And Cancer Related To Human Fetal DNA In Vaccines. Study New Study In Journal Of Public Health
From: globalresearch.ca

A new study published in the September 2014 volume of the Journal of Public Health and Epidemiology reveals a significant correlation between autism disorder (AD) and MMR, Varicella (chickenpox) and Hepatitis-A vaccines.

Even more alarming, Dr Theresa Deisher, lead scientist and SCPI founder noted that, “Not only are the human fetal contaminated vaccines associated with autistic disorder throughout the world, but also with epidemic childhood leukemia and lymphomas.”

Their study comes on the heels of recent breaking news that the CDC deliberately withheld evidence of the significant increase in autism among African-American boys who were vaccinated prior to 36 months of age.

So it should come as no surprise that the FDA has known for decades about the dangers of insertional mutagenesis by using the human fetal cell lines and yet, they chose to ignore it. Instead of conducting safety studies they regulated the amount of human DNA that could be present in a vaccine to no greater than 10ng.

“There are a large number of publications about the presence of HERV (human endogenous retrovirus – the only re-activatable endogenous retrovirus) and its association with childhood lymphoma,” noted Dr Deisher. “The MMR II and chickenpox vaccines and indeed all vaccines that were propagated or manufactured using the fetal cell line WI-38 are contaminated with this retrovirus. And both parents and physicians have a right to know this!”

Certainly these discoveries by SCPI should generate an immediate investigation by FDA officials, if not an outright ban on the use of aborted fetal cell lines as substrates for vaccine production. There are numerous other non-human FDA-approved cell lines that can and should be used.

Dr. Theresa Deisher is a PhD in Molecular and Cellular Physiology from Stanford University with over 20 years in commercial biotechnology, prior to founding AVM Biotechnology and Sound Choice Pharmaceutical Institute. As an inventor of 23 issued US patents she is world-renowned for her work in adult stem cell research and the first to discover adult cardiac derived stem cells. Dr. Deisher was a plaintiff in the US federal lawsuit to prohibit the use of taxpayer dollars for embryo destructive research, which resulted in steering science towards adult stem cell research and 14 US FDA approved adult stem cell products.

Radio 3Fouteen - Jon Rappoport - The Individual vs. The Planned State

Radio 3Fouteen - Jon Rappoport - The Artist Against the System