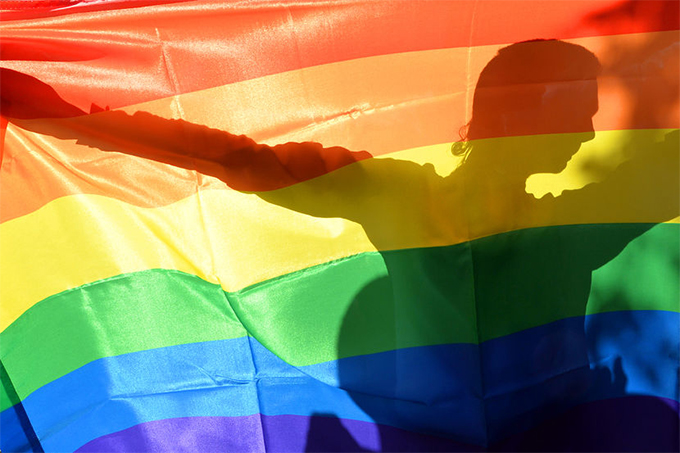 A rehashed 2012 study claims that if a person has distaste for homosexuals or does not strongly support them then they are probably secretly gay themselves.A Jewish lecturer and psychologist Netta Weinstein conducted a study in which she concluded, “Individuals who identify as straight but in psychological tests show a strong attraction to the same sex may be threatened by gays and lesbians because homosexuals remind them of similar, unrealised desires they themselves harbor.”

Weinstein’s co-author of the study Richard Ryan, a professor of psychology at the University of Rochester adds, “The findings provide new empirical evidence to support the psychoanalytic theory that the fear, anxiety, and aversion that some seemingly heterosexual people hold toward gays and lesbians can grow out of their own repressed same-sex desires.”

In other words, liberal academics have found a more intelligent-sounding way to upgrade that old school yard taunt, “I know you are but what am I?”

This is one of the oldest claims of the rainbow crowd; to dismiss other people’s views on homosexuality, gay marriage and gay parenting by claiming that anyone who isn’t on their side is just ashamed of their own secret gayness. The problem with this argument is that it does not hold up to logic. If people secretly love the things they hate, does that mean that someone who hates pedophiles and wants to see them go to jail for life is secretly a pedophile themselves? Does a Jew who hates Nazis secretly have anSS uniform hiding in his closet because deep down he really wants to be a Nazi? If you hate the taste of celery does that mean you secretly love it? 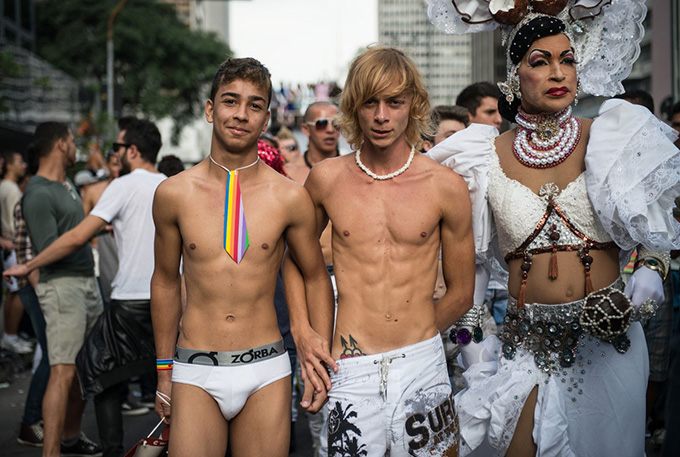 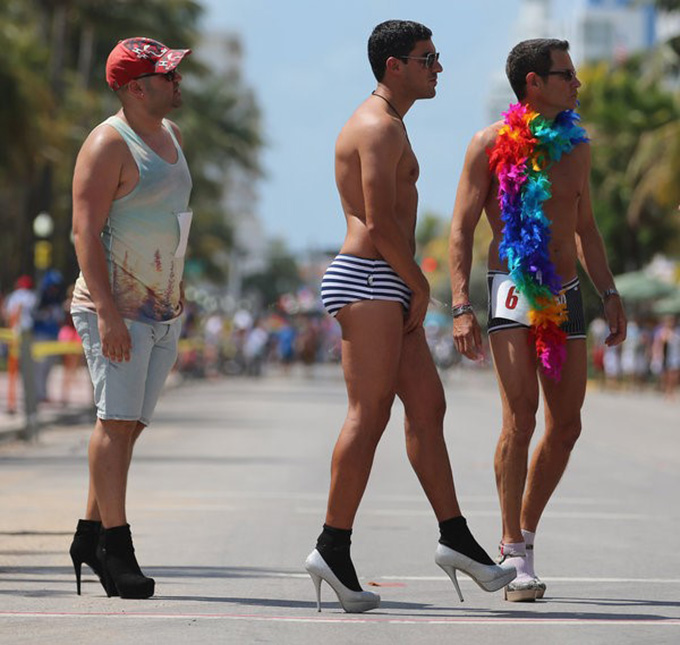 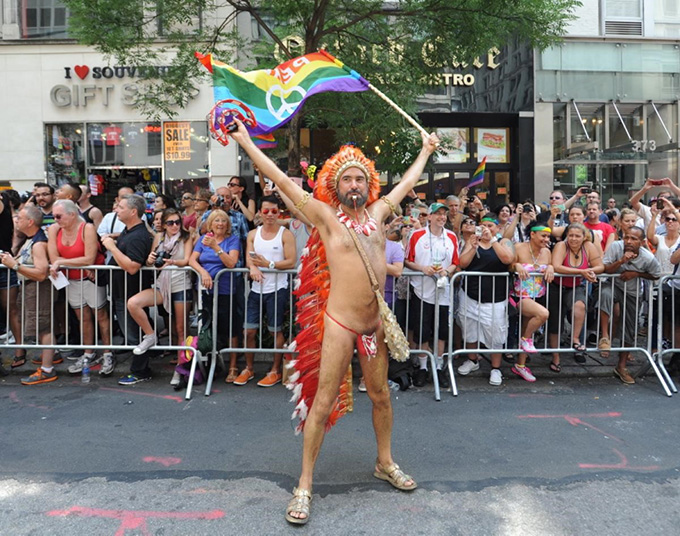 (This is how we all feel little buddy.)

It should be noted these were some of the cleaner pictures from gay pride parades. Most of the pictures would not be appropriate to put on this website. What Weinstein and many pro-gay activists don’t seem to get is that not everyone wants to see people (of any sexual orientation) walking around naked and having sex in the street in broad daylight because that is not appropriate behavior for civilized society. Not all heterosexuals (who make up about 97% of the population) want to see a constant barrage of gay characters on every show on television, and what is wrong with that? Is it wrong to have a preference? We are attracted to those who are most like ourselves. Black people like to watch other black people. Mexicans like to see other Mexicans. Heterosexuals are more comfortable seeing other heterosexuals, but in today’s PC world not doing backflips over the 3% of the population that identify as LGBTQ is the equivalent of being Hannibal Lecter. No one is allowed to have a different opinion lest they be destroyed.

No one knows this better than Melissa and Aaron Klein, an Oregonian couple who ran a bakery called Sweetcakes by Melissa. Due to their religious beliefs the couple politely declined to make a cake for a lesbian wedding. They were taken to court where the judge ordered them to pay $135,000 for discrimination as well as the “pain and trauma” the lesbian couple claimed they felt after being denied service. Because of the fallout from all the media exposure, the Kleins were forced to close their business. They have also received numerous hate emails saying everything from Aaron should be raped to hoping that their five children get sick:

Nice to see pro-gay supporters expressing the tolerance they believe in so much. Perhaps it is this very type of rhetoric that is making people not as supportive of the gay rights movement as they once were.The Zio media as well as the many well-funded gay activists have successfully cultivated a feeling of victimhood in many homosexuals as well as a feeling of entitlement to consistently shove their sexual preferences onto the masses with no concern over the effects of their behavior on society and certainly not on the effect of children who should not be exposed to such things at early ages. This disrespect can be seen on a frequent basis now as gays seek to take over events that have absolutely nothing to do with homosexuality and turn them into their own personal self-serving rainbow crusade.

Take one of this year’s St. Patrick’s Day parades for example. In Manhattan the previous ban on gay groups marching was lifted to allow one group the right to do so which was Out@NBCUniversal, a group consisting of about one hundred delegates from NBCUniversal, most of who identified as gay, bisexual, or transgender. In an article regarding the event, NewYork Times reporter, Tatiana Schlossberg stated:

“After decades of conflict and debate, the parade’s organizers announced in September that they would lift the ban on openly gay groups marching under their own banners in the parade, which is as much a celebration of Ireland and Irish culture as it is of St. Patrick himself.”

St. Patrick’s Day, or Lá Fhéile Pádraigas true Irish might call it, honors the day of the death of Patrick the patron saint of Ireland. What this has to do with someone’s sexual orientation is not clear. In fact, it makes about as much sense as a vegan butcher. 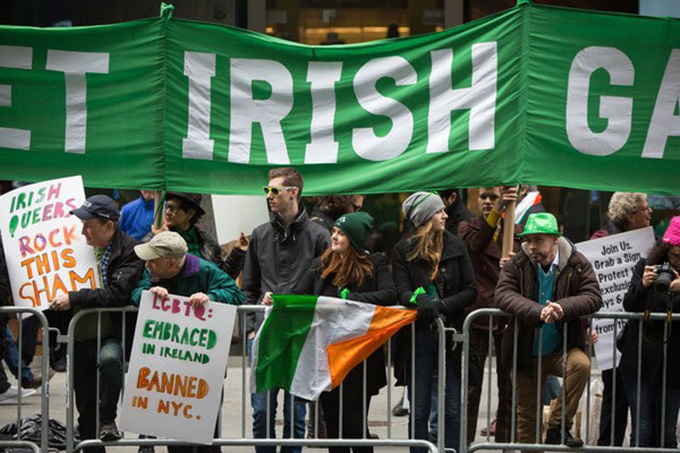 This is not the first time family-friendly fare has been invaded by the rainbow coalition either. Many parents and conservatives were shocked to see drag queens performing a number from the musical Kinky Boots at the 2013 Macy’s Thanksgiving Day Parade.

Imagine sitting at home with your kids sipping hot cocoa, enjoying the festivities when this appears on your screen:

This debacle was courtesy of Grand Marshal and Creative Director Amy Kule and Bill Schermerhorn: 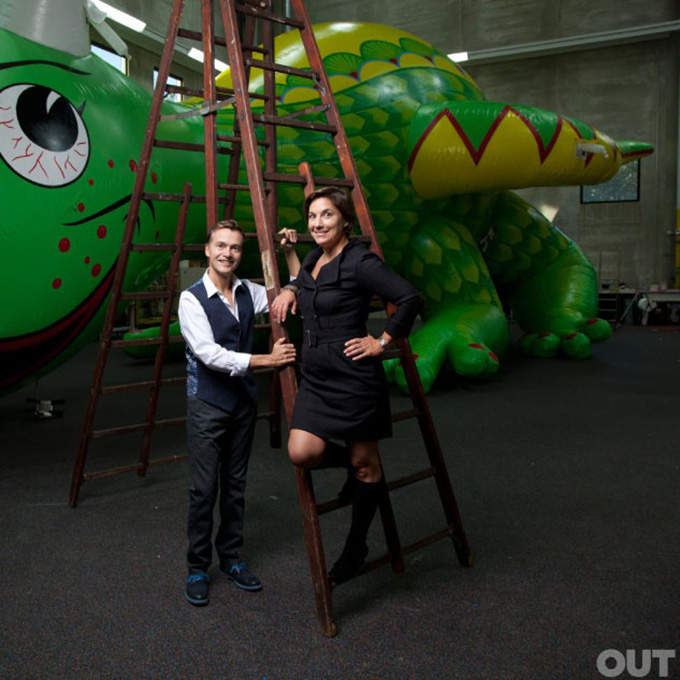 Kule and Schermerhorn are both gay so their choice to feature a musical about cross-dressing and drags queens was probably just a weird coincidence. Who knows? Maybe this year’s parade will have gay men dancing in thongs and Miley Cyrus twerking on an Elvis float because if you’re going to scandalize Americans on a beloved national holiday why not go all out with it?

The point is many people simply do not wish to see this kind of behavior out in the open. When one is in their own home it is absolutely their business what they choose to do with other consenting adults but when that is brought out into the street, it then affects society which allows others the right to say something about it.And why are homosexuals now a special protected class who are not subject to the ramifications of committing indecent exposure like everyone else? Why do they get a pass to have sex in the street but Christians, conservative Àsatruars and others with traditional beliefs,don’t get to express their opinion that the union of marriage is a sacred one between a man and a woman without being painted as cartoonish bible-thumping hate mongersby the mainstream media?

What Netta Weinstein and other agenda pushing psychologists’ need to realize is that for most people having an aversion to homosexual activity is a very natural reaction and not, as they claim, some sort of suppressed projection of homosexuality. After all, why would a red-blooded straight man want to watch a gay James Bond or see two dudes kissing on primetime?

As everyone painfully learns in childhood, not everyone is going to like everyone else. Should people who were nerds in high school sue the jocks for not accepting them? Should women who were goth girls sue the women who were cheerleaders for not welcoming them to their clique?

The good news is the Stalin-esque tactics of the gay mafia will continue to push more and more people away from their cause and if conservatives stay resilient and hold to their values,the Zionist elite will not achieve their goal of brainwashing children into thinking that openly perverted behavior and promiscuity with anyone and everyone is okay. One day children will grow up in a world where the desires of the 3 percent are not pushed on the 97 percent, and no one will be accused of being secretly gay if they are repulsed by gay men having sex in the street.