Comment: Pat Condell is right about a lot of things, but he is also wrong about a lot of things. Why does he never recognize that there are jewish interests behind the mass immigration of muslims into Sweden? Why does he not see this glaring contradiction? We have for example Barbara Spectre from Paidea, who says that jews are behind multiculturalism and that they will be at the center of the destruction of Sweden and Europe. She also receives tax money from Sweden to do this noble activity. There is also jewish activist Anetta Kahane who say that "you have to really change the policy of immigration inside Europe." and that "they can anymore not only be white or only Swedish or only Portuguese or only German." We also have Count Richard Nicolaus Coudenhove Kalergi, the founder of the Pan European movement who has advocated for the eradication of the native European race. He also advocated Jewish supremacy, as they are a "superior race," as he writes in his 1924 book "Practical idealism." Yes Pat Condell, mass immigration into Sweden and other western countries is a big problem, and yes there are a lot of traitorous politicians in Sweden, but when will you recognize that there are many jewish people lobbying and advocating for this open border policy? When are you going to figure out what really is going on? 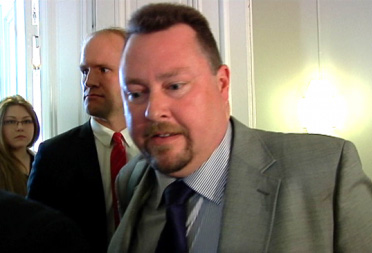 Sweden Democrat Party politician Michael Hess of Karlskrona was sentenced today (May 8, 2014) to a fine for hate speech after having connected the religion of Islam with rape.

The indictment concerned a comment on Facebook that Hess wrote next to an article in Aftonbladet, which was about women who were raped in Tahrir Square in Cairo.

“When are you journalists going to realize that it is deeply ingrained in Islamic culture to rape and mistreat those women who do not abide by the teachings of Islam? [Data] is widely available showing the connection between the rapes in Sweden and number of migrants from Middle Eastern and North African countries,” wrote the SD politician.

Hess, who has lived in the Middle East for eleven years, argued that the comment did in fact initiate a debate and persuade journalists to examine the phenomenon more deeply.

As proof of his innocence, Michael Hess including a summary of studies showing that men with ancestry from Muslim countries are very much overrepresented in Swedish rape statistics. This includes official figures from the National Council, which show that men from North Africa and Iraq are involved in rapes 23 and 20 times more often than Swedes.

Alderman Lise-Lotte Backstrom and the three Social Democratic jurors at Blekinge District Court, however, took no account of the politician’s objections, and fined him 32,000 krona ($4,900 US) for “hate speech”.

“It is [...] apparent to the court that Michael Hess has meant for readers of his commentary to read the entire statement in the same context and thus readers will get the impression that it is Islamic beliefs that lie behind the rapes when the perpetrators are of Middle Eastern or North African origin. The statement expresses a blatant disrespect towards Islamic immigrants,” reads the judgment.

Hess’s statement is not to be regarded as “part of an objective criticism” and the research that Hess had referred to during the trial is irrelevant.

It does not matter if the statement is true

The court notes that “the question of whether Michael Hess’s statement is true, or at least for Michael Hess appeared to be true, is irrelevant to the proceedings.” The reason is that the SD politician submitted research support after [making the statement on Facebook].

In order for the statement to be classified as “objective criticism” Hess would have had to refer to any relevant research directly in the Facebook post.

“At the time [of the initial statement] , Michael Hess made no reference either to established research or Islamic sources. It is only in connection with his prosecution that he has sought to demonstrate support from research and religious writings. The District Court therefore finds that it is clear that Michael Hess’s statement has not been a part in an objective and authoritative discussion.”

LINK to the original: http://www.friatider.se/sd-politiker-d-ms-f-r-islamkritik

More of the same: Swedish prosecutor takes a page from the Soviet manual - Artist might be declared insane, to have him committed

Here is your status of Free Speech in Sweden:

This preview of an anti-Islamic amateur film was held on a college campus in Sweden, 2012.

The audience was made well aware of its contents before viewing, - they all understood that the film was blassphemous against Islam and all of the people attending were affiliated with the college in question, the vast majority of them being students from the college.

- And yet still the Muslim students couldn’t control their reaction to the viewing and flew into an hysterical rampage, attempting to destroy the film projector in the process and screaming out cries of "Allah Akbar".

How many times must we sane Europeans explain to "Liberals" (aka Cultural Marxists), that ’MULTICULTURALISM DOES NOT WORK?!...’ - At least not for those of us who actually value the maintenance of Western civilized values...