#SwedenAttack: The Truth About Sweden

President Trump has fired off two tweets in response to the media firestorm over his comments on Sweden at the rally in Melbourne. The Lügenpresse created a straw man that Trump was referring to a terrorist attack when he was really talking about the refugee crisis:

Give the public a break - The FAKE NEWS media is trying to say that large scale immigration in Sweden is working out just beautifully. NOT!

My statement as to what's happening in Sweden was in reference to a story that was broadcast on @FoxNews concerning immigrants & Sweden.

President Trump was similarly ridiculed by The New York Times when he predicted the Brussels terrorist attack in January 2016 two months in advance:

The mounting refugee crime crisis in Sweden has been a hot topic on the Alt-Right for several weeks now. It has actually been discussed in our circles for months, even years, but the Lügenpresse is scoffing at the notion that it is even an issue:

“LONDON — Swedes reacted with confusion, anger and ridicule on Sunday to a vague remark by President Trump that suggested that something terrible had occurred in their country.

During a campaign-style rally on Saturday in Florida, Mr. Trump issued a sharp if discursive attack on refugee policies in Europe, ticking off a list of places that have been hit by terrorists.

The New York Times published yet another story dismissing the reality of refugee crime in Sweden:

“LONDON — President Trump escalated his attack on Sweden’s migration policies on Monday, doubling down on his suggestion — based on a Fox News report — that refugees in the Scandinavian country were behind a surge in crime and terrorism.

Mr. Trump set off consternation and ridicule on Saturday when he seemed to falsely imply to an adoring throng at a rally in Florida that a terrorist attack had occurred in Sweden, which has admitted tens of thousands of refugees in recent years. …

“This is bad journalism,” Mr. Goranzon said. Mr. Horowitz did not respond to a request for comment.

Mr. Lofven, the prime minister, told the newspaper Expressen on Feb. 7 that Mr. Springare was exaggerating. “I have a hard time seeing that 100 percent of the police’s investigative capacity is occupied with crimes perpetrated by immigrants,” he said.”

This article is why President Trump calls them the FAKE NEWS media. The Social Democrats have plummeted in the polls.

A few weeks ago, Peter Springare, a policeman in Twitter, ignited a major controversy when he spoke out on Facebook about immigrant crime: 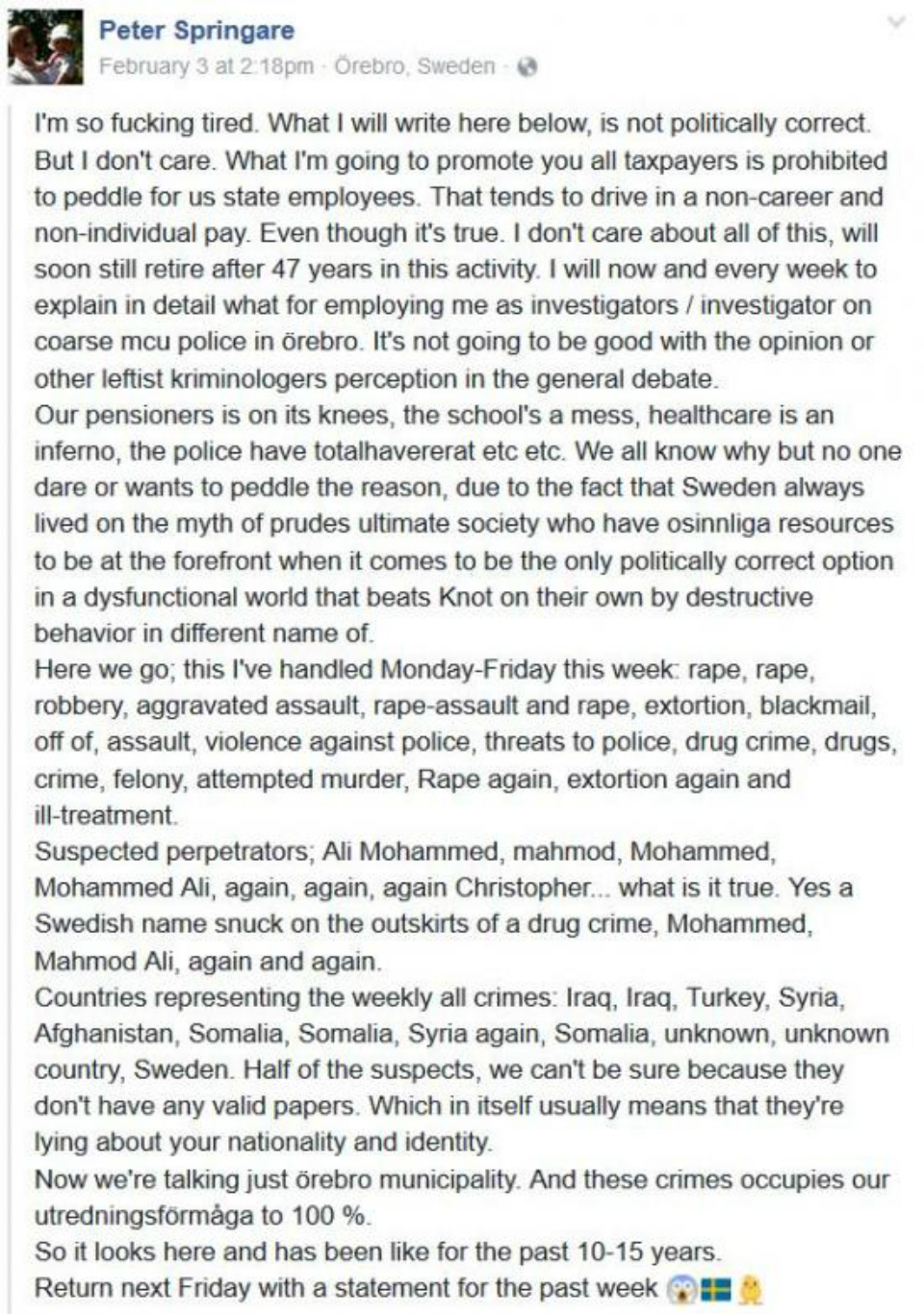 It was later announced that Springare is being investigated by the Swedish government. It has sparked a blossoming movement in Sweden called the Swedish Spring.

Read the rest at AltRight.com.