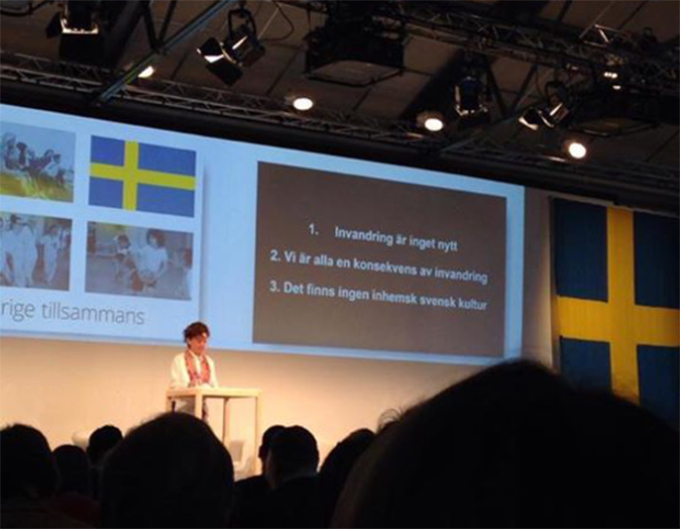 The conference, which was hosted and launched by Swedish Prime Minister, Stefan Löfvén, was rife with anti-White ideology, such as the statements in the above image.

The slide in the image above says:

“1. Immigration is nothing new.”

“2. We are all a consequence of immigration.”

“3. There is no indigenous Swedish culture”

This made people quite upset on social media.

Ingrid Lomfors is the woman standing at the podium in the picture, and she has a very conclusive past, which makes it obvious that she is anti-White to the core.

During the conference, Prime Minister Löfvén called on them to welcome fake refugees. He also offered “special entrance” into the “100 club“, a business club for businesses who give 100 fake refugees a job.

“Companies that provide at least 100 new arrivals the opportunity to show what they can do in the labor market have a special entrance to the Employment Service and together tailor to initiatives which create opportunities for the companies to receive the new arrivals.“

Notice how he calls them “new arrivals” – that’s now the politically correct way of saying illegal immigrants and fake refugees.

Going back to the anti-White rhetoric in the image, one thing worth pointing out is that they deny Swedes (and White people) exist, because then they cannot be accused of White Genocide against Swedish families.