Swedish prosecutor takes a page from the Soviet manual - Artist might be declared insane, to have him committed

Swedish Artist Dan Parks might be declared mentally insane (so that he can be easily locked away). His real crime is that he has offended Sweden’s prevailing state ideology that mass immigration is an unquestionable boon to the country. The state believes only lunatics could think differently!

---
Swedish prosecutor takes a page from the Soviet manual
From: Dispatch International

Even before he has been sentenced, Swedish street artist Dan Park has already been jailed for repeating an offense he may not have committed and the prosecutor wants him declared insane. 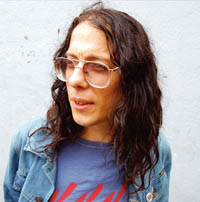 Whatever one may think of the Swedish street artist Dan Park, there is no denying that he has a gift for attracting publicity.

On March 19 he was accused of ”denigration of ’folkgrupp’” (”folkgrupp” is the Swedish term for specially protected segments of the population, such as Muslims, Gypsies, homosexuals and women – but not the original Swedes nor men in general).

This is the second time Mr. Park has had to answer for denigration. Among his most recent crimes is to have displayed a sign with the text ”Zigenarbrott är något gott” (”Gypsy crime is fine”) and a picture of three African heads with a noose around their neck. The text reads: ”Hang-on Afrofobians”. 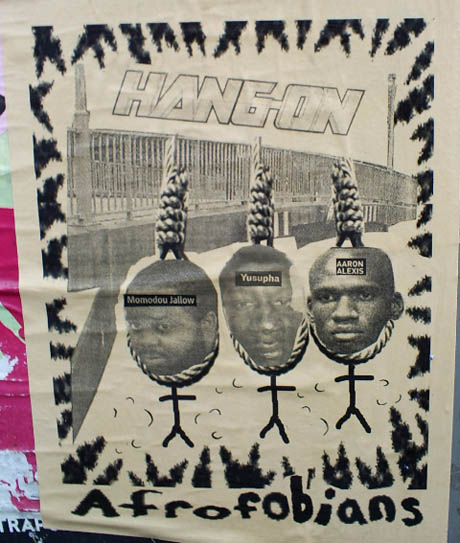 According to the prosecutor, this must be seen as clear encouragement to lynch blacks. Dan Park has a different explanation: It is a satirical presentation of reality, precisely because – contrary to claims that Sweden is full of ”Afrophobes” – people of color are not persecuted in Sweden. There are no blacks hanging from the trees in Malmö. Nonetheless the spokesman for the Swedish Afroförbundet (The Association of Africans) claims that Africans are being grievously hounded. This is the hypocrisy Dan Park says he has tried to expose.

Exposure of hypocrisy was also the intention behind the text about Gypsy crime being fine. It is a fine thing for those on the politically correct left whose aim is to benefit by presenting gypsies as unjustly maligned and thus playing the victimization card.

Whether Dan Park has succeeded in stating his case is a matter of opinion and there is no doubt that the public prosecutor thinks he has failed miserably.

The Malmö court is yet to pass sentence on whether Dan Park has committed a crime or not.

On March 20, the day after Dan Park’s arraignment, Dispatch International published an article about his case, showing the pictures that are now under adjudication. – a common journalistic practice, it would appear, in any country enjoying the rule of law.

Dan Park republished DI’s article on the same day, which caused the prosecutor to have him arrested and jailed for having repeated a crime that had not yet been determined to be a crime. In fact, all Dan Park had done was to republish an article anyone could read by clicking on to Dispatch International.

But worse was to come a few days later, when prosecutor Magnus Pettersson asked the court to force Dan Park to undergo a psychiatric examination – seemingly based on the contention that the unfortunate artist’s action might be ascribed to clinical insanity.

In other words, we have a crime that has not been determined to be a crime. We have a repeat offense that may not be an offense because there may not have been a crime in the first place and on this basis the representative of the Swedish state has a man put in prison and forced to have his head examined.

There is every indication that Dan Park’s real crime is to have offended against Sweden’s prevailing state ideology that mass immigration is an unquestionable boon to the country and that only lunatics could think otherwise.

The Public prosecutor’s use of Soviet-style methods has caused Dispatch International Chief Editor Ingrid Carlqvist to leave Sweden for fear that she may be next in line to be locked up in some insane asylum.

---
Good-bye Sweden – you won’t get me for insanity
From: Dispatch International 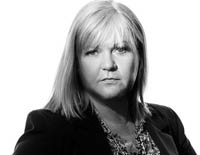 Prosecutor Magnus Pettersson in Malmö simply cannot understand how the artist Dan Park thinks. Park has been hauled into court for denigration of ”folkgrupp” (specially protected groups of people) but is unwilling to learn – he publishes his pictures again! The prosecutor has an explanation: He must be clinically insane.

At first I didn’t believe it. When I interviewed prosecutor Magnus Pettersson yesterday, he didn’t utter a word about his intention to subject street artist Dan Park to a psychiatric examination. But here is the proof – an entry from the lower court in Malmö to the effect that the prosecutor believes Park suffers from a psychiatric illness.

The method is well known from the Soviet Union where thousands of dissidents were brought down by means of fake diagnoses of insanity.

The KGB successfully used the procedure to send political dissidents to psychiatric hospitals. As historian Anne Applebaum writes in her book Gulag: A History of the Soviet Camps:

”In the aftermath of the Thaw, the authorities began once again to use psychiatric hospitals to incarcerate dissidents – a policy which had many advantages for the KGB. Above all, it helped discredit the dissidents, both in the West and in the USSR, and deflected attention away from them. If these were not serious political opponents of the regime, but merely crazy people, who could object to their hospitalization?

With great enthusiasm, the Soviet psychiatric establishment participated in the farce. To explain the phenomenon of dissidence, they came up with the definition of ’sluggish schizophrenia’ or ’creeping schizophrenia’. This, scientists explained, was a form of schizophrenia which left no mark on the intellect or outward behaviour, yet could encompass nearly any form of behaviour deemed asocial or abnormal. ’Most frequently, ideas about a ”struggle for truth and justice” are formed by personalities with a paranoid structure,” wrote two Soviet professors, both of the Serbsky Institute.”

Prosecutor Pettersson is not entering virgin territory. He is following in the footsteps of the Soviet Communists. Whoever opposes Sweden’s immigration policy or stands up against the country’s race hysteria must of course be clinically insane – there can be no other explanation for clearly there is nothing wrong with the immigration policy and clearly racism is widespread in Sweden.

If, like Dan Park, you write that ”Gypsy crime is fine” [”Zigenarbrott är något gott”] with the intent of exposing how the extreme left profits from victim mentality, you must be mentally ill. Any sane person would of course realize that those on the far left are good people who merely want to defend the poor victims of Swedish racism.

I’m at a loss to find words that can explain my horror at the path chosen by prosecutor Pettersson. If Dan Park is forced to undergo a psychiatric examination and is diagnosed as insane, many of us will be forced to flee from Sweden. This risks opening the door to the totalitarian society which many of us feared was approaching but believed was a future prospect.

Let us once again listen to the two Soviet professors:

”A characteristic feature of overvalued ideas is the patient’s conviction of his own rectitude, an obsession with asserting his trampled ’rights’, and the significance of these feelings for the patient’s personality. They tend to exploit judicial proceedings as a platform for making speeches and appeals.”

As clear as it could be. The more you talk about your rights, the more insane you must be. I don’t doubt for a second that in the eyes of some prosecutors even I stand to be accused of harboring paranoid ideas about a ”struggle for truth and justice” and of ”reforming society”. This was the diagnosis used to vilify among others the dissident author and scientist Zhores Medvedev.

I have been wavering back and forth – stay in Sweden and fight the insanity or flee in order to observe it at a distance? Now I have made up my mind. Farewell Sweden – I’m leaving. One cannot live in a country where dissidents are treated like psychiatric patients and where the authorities wish to lock up social critics in mental institutions.

That’s the bad news. The good news is that I will continue to scrutinize the Swedish madness – but from the other side of the Sound.

Read the full article at: d-intl.com

For more about the real Sweden, the Nordic Model, and Reflections on a "Social Utopia" check out:

What You Didn’t Know About Sweden