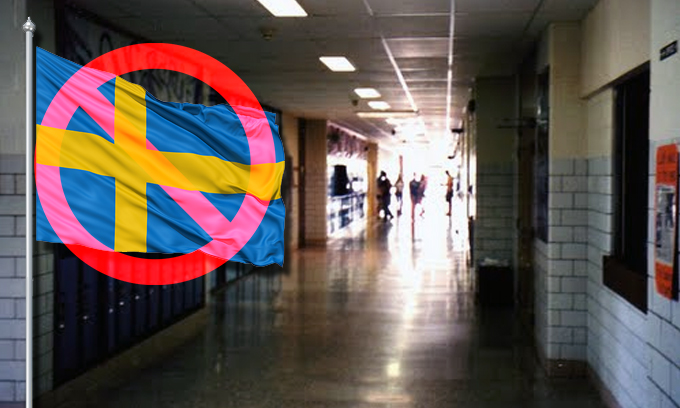 The Swedish flag has now been banned at a primary school in Sweden. The reason is that the flag may be offensive to certain groups and breaking the law "offensive against ethnic groups."

The sensational ban is introduced at Söndrum school in Halmstad. Use of the flag is now only allowed on the national day or when foreign students are invited.

In an internal letter to school students and their parents who were sent out just before Christmas, the school principal writes that "no other use of the Swedish flag is allowed", according to Nyheter idag.

Swedish flag can be perceived as racist

The reason for the ban is a masquerade which was held at the school recently where one of the students chose to paint his face blue and yellow. He also have brought a toy gun to masquerade.

The school management reacted very strongly and now prohibits both the Swedish flag and toy weapons.

- Will stop this before it goes too far, says the school's principal, Hans Åkerlund to Nyheter i dag.

- We strive to help students not do stupid things when it comes to flags and weapons.

Akerlund also believes that by using the Swedish flag one may be guilty of violating the racism law.

Source: Sweden: The Swedish flag was banned at elementary school by the principal (Translated)