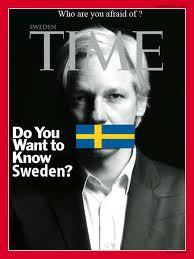 It is a machinery where man-hating radical feminists with no grasp of feminism’s legacy, journalists who wield power but have no real understanding of the purpose of journalism, and members of the judicial system who want to make a career out of the equal rights and opportunities doctrine work hand in hand.

What is happening in Sweden today is unworthy of a country that calls itself a democracy.

But that’s not all! Julian Assange’s case has revealed the true face of Swedish patriotism as well. Whosoever dares criticize this propaganda machinery risks being either ignored or condemned through guilt by association.

But I take this risk because, after all, I am a journalist and a feminist in Sweden, and the right of freedom of expression also applies to me, even if I am critical.

Julian Assange’s affairs in Stockholm opened the floodgates for the downgraded variants of feminism and journalism that are present in Sweden today.

The preliminary investigation protocol detailing Julian Assange’s liaisons with two women makes for shocking reading for a Swedish feminist pioneer of the 1970s.

I am one of those who, as the host for many years of the legendary women’s program Radio Ellen on Swedish Radio, fought for women’s rights and equality between the sexes.

I could never have dreamt that a legitimate struggle for equal rights and opportunities for both women and men would degenerate into state feminism devoid of common sense and reason.

Those of us who pioneered feminism in Sweden in the 1970s fought for our sexual freedom and for the right to take responsibility for ourselves, but we also fought to be able to, like men already do, enjoy sex.

Sexual liberation went hand-in-hand with the demand that we as women must be able to support ourselves and not be economically dependent on men. This is essential because only when we women are economically independent will we be able say ’no’ if we feel we are being sexually used. Being a feminist is not about hating men. Feminism is about strengthening women’s self esteem, not about making ourselves into victims or being categorized by the state as victims by default.

But in today’s feminist Sweden, the following can happen. In the preliminary investigation minutes for the case of Julian Assange in Sweden, I read: Woman A. says about her relationship with Julian Assange: "I was proud as hell to get the world’s coolest man in bed and living in my apartment." After having sexual intercourse on numerous occasions, she goes to the police.

How did Sweden’s sexual revolution of the 1970s transform into an oppressive 21st century power apparatus where men are portrayed as potential enemies and threats to the state? A state in which those who criticize the prevailing system are denied a voice in the media.

Liberation feminism was hijacked in the late 1980s when it was disarmed and renamed ’Jämställdhet’ (the equal rights and opportunities doctrine) and co-opted into the power apparatus. Jämställdhet became the state norm and an ideology in Sweden. And it became a career ladder, especially in politics, civil service and in the judicial system.

Many pioneering feminists disappeared into Swedish universities, where they transformed our struggle into ’scientific knowledge’, and became elite feminists. They got money from the State, as universities in Sweden are publicly funded. Instead of talking about ’the sexes’ they started talking about ’genders’, and the struggle no longer focused on transforming the state apparatus: it switched to targeting the male sex and men as sexual creatures. The present totalitarian gender ideology was also promoted by the Swedish media, which does what is required from it by the State.

In today’s Sweden, the media is dedicated to educating the population rather than to keeping power in check.

When it comes to Julian Assange there are, naturally, underlying motivations. He challenged media by doing what every journalist dreams of: a global Scoop!

What Julian Assange and WikiLeaks did was wound the pride of many journalists.

Every journalist dreams of getting The Scoop, but very few manage to pull it off.
The Swedish tabloid Expressen tried to turn Julian Assange himself into the scoop with the headline: "Manhunt for Wikileaks Julian Assange - suspected of rape in Sweden."

Some hours later the investigation was cancelled. It was later re-opened by a new prosecutor, Marianne Ny, who clearly holds radical feminist views. She collaborates with the politician, lawyer, and former Jämställdhet ombudsman, Claes Borgström.

But the bloodthirsty media forces initiated a hunt without checking the facts of the case and without waiting for a trial. Instead, the media became judge and jury because the politically correct approach in today’s Sweden is that women are always victims and are blameless when it comes to sex.

That fact that the media behaves like some kind of people’s court of mob justice in the case of Julian Assange is very serious; the media whipping up a hostile sentiment against Julian Assange before he has even been brought to trial in a Swedish court is in violation of his human rights. It is a grave state of affairs when Sweden’s biggest newspapers won’t even publish his own words.

The media should not take the role of the courts by speculating about a case before due process has been carried out and judgment rendered. The media’s role is to examine the facts and show respect for the rule of law in a democracy.

Sensationalist headlines, tabloid journalism based on rumor and personal antagonism is not journalism. It is simply a way of selling newspapers and cheating the public. This form of Swedish journalism is unworthy of a democracy.

Worst of all is the fact that Julian Assange has been under house arrest in England with an electronic tagging device on his ankle for over 500 days. He does not want to go to Sweden because he fears that Sweden will extradite him to the United States.
Julian Assange’s case raises serious questions about human rights violations in the democratic country we call Sweden. But the media will not report on this. It is preoccupied with creating as much antagonism towards Julian Assange as possible.

Does Sweden Inflict Trial by Media against Assange?

Also tune into Red Ice Radio for more on the subject: