Oct 29, 2015 By Henrik Palmgren | redice.tv
When will this insanity cease to surprise you?

This pice of s**t ran on Swedish state owned television (SVT) just a few days ago. Aimed at children, it is preaching a kind of "we are all one - hear our voice" message, but the symbolism is where the real clear message lies in this production. Even a brain dead liberal whose an open borders advocate should be able to figure this out. 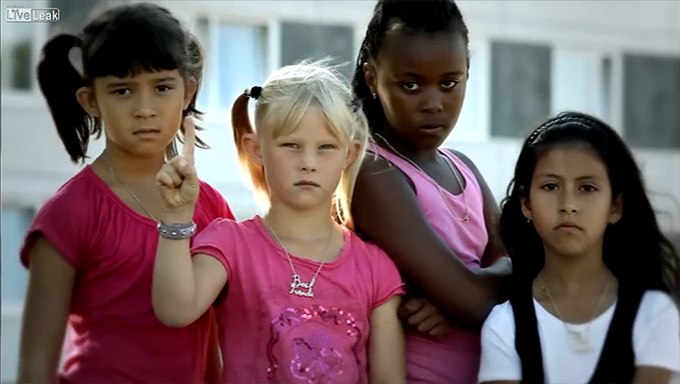 The one finger salute is of course the One unified Ummah – the symbol that the Sunni Islamic state use to demonstrate their goal of a worldwide Caliphate. (More pictures below).

Known as the “Finger of Tawheed” to represent the oneness of God, this hand symbol is common among Salafis and jihadis both in photographic poses and following beheadings. It’s a symbol of victory.

Oh and also, while watching the video could you spot the few Swedish children that are left in these classrooms?

Big congratulations to the establishment and the 68ers in Sweden for making your children and your grandchildren a minority in their own country! Well done!

This is the lyrics of the chorus:

Oh, I'm sure we will remember this period for a long time to come.

This is what another source writes about the "stick it" finger gesture:

[It] has been used by jihadis for years, including high profile ones like Osama bin Laden. Within the jihadi context, the raised index finger takes on political meaning as well, widely rejecting any form of government not ruled under Shariah law, and is the symbol of Muslim victory over the infidels, where the entire world “finally” rules only under one Islam – the Salafi Sunni Islam. All under one singular umbrella. No other culture or country is allowed to exist. Everything will turn into Saudi Arabia’s Mecca and the infidels will finally realize that they were ignorant and were following falsehood. They will have so much gratitude to the Muslims for leading them to the only true religion the whole world will reverberate to the Shahada.

This Swedish/ISIS love story is not an isolated event. Just earlier this year the Swedish employment office was discovered to be a recruiting center for ISIS. They had to fire the entire network of "immigrant resettlement assistants" because it was found to operate as a recruitment network for ISIL/ISIS.

Individual immigration officers, who are immigrants themselves, have also been exposed as jihadist sympathizer.

In Gothenburg alone, at least 150 people have left the city, dubbed the "Swedish centre for jihadists," to join ISIS and Christians have been Ordered to Convert or Die as they declared a "European Caliphate" recently.

A journalist was recently Stoned While Trying To Film In Swedish No Go Zone (Despite that no go zones continues to be denied by the left, they don't exist they say).

The brain dead "progressives" in Sweden seek to destroy their own culture (if it even exists according to them) by importing a foreign incompatible culture that goes against virtually EVERYTHING that is Scandinavian.

They have a sickness in the mind and they aim to destroy everything that signifies their own Nordic culture. Including the people themselves. This pathological self hate has also been pushes as a moral virtue upon gullible and naive Swedes, so it's not entirely our own fault.

... but now they are also doing it to our children.

They are going to be the true victims of this madness.

Victims of the violence, hate and rape that comes with nightmare of multiculturalism, terrorism and religious conquest.

What kind of country will they grow up in?

What will it be like for them, as they become minorities in their schools and then later in their own country?

Will many of them even make it into adulthood?

Sweden is a country that was founded and built with the intention to benefit the descendants of those hard working people that fought for and procured the territory. It was not to be handed away to ungrateful, bitter people that seek to dethrone the people of the country that has welcomed them. Pushing "White privilege" and White guilt on these young children.

It's sick. This is sick and it's wrong. It's immoral and horrifying. It's genocide!

Listen to Red Ice Radio for more on this madness:

Ingrid Carlqvist & Conrad - Sweden, Get Ready for the Collapse

More radio on What you didn't know about Sweden