Syrian rebels consider joining forces with regime troops to fight al-Qa’ida (of course! why not?) 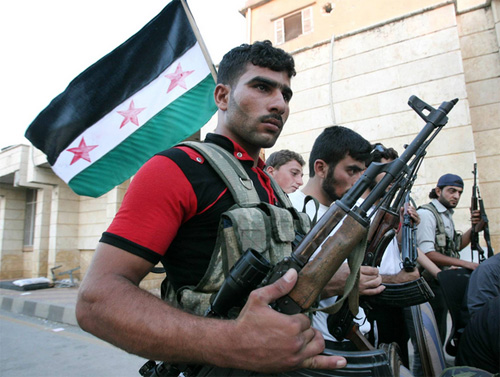 The old adage to ’love thy enemy’ takes on new meaning with news that the western-backed Syrian Rebels may join forces with Assad-regime troops in order to struggle against al-Qa’ida.

Since 2011 the factions that compose the Free Syrian Army have been clashing with Syrian government troops in civil war ( in also what many have described as a western-backed mercenary insurgency). The two sides have waged bloody conflict that has allegedly involved war crimes and chemical weapons attacks on civilians.

Could this issue get more confusing?
Certainly, with the addition of continued western intervention and destabilization!

[...]the U.S. has been funding the Syrian opposition since 2006 … and arming the opposition since2007. (In reality, the U.S. and Britain considered attacking Syrians and then blaming it on the Syrian government as an excuse for regime change … 50 years ago (the U.S. just admitted that they did this to Iran) . And the U.S. has been planning regime change in Syria for 20 years straight. And see this.)

Indeed, the the New York Times has reported that virtually all of the rebel fighters are Al Qaeda terrorists.

The Syrian rebels are now calling for terrorist attacks on America. And we’ve long known that most of the weapons we’re shipping to Syria are ending up in the hands of Al Qaeda. And they apparently have chemical weapons.

And yet the U.S. is stepping up its support for the Islamic extremists.

Congress need not be worried about the ’terrorists’ in Syria. Everyone’s schedule is REALLY overbooked there at present. So many factions to fight and then join, so little time...

More on strangely shifting alliances from The Independent:

The spectre is looming of a second Syrian civil war with the head of the opposition’s official forces declaring that he is prepared to join regime troops in the future to drive out al-Qa’ida-linked extremists who have taken over swathes of rebel-held territories.

General Salim Idris, the commander of the Free Syrian Army warned that in particular Isis (Islamic State of Iraq and al-Sham), with thousands of foreign fighters in its ranks, was “very dangerous for the future of Syria” and needs to be confronted before it becomes even more powerful.

Western security agencies now believe that Syria poses the most potent threat of terrorism in Europe and the US from where hundreds of Muslims have gone to join the jihad. MI5 and Scotland Yard’s anti-terrorist branch recently tackled the first case of men sent from there specifically to carry out attacks in London.

One senior Western intelligence official stressed that the Syrian regime’s forces must be preserved for the battles ahead against the Islamists and the need to avoid the mistakes made in Iraq and Libya, where the army and police were disbanded with the fall of Saddam Hussein and Muammar Gaddafi, allowing terrorist groups to rise in a security vacuum.

The official held that talks between the regime and rebels set to take place in Geneva in January could be the beginning of the formation of an anti-al-Qa’ida front in Syria, along with a negotiated settlement to end the conflict which has claimed more than 117,000 lives so far and made millions refugees inside and outside the country.