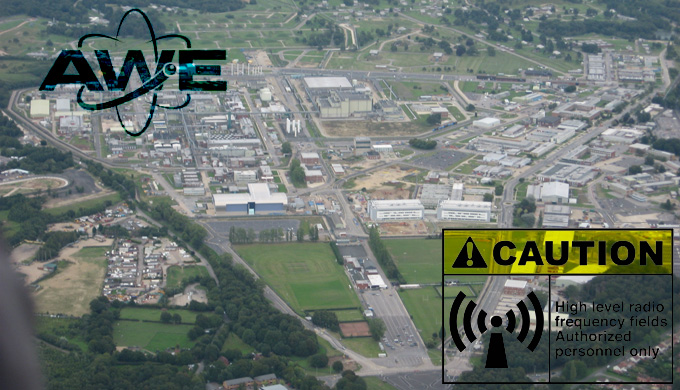 Villagers in Hampshire, near the world-famous Watership Down hill, fear they have become the latest victims of a ‘black hole’ mystery which has hit other parts of Britain.

One family, the Smiths, were baffled when their heating, shower, doorbell and even their cars’ remote door locks refused to work and they discovered similar problems were being experienced by their neighbours in Kingsclere.

They spent much of the festive season without heating and lights after the failure of household systems that rely on digital technology, specifically radio-frequency identification (RFID).

Chris Smith, whose wife’s birthday on Christmas Eve was ruined by the systems failure, spent more than £250 trying to fix the heating and shower but neither worked until late on December 27, according to the Newbury Weekly News.

He has speculated that secret experiments at the nearby Atomic Weapons Establishment at Aldermaston military base - which builds and maintains the warheads for the country’s nuclear Trident missiles - are responsible.

But a spokesman for Ofcom, which oversees radio communications, had a more mundane explanation.

He said: ’Often these problems can be caused by a video sender - that transmits a television signal to other sets in the house. They are not the source of all the problems but in a lot of cases interference is tracked down to those devices.’

But Mr Smith, who had the heating system installed 18 months ago, said he did not know of anyone nearby with a video sender. However he did think it was odd that his heating, shower and doorbell began working again late on December 27, at the end of the Christmas break.

In October the residents of Dimond Road, Southampton, reported that their remote car key fobs had stopped working. The problem was tracked down to a faulty video sender which was ‘leaking’ a frequency that interfered with the fobs.

Residents in a street in Windermere, Cumbria, had similar problems in March 2010, which were eventually traced back to a wireless device used to take orders at a nearby restaurant.

Mr Smith said he spent much of Christmas reading manuals and making phone calls in an effort to get the heating fixed.

Although the boiler was running, the wireless thermostat on the heating system and the digital shower stopped working.

He told the Newbury Weekly News: ‘It was a rather cold and smelly Christmas.’

A heating engineer called to the house in Ash Grove, Kingsclere, had to move his van 100 metres up the road because his key fob also stopped working and it was the only way he could get out of range of whatever was causing the problem.

The Smiths had called the emergency engineer after realising that despite having hot water, the shower, which had a digital control, did not work at all.

When the heating engineer finally arrived, he had to phone them from the doorstep to be let in because the doorbell, which also operated via a wireless connection, had failed.

When the engineer inspected their heating system he found that the fault was with the wireless communication system.

But when he returned to his van to collect a tool to try to fix the problem, his vehicle failed to unlock using the remote controlled key.

Having eventually found a way to get into the van, he installed not one, but three new communication units in the boiler before giving up and telling the family that the problem must be external to their system and it was also affecting other homes in the village.

Mr Smith said: ‘We spent Christmas without central heating and had the additional cost of buying an electric heater for the children’s bedrooms and extra logs for the wood burner.’

The total cost for the repairs, which did not get the system back up and running, came to £200.

He said ‘Through Facebook, we learned that we were not alone and that all over the village people were having problems with remote controls, car locking, etc.’

It meant the entire village had become a sort of digital ‘black hole’ with families relying on hi-tech gadgets discovering that nothing worked.
It wasn’t until about 5pm on December 27 that everything suddenly started working again - but nobody knows why it all decided to come back on and what had caused the problem in the first place.

Mr Smith has now concluded that the common link between the failed devices was that they all used radio-frequency identification (RFID).
But he said: ‘The question is, what caused the blocking of the RFID frequency in the village and how do you even begin to find out?
‘Kingsclere is in the shadow of the Hannington television transmitter, so it could have been engineering work that went wrong and unnoticed over the holiday period.’

The Hannington television and radio transmitter serves the surrounding area, and the company responsible for it, Arqiva, admit that a strong signal from it could affect RFID devices, but say on this occasion they were not to blame.
What’s more, even electronics academics are baffled by what’s happened.
Patrick Gaydecki, Professor of Digital Signal Processing at the University of Manchester, told MailOnline: ’Without going down there with a whole load of test equipment I wouldn’t be able to speculate on the source of the problem.

’It’s almost certainly radio frequency interference. All the devices mentioned are UHF, which operate between 300 and 450MHz, and there’s a wealth of devices that use those frequencies, so it could be anything.

’However, video senders operate in UHF around 5.8GHz, so it might not be one of those. Mobile phones operate at 1GHz, quite close to a microwave oven, so it could be mobile phones or a repeater mast. But the mystery is why it’s happening now and not continuously.’

There is some speculation that the source is military.

Intriguingly, Kingsclere is about eight miles from the top-secret Aldermaston atomic weapons base and is also used frequently by RAF Chinook helicopters which fly over the surrounding countryside.

Mr Smith added: ‘Kingsclere is also close to any number of military or scientific establishments that could have been responsible for this, but I doubt any would discuss this problem.’